Achieving climate goals might not save the coral reefs 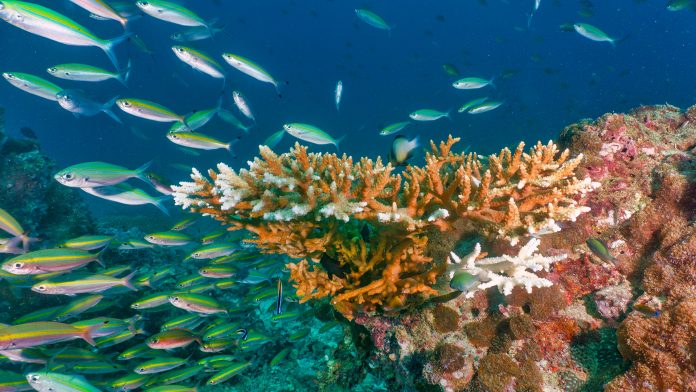 Research highlights that a rise in global warming by 2oC could result in the loss of cool areas in the sea called thermal refugia that protect coral reefs from increasing temperatures.

In certain areas, local ocean dynamics, such as upwelling and strong currents, were thought to safeguard the effects of warming seas. However, researchers say that thermal refugia cool spots, that help to mitigate climate change effects on the corals, could start to rapidly decline as seas warm, no be no longer able to save the coral reefs.

Coral reefs support the majority of the world’s marine biodiversity and about a billion people rely on them for their livelihoods and food security. Adele Dixon, a researcher at the Priestly International Centre for Climate at the University of Leeds and lead author of the study, published this month in PLOS Climate, stresses the importance to protect the coral reefs. The study puts the value of goods and services from coral reefs at $2.7 trillion (tr) per year.

“As we lack the resources to protect coral reefs everywhere, we need to decide which reef areas to protect. Our team decided to identify areas least exposed to future climate change and which reefs have the greatest chance of survival,” Dixon explained.

Dixon and her research team discovered that about 85% of the world’s coral reefs are situated in the thermal refugia but predict a drop to less than 1% if temperatures rise 1.5oC above pre-industrial levels. While small areas of thermal refugia may remain, particularly in the East Indian Ocean Sumatra-Java region, the likelihood of a catastrophic total loss of coral reefs is high if temperatures rise by 2oC, warns Dixon.

“Our research reinforces the stark reality that there is no safe limit of global warming for coral reefs. Following the COP26 climate summit in Glasgow, in which some progress was made towards the 1.5oC target, our findings exhibit that 1.5oC is still a substantial amount of warming for ecosystems on the frontline of climate change,” Dixon commented.

“At 1.5oC of warming, thermal refugia will disappear from all but 12 regions worldwide: Polynesia and the Coral Triangle in the western Pacific Ocean. Refugia will be lost from regions such as Oman, the Caribbean, Colombia, and Indonesia.”

“Identifying refugia locations related to the greatest threat (heat stress causing coral bleaching and mortality) helps to locate priority areas for management,” explained Scott Heron, co-author and researcher with the Physics and Marine Geophysical Laboratory in the College of Science and Engineering, James Cook University. “It is important to understand where climate change disturbances will occur. The broad scale of impacts points to the urgent need for significant action on the causes of climate change”.

The need to save the coral reefs

Oceanographer, Mark Eakin, added: “This study provides further support for the threat the climate crisis poses to coral reefs around the world. While numerous reefs have been safe from frequent, severe bleaching in the past, this study shows that at even the most optimistic Paris Agreement level of global warming, very few of the world’s reefs will be spared.”

He believes that sanctuaries that are resistant to or recover from chronic stress will still be present. “There will be coral reef sanctuaries but fewer that avoid chronic heat exposure. Therefore, there is a need to evaluate where resistant and recovery sanctuaries are located to reduce the number of additional threats that these reefs experience, such as fishing and pollution.

“Coral in the Coral Triangle, for example, have lower sensitivity to stress than those in the Indian Ocean and Caribbean. Some reefs are frequently exposed to stress and the corals there are adapted whereas others are not and, therefore, not adapted,” concluded McClanahan.