Why American critical minerals are key to revolutionising electric vehicles

Meeting forecast demand growth for electric vehicles will require a number of critical minerals and alloys. Not all are readily available from reliable supply chains. Do minerals buried beneath the farm fields of southeast Nebraska in the central US represent one of the keys to meeting this challenge?

In southeast Nebraska, a highly unique underground mineralogical structure known as the Elk Creek carbonatite deposit was created several hundreds of millions of years ago. This large carbonatite orebody hosts the Elk Creek Critical Minerals deposit, which is enriched in strategic metals such as niobium, scandium, titanium, and all of the rare earth elements. Together, these critical minerals represent some of the most vital ingredients to the success of a wide variety of greenhouse gas reducing technologies, including electric vehicles (EVs), renewable energy systems, light-weight transportation systems, and high-efficiency motors and appliances.

Why are these particular metals so important? What roles do they play in these technologies, and battery technology for electric vehicles in particular? What opportunities does their development present to manufacturers, consumers, government leaders, and investors?

As public and private sector leaders work together to combat climate change through greater use of electric vehicles, much of the current effort is focused in three areas:

In all three areas, Nebraska’s suite of critical minerals is coming into increasing global focus.

Some of the most intense research and development efforts today in the EV space are focused on increasing the energy storage capacity and rapid re-charge capabilities of lithium batteries. In both areas, niobium and scandium promise to potentially deliver large technological and economic advances.

For example, researchers and battery manufacturers have found that adding niobium to the cathode of a lithium battery can help to significantly improve the battery’s performance, including increasing its energy density and long-term stability. Niobium also helps to reduce the amount of cobalt needed in these batteries, an important goal sought by EV manufacturers and governments alike.

A metal with no harmful and toxic properties to humans, niobium is also being examined as a critical additive to the anode component of these batteries. There, it can increase the power density of the battery, reduce charging times, provide greater chemical stability, and allow the battery to operate with a higher safety margin. In fact, niobium has been shown to enable lithium batteries to be recharged to 100% capacity in six minutes or less.

Another of the NioCorp’s critical minerals – scandium – also is positioned to play a critical role in the development of what is considered the ‘Holy Grail’ of lithium battery technology: the solid-state lithium battery.

Liquid electrolytes are currently used in virtually all lithium batteries as a means of allowing electric current to flow between the battery’s electrodes. The downside of liquid electrolytes? They are corrosive and can be flammable under certain conditions.

By contrast, solid-state electrolytes are expected to deliver higher voltages, better operation across different temperature environments, greater power density, and safer operation. Researchers from Lawrence Berkeley National Laboratory and Argonne National Laboratory recently found that a material called magnesium scandium selenide spinel operates exceptionally well as a solid-state electrolyte. These magnesium-based batteries have the potential to hold twice as much power as lithium batteries, and scandium is one of the keys to their success.

However, light-weighting vehicles can have a downside: potentially reduced physical protection for drivers and passengers in the event of crashes and other mishaps. Fortunately, both niobium and scandium can play major roles in light-weighting EVs while also increasing their safety margin.

For example, when niobium is added to steel in very small amounts – often less than one-tenth of 1% by weight – it adds significant strength and corrosion resistance to the resulting alloy. In fact, just one pound of niobium added to one ton of steel effectively doubles the steel’s yield strength.

Niobium-strengthened steel, referred to as High-Strength, Low-Alloy (HSLA) steel, allows for less steel by weight to be used in vehicles. That reduces overall vehicle mass, and that results in greater energy efficiency and vehicle range between battery charges.

Niobium’s benefits are not limited to electrified vehicles. Virtually every steel chassis vehicle on the planet today, including internal combustion engine models, uses niobium to reduce weight and better protect passengers. Weight reduction achieved through niobium-strengthened steel increases fuel economy, which reduces air emissions on a per-mile basis. For example, adding only about US$9 of niobium to a mid-sized car reduces the vehicle’s weight by 100kg.1 That, in turn, increases its fuel efficiency by 5%. And that leads to a significant decrease in vehicle air emissions per mile.

What is more, niobium’s benefits in the transportation sector extend beyond electrified and conventional vehicles. For example, niobium-containing steel is widely used in roads, bridges, tunnels, and other mega-steel infrastructure. In addition to improving performance, safety, and useful lifespan of these systems, niobium-contained steel also helps to reduce environmental impacts and greenhouse emissions. For example, approximately 0.025% of niobium was added to the steel of the Millau Viaduct bridge in the south of France. But that small addition reduced the weight of steel and concrete by 60% in the overall project, dramatically reducing air emissions and environmental impacts across virtually all segments of the project’s supply chain and construction activities.2

The role of Scandium in advanced transportation

What niobium does for steel, scandium does for aluminium. Adding small amounts of scandium to aluminium alloys make them readily weldable, more corrosion resistant, and highly resilient against bending. Scandium also increases aluminium’s yield strength by up to 150%. These benefits of scandium promise extraordinary benefits to both surface transportation and aerospace applications.

In addition, the corrosion properties of scandium mean the metal can permit aluminium to replace titanium in lower temperature service (>300°C), where corrosion is the key requirement. Examples include vehicle turbochargers and heat exchangers.

The commercial aviation sector is especially excited at scandium’s potential. For one, scandium can save airlines money because it can eliminate the need to rivet aluminium components. Scandium acts to stabilise the grain structure in the vicinity of welds, meaning aluminium parts can be welded quickly and efficiently. This in turn means that aircraft can have thinner skins in some locations and can eliminate the weight of rivets wherever aluminium alloys are used. For a B737 flying 3,250 hours per year and using American Airlines’ cost of capital and the US EIA projections for future fuel price inflation, the present value of fuel savings driven by scandium alloys (assuming a 15% aircraft weight reduction) amounts to a little over $9m. The cost of added scandium, even at a price of $3500/Kg oxide, and assuming an average 0.7% by weight scandium doping level, is around $800,000 – a savings-to-cost ratio of 11:1.3

Rare earths and EVs: will there be enough?

If there is one group of critical minerals that are absolutely essential to the future of electrified transportation, it is the rare earths. NioCorp’s Elk Creek Project has the potential of producing significant amounts of rare earth products, particularly the magnetic rare earths.

Most of the 14 naturally occurring lanthanide rare earth elements are used in modern vehicles today, as the accompanying graphic illustrates. 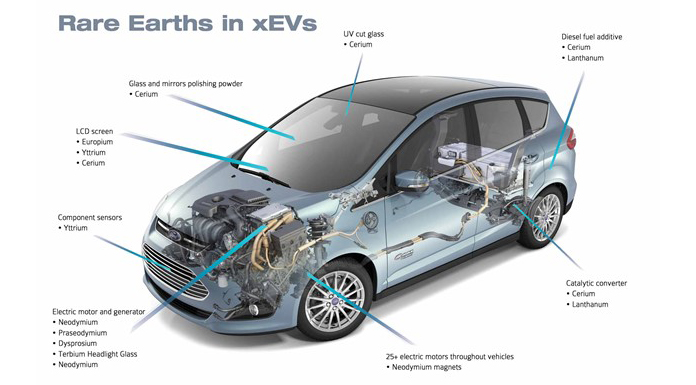 Some of the most important, particularly for electrified vehicles, are those rare earths that have magnetic properties, such as neodymium, praseodymium, dysprosium, and terbium. When combined with iron, boron, and some additional elements, these rare earths help make the world’s most powerful permanent magnets, known as neodymium-iron-boron (‘NdFeB’) magnets.

Why are permanent magnets important to cars and trucks? Because they help to power the dozens of small electric motors scattered through virtually all modern cars and trucks in a way that reduces vehicle weight, increases energy efficiency, and reduces greenhouse gas and other harmful air emissions.

In electrified cars and trucks, NdFeB magnets are also increasingly vital to the largest motors in the vehicle: those associated with the vehicle drive train.

Demand for the magnetic rare earths is forecast to grow sharply in the coming years as EVs and wind turbines capture greater shares of their respective market, as the forecasts below demonstrate.

The result of these supply/demand imbalances?

Clearly, greater production of rare earths from a variety of sources, particularly those outside of China, will be essential to the success of the EV revolution.

NioCorp’s Elk Creek Project has significant quantities of rare earth elements in its ore body. That means that production costs of rare earth products, if NioCorp elects to produce them, will likely be low when comparted to mining projects that produce rare earths as a primary product.

Diversity of supply: what Nebraska critical minerals also brings to the table

The Earth’s crust has an abundant supply of all of these critical minerals. However, their production can often be concentrated in a small handful of regions or nations. Such a lack of supply diversity presents a serious obstacle to the efficient operation of the complex global supply chains that feed into the manufacture of electrified vehicles. That increases risk to manufacturers whose products rely on these materials. For many EV manufacturers, geographic diversity of critical minerals supply is near the very top of their worry list.

This is yet another reason why there is increasing attention paid by investors and others to the planned production in Nebraska of NioCorp’s critical minerals.

As the map below shows, current production of niobium and scandium are highly concentrated in only a handful of countries. Niobium is produced at a significant commercial scale in only two nations (Brazil and Canada). Scandium is produced in very small quantities in only four nations. Regarding rare earth elements, China remains the dominant producer (>80%) of these strategic materials.

When NioCorp’s Elk Creek Project comes into production, the mine and processing facility are expected to be the sole producers of niobium and scandium at commercial scale in the US. In all, the project is expected to produce the following quantities of its primary products:7

Where to learn more about NioCorp