As countries around the world aim to tackle climate change, will electric cars be able to assist the global clean energy transition?

Governments across the world are encouraging the switch to electric cars as part of the global effort to combat climate change. California recently enacted regulations to require 100% of new vehicles sold in the state must be electric, hybrid, or hydrogen-powered by 2035. The UK Government is more ambitious, intending to end the sale of new petrol and diesel vehicles by 2030 and for all new cars and vans to be fully zero emission at the tailpipe by 2035.

Consumers appear to be embracing electric cars; in 2021, 190,000 battery-powered electric cars were sold in the UK. This was more than the five previous years combined, and nearly one in eight of all new cars sold. We have all seen more electric cars on the road, and public transport is not being left behind. First Bus recently announced that it has placed one of the UK’s largest electric vehicle bus orders. So, the switch to electric seems to be well under way.

To cope with the increasing electric cars on our roads, carparks, workplaces, and homes are including charging stations. The UK Government wants to have 300,000 public charge points as a minimum in the UK by 2030. However, 75% of electric car charging is estimated to be from home.

The below table is based on data from the Digest of UK Energy Statistics (DUKES) which shows the share of electricity sources of the national grid for the years 2015 to 2021 (updated 28 July 2022). 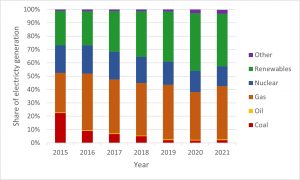 It is clear the electricity which is charging electric vehicles is not necessarily green. Volvo research for their C40 range shows if you charge a battery electric version with a global energy mix of over 200,000 km driven, emissions are only about 20% less than the petrol version. Volvo also concludes that, even when charging with fully renewable energy, an electric car only has lower overall emissions than the petrol version after driving 49,000km.

Then there is the high carbon footprint of an electric car’s lithium-ion battery production to consider. Volvo’s reports note the battery has a contribution of approximately 30% each to the total footprint of all materials and components in the C40 Recharge. Interestingly, one of the reasons for the high carbon footprint of producing lithium batteries is the source of energy used during the manufacturing process. Typically, the batteries are made in countries such as China, that even today produces 60% of its electricity from coal.

The carbon footprint of an electric car is thus inextricably linked to how green the electricity source is, not just in the use phase but during production too. It seems clear that we need to transition more quickly to renewables or low-carbon energy sources, which also may have a positive knock-on effect on today’s energy prices across Europe.

The UK is currently building offshore wind farms with the world’s largest offshore wind farm Dogger Bank currently under construction off the Northeast coast of England. In the Net Zero Strategy, the government set out that, subject to security of supply, all UK electricity will come from low carbon sources by 2035. Of course, the move to clean energy sources needs to be a worldwide effort to encompass the lithium-ion battery production carbon footprints. The UK has also placed a high importance on Gigafactories which produce batteries for electric vehicles. Forecasts suggest that the UK will host up to eight Gigafactories by 2040.

Using innovation to lower the carbon impact of the production process

A key part of greening up our energy sources and lowering the carbon impact of electric car production is innovation. Innovative ideas directed toward higher energy capture, easier installation, and more efficient transport are just a few mechanisms for improving our current and future green sources. Patents can be used to protect these innovations and claim revenue to offset the R&D investment.

In 2011, electric cars overtook consumer electronics as the biggest growth driver for Li-ion battery-related inventions measured in terms of international patent families (IPFs), each of which represents a high-value invention for which patent applications have been filed at two or more patent offices worldwide.

BASF has stated: “By 2025, with our innovations in electric car battery materials, we aim to double the driving range of midsize cars from 300 to 600 km on a single charge.” Could increasing the range of an electric vehicle on a single charge reduce the overall energy consumption?

In recognition of the importance of green innovation, the UKIPO has a green channel that speeds a patent toward grant if the invention has an environmental benefit. The UK was the first country to introduce the green channel and also further encourages innovation through tax relief incentives such as the patent box and R&D tax credits. Greater battery production in the UK has the potential to be both economically and environmentally favourable. While not yet in effect, there seem to be positive signs of China looking to implement green patent policies too.

So, are electric cars really tackling climate change? The answer seems to be an eventual yes. However, the importance of encouraging companies to innovate to reduce the global carbon footprint at all stages of the electric vehicle’s lifetime cannot be understated.