ArgonCube – Lego for the world of cryogenic neutrino detectors 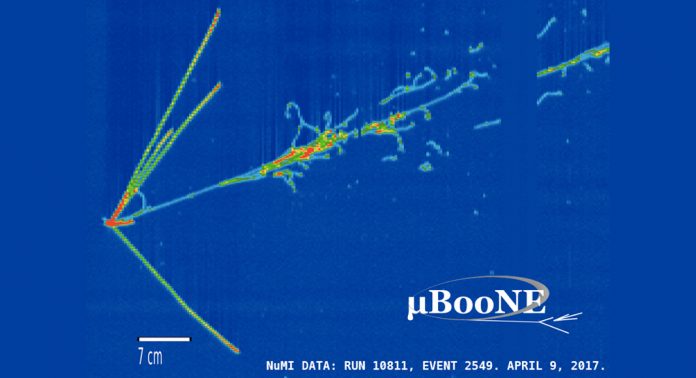 Physicists from the University of Bern have developed a novel approach to large neutrino detectors based on liquid argon.

In the zoo of elementary particles, neutrinos are somewhat special. Before a neutrino manifests itself in an interaction it may, on average, traverse more than a light year of dense material such as lead. That is where the target mass matters; that is why neutrino detectors need to be very massive; and that is why they are never too large for physicists, though they may seem quite large for the engineers who build them.

Shining an intense neutrino beam at a tank filled with hundreds or even thousands of tonnes of liquefied argon and equipped with a charge drift and readout structure gives a chance for a tiny fraction of neutrinos to produce spectacular images of their interactions with the argon nuclei. Such interaction images, after thorough analysis, are what allow physicists to solve a few of the remaining unknowns about neutrinos.

The MicroBooNE experiment, which utilises 170 tonnes of liquid argon, is about to solve the so-called ‘low energy excess’ anomaly, while the Short Baseline Neutrino (SBN) programme, with its total argon mass of 712 tonnes, is aiming at revealing the existence of a species of neutrino that is so far unknown – the sterile neutrino. The future Deep Underground Neutrino Experiment (DUNE, about 70000 tonnes) will be looking at neutrino mass hierarchy and parameters of charge and parity symmetry violation in the neutrino sector. All three experiments are based on accelerators at the Fermi National Accelerator Laboratory (FNAL) near Chicago, USA; all three experiments utilise large liquid argon detectors for neutrinos; and all three are conducted by large international collaborations with substantial contributions by physicists and institutions from Europe.

What is so special about liquid argon that makes physicists so keen to make detectors out of it?

To the largest extent, it is its nobility. Being an element from the right-most column of the Periodic Table, argon atoms have complete electron shells, and therefore don’t wish to either give an electron away, or bind any free one. This latter feature allows the ionisation electrons in the track produced by a charged particle traversing the argon medium to remain freely drifting across the argon for as long as milliseconds. In detectors, those electrons drift towards one side, whereby registering their distributions and arrival times by the electronic readout system means that physicists can reconstruct a full picture of what the interaction looked like. Such detectors are called Time Projection Chambers (TPCs). It is also important to remember here that we need mass, so the argon is condensed into a liquid to fit more of its atoms into the space we have. This is complicated by the fact that for argon to stay liquid at reasonable pressures, it must be refrigerated down to about -186°C. However, cryogenic engineers know how to deal with this.

ArgonCube is a research and development programme that was started in 2014 at the Laboratory for High Energy Physics at the University of Bern, Switzerland. Its goal is to provide experimentalists with a building block of unified design so that they can build liquid argon neutrino detectors of the mass and size they need by combining a number of such blocks just like their children playing with Lego. Since the start of the programme, the group has grown into a medium-sized international collaboration, well represented across the globe.

The modular approach of ArgonCube features a number of technical and scientific advantages. In order to force ionisation electrons to drift through the medium, an electric field strength of the order of 1 kV/cm and potentials of several hundreds of kilovolt are required. Any dielectric breakdown under such conditions produce an electromagnetic impulse capable of destroying sensitive electronics nearby.

Impurities in the argon may drastically shorten the lifetime of free ionisation electrons, rendering the whole detector inoperable. An accidental argon pollution in a single module of the detector has only limited effect on the overall detector efficiency.

Despite the fact that neutrinos interact very little with matter, in ultrahigh intensity neutrino beam experiments such as DUNE, a detector closest to the neutrino production point (Near Detector, or ND) may see quite a high rate of interactions. So high, indeed, that more than one interaction event may pile up in a single image. Splitting total volume into many isolated ones allows to suppress the probability of such undesired behaviour. With the use of a modular approach for large detectors, one may envisage a gradual increase of detector mass, or various repair-and-upgrade scenarios.

Naturally, the module container must be made as unnoticeable as possible, and is therefore constructed of materials than can be made as thin as possible and which are close to liquid argon in terms of properties relevant for the physics of particle interactions. Such a material has been identified – G10, a fiberglass laminate – and serves as the material for the module structure.

One of the novelties that the ArgonCube module features is a resistive foil deposited on its containers walls. This 50 microns-thick foil with a little electric current flowing in it allows the electric drift field in the argon volume to be shaped. Moving to such continuous potential distribution surface from previously utilised discrete structures practically excludes any single point failure and drastically improves the uniformity of the created field.

When traversing the argon medium, charged particles – along with the ionisation electrons – produce a substantial amount of scintillation light. This light carries a precious amount of information about the interaction and needs to be carefully collected and measured. A large area dielectric photon detector named ArCLight has been developed for this purpose for the ArgonCube modules.

The ArCLight is effectively a bar of special polymer coated with dielectric Bragg dichroic mirror layers on all sides except one: where the trapped photons are converted into an electric signal with silicon photomultiplier diodes (SiPMs). Its dielectric nature allows it to protrude into an area where ionisation charge drifts in the electric field without distorting it, and therefore without corrupting the integrity of the interaction image.

One more novel feature of the approach developed by our team is a robust charge readout scheme. The term ‘robust’ should be understood as having a double meaning here. On the one hand, it is based on a technology of flat and thin printed circuit boards and is robust mechanically. On the other, it is also robust in the context of the data clarity it provides: the charge spatial distribution is acquired by an array of individual charge-sensitive pixels. This has the great advantage of enabling an 3D unambiguous reconstruction representation of the interaction, compared to previously used 2D projective readout methods. The pixel plane is equipped with bespoke cryogenic charge processing ASICs developed within the ArgonCube collaboration by a team from Lawrence Berkeley National Laboratory, USA. The ASIC amplifies, digitises the data, and sends it out via a transmission line, shared between a hundred of its clones. This allows to drastically reduce the number of copper data lines needed to cross the cryostat wall from room temperature into space-cold liquid argon medium.

All individual constituents of the ArgonCube are tested separately in reduced scale and have demonstrated the expected performance. We are now entering challenging period which will see the integration and actual deployment of the detector, first as a reduced scale demonstrator and then as a full-size liquid argon component for the DUNE Near Detector.