Borders, checks and Brexit: a Gordian knot around the EU Customs Union?

Tony Smith CBE, former Head of UK Border Force and expert panellist to the UK Parliamentary Commission for Alternative Arrangements to the Irish Border, examines the future of border checks after Brexit.

According to legend, an oracle at the ancient capital of Lycia decreed that the next man to enter the city driving an ox-cart would be declared their king. A peasant farmer named Gordias was that person; and he took the throne. The ox-cart was subsequently tied to a post with an intricate knot “so tightly entangled” that it was impossible to untie it. Thereafter, another oracle declared that any man who could untie the knot was destined to become ruler of all Asia. This proved to be impossible until Alexander the Great turned up – and decided it didn’t matter how the knot was loosened; and sliced it in half with a single stroke of his sword.

Some commentators have argued that the UK’s membership of the European Union represents a ‘Gordian knot’. Ever since the UK and Ireland joined the European Economic Community on 1 January 1973 (by consent of referendum) a series of knots have been tied by EU treaties. So many, that it got to a point some 50 years later that a large number of the people decided it was time to untie the knot.

In another referendum in 2016, a majority of people in the UK voted to leave the EU. Three years later, the knot remains untied. Enter a new leader – Boris Johnson – with a new offer to untie it in order to create a looser one, which gives his people more independence. The knot that remains most stubborn is the one that ties the United Kingdom of Great Britain and Northern Ireland to the EU Customs Union. 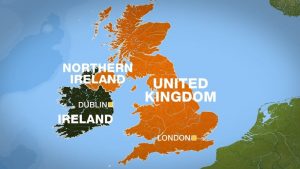 This sets up an intractable problem. Both sides agree that if the UK can only leave the EU Customs Union if three imperatives are met:

Except it wasn’t. The backstop failed to pass the UK Parliament on three occasions. Primarily because (a) it threatened the break-up of the United Kingdom of Great Britain and Northern Ireland; and (b) it tied Northern Ireland (and potentially the whole of the UK) to the EU Customs Union for an indeterminate period; potentially forever.

In a new attempt to break the deadlock, the UK has proposed ‘alternative arrangements’ for conducting border checks between the UK and Ireland after Brexit, which (a) protect the single market; (b) avoid border checks or infrastructure at or near the Irish border; and (c) avoid the backstop, thus enabling both the UK and NI to diverge from the EU Customs Union.

At the time of writing there has been no official decision from the EU; but many EU leaders are saying that the proposals are unworkable. In fact, they say that the only real solution is the backstop. Or, failing that, ongoing UK membership in the EU – or at least the EU Customs Union. A point of view shared by many UK politicians and others, who really don’t want to leave the EU at all.

Having spent the best part of 45 years working in the business of border control, I have been astonished at the number of people who have suddenly become ‘experts’ in this field. Some of them are indeed very well read and extremely intelligent; but many are coming from a position which demands that the Gordian knot is never untied. Because – put simply – it’s all too difficult.

From a technical point of view, border control after Brexit will be extremely difficult. It was never going to be easy. But it is possible. Modern day border control is all about multiple electronic transactions and intelligence led interventions. Physical inspections are increasingly rare; and no longer have to take place at the physical frontier. The UK Border Force will receive a fivefold increase in Customs Declarations after Brexit – up to 250 million a year. It is absurd to suggest these will all involve physical stops at or near a border. They won’t. Starting from a position of regulatory and fiscal alignment, Customs Declarations can be submitted electronically to both the EU and the UK authorities for customs clearance. There is no need to inspect the goods at the border itself. Indeed, the growth in global traffic and e-commerce demands an alternative approach to compliance, with physical inspections taking place in facilities and points of loading and unloading. This would be by the consent of the communities and under agreed codes of practice, as already exist in other areas such as revenue and health inspection.

There is a lot of confusion about ‘border checks’ too. We already check people and goods moving within the UK border; and between the UK and Ireland. There is a Common Travel Area for people, which means that people arriving at the airports, ports and harbours are checked by UK or Irish officers and then allowed to move freely between the islands. Livestock arriving on the island of Ireland from GB are already checked at the port of Larne, for veterinary health. People are checked on flights and ferries for security purposes. A multitude of further checks to ensure compliance takes place inland. Indeed 95% of drug seizures in England and Wales were made by police forces in communities; not by the UK Border Force at the ports. None of these checks interfere with the integrity of the EU Single Market; nor do they challenge the sovereignty of the UK or Ireland.

The UK offer to conduct more border checks after Brexit on UK-NI routes to preserve a single regulatory system on the island of Ireland is a huge step forward. This eliminates the need for any physical checks on Sanitary and Phyto-Sanitary (SPS) goods at the Irish Border. Several other initiatives – too numerous to mention here – are included in the Prosperity UK ‘Alternative Arrangements’ report.

Taken together, these ‘alternative arrangements’ can finally undo the remaining knots to Brexit and free both sides to develop a new deep and comprehensive free trade agreement outside the EU Customs Union.

Whether or not this is enough to agree a deal – or whether Boris Johnson is able to unleash his sword and cut the knot altogether – remains to be seen.

The European Commission’s Mobility and Transport department discusses the European Green Deal’s Fit for 55 package and the role that zero emission transport will...
Read more

On the road to achieving climate neutral road traffic

Researchers in Switzerland have made significant progress towards achieving climate neutral road traffic with novel study. At present, road traffic is accountable for over 30%...
Read more

Researchers from the Warwick Manufacturing Group (WMG) and the Reduced Induction Field Torque (RIFT) Technology are working to create a cost-effective and sustainable electric...
Read more