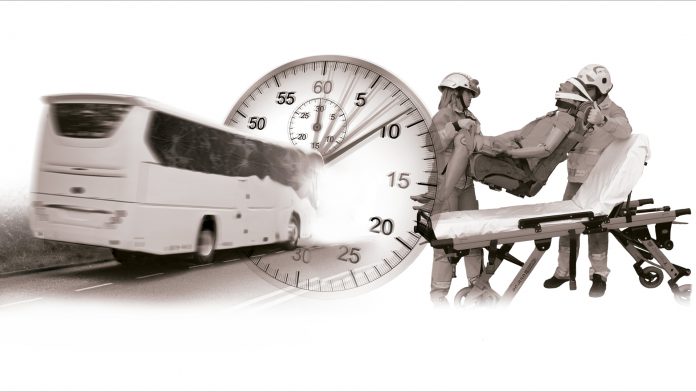 Saving time and lives during the Golden Hour is the only way to halve the current number of victims of road traffic accidents.

In the EU’s Member States, buses and coaches involved in crashes result in 30,000 severely injured passengers and 150 killed every year. These victims have given rise to roughly €7.6bn in costs for EU28 taxpayers according to the European Transport Safety Council (ETSC). The bus industry therefore needs a new solution to improve its safety levels. Standard active and passive safety devices have reached their limits; and as it is impossible to prevent all bus accidents, the bus sector needs to strengthen its safety proposal with a new type of safety system which makes rescuing the injured faster, safer and much more straightforward.

The key element in saving lives in the immediate aftermath of a bus crash is to have the specific medical equipment on site for all the injured, and enough space to work effectively: this is the only way to save time and lives during what is known as the ‘Golden Hour’.

The E-RESCUE is the first post-accident safety system which actively facilitates the rescue of victims after a bus accident and reduces the emergency services’ intervention time, thus increasing victims’ chances of survival and minimising injuries. It is the first in-vehicle system for the immobilisation and extrication of victims. The E-RESCUE bus crash rescue system can be installed in any type of bus seat by placing our device between the original seat and the base: installation in one bus can be done in only one day by three trained workers.

In the case of a crash, the E-RESCUE device makes it possible to immobilise the victims against the backrest of their seat, without moving them. The device then automatically releases the seat from the base, to be used as a stretcher to transfer victims to hospital in the safest and fastest way; at the same time, this opens up space inside the vehicle for emergency services to work better and faster. With E-RESCUE a standard bus seat becomes a ‘life saver seat’.

According to a study we conducted in collaboration with SUMMA 112, the emergency services provider for the Madrid region, during the rescue of victims from a bus crash E-RESCUE saved up to 70% of total time in the extrication of victims; taking an average of 30 minutes, by comparison with conventional techniques used by emergency response teams, which took on average two hours. E-RESCUE has the potential to reduce fatalities and severe injuries for bus passengers by more than 50% in bus accidents according to a study conducted in partnership with the Dirección General de Tráfico (DGT), the main Spanish government body responsible for road safety.

Translating these numbers into costs, the potential cost savings could reach up to €3.8bn across the EU every year if E-RESCUE were implemented on a mass scale in European buses. This is only the beginning: we are working to implement E-RESCUE technology in the seats of cars, vans and trucks. In the coming years E-RESCUE is projected to become a new standard in safety in land transport and will help drastically reduce the consequences of accidents which cannot be avoided.

The anchoring mechanism, the key component of the technology, is made of an ultra-resistant aluminium alloy and designed for its easy installation between the seat anchorage to the floor and the underside of the seat. This is the technical component that, after immobilisation of victims with the next two components, enables the released seats to be used as first stretchers by simply pulling on the red strap.

A set of immobilisation straps of three different colours (white, blue and red) is included in a piece of fabric fitted with Velcro, which can be rolled up for compact storage and simply stacked at the back of the backrest. The straps are then easily released from the fabric Velcro and can be used by the emergency services as a harness for immobilising victims along the length of the head, neck and spinal column. Clear visual instructions on how to use each strap for correct immobilisation of victims against the backrest of the seat are included in the piece of fabric that holds them.

A highly malleable cervical collar made of a light, ductile aluminium alloy using military technology, which can be stored in a minimum space, folded up and adapted to multiple sizes suitable for both adults and children simply by bending the flanges of the upper edge of the collar.

A closed compartment to hold the aforementioned straps and collar, integrated within the mechanism located underneath the seats. The compartment has a special blocking mechanism which can be opened only by the emergency services in case of need – once the components are released, and the entire system is visible and usable for its purpose.

Typically the bus industry is not concerned with this problem: if there is a crash, the rescue of the victims is the job of the rescue teams and the fire brigade. This view has fatal consequences and a high cost for society. Our vision is to introduce onboard safety systems that facilitates the rescue of crash victims. This is the new concept of ‘post-accident safety’. We do that thanks to our unique and patented solution: The E-RESCUE system. To rescue the crash victims the best solution is to use their seats to immobilise them, protecting their spine and release the seat from the structure to use it as a stretcher. Our special design introduces this solution in buses without the need to change the design of the seat or bus; so we can install the E-RESCUE system in buses already in circulation or sell the components at the start of the bus production chain.

Vehicle safety commonly focuses on active and passive safety, aiming to prevent accidents and protect the occupants of a vehicle during the crash. However, this vision is incomplete until post-accident safety is achieved.  This is essential and mandatory in other sector – boats carry lifeboats; buildings hold fire hoses ready for the fire brigade; planes have lifejackets for all their passengers; so why there is no inbuilt help for rescuing victims after a vehicle crash?

Active and passive safety are very close to their limits – it would impossible to avoid all crashes; so it is now time to worry about the rescue of the victims after crashes. It is time to introduce the E-RESCUE system to minimise the consequences of crashes that could not be avoided. E-RESCUE is the only bus crash rescue system with the potential to halve the current number of crash victims.

Benefits for society of the E-RESCUE

E-RESCUE has just won European Commission support via the EASME – SME INSTRUMENT PHASE 2 grant.  An ambitious two years project will start in June 2019 with three main goals: to make the E-RESCUE bus crash rescue system ready for the global market; to widely broadcast this new type of safety device; to teach rescue teams how to work with it.

E-RESCUE has the potential to become the game changing safety system device in the fight against road crash consequences in EU countries and worldwide by reducing by half the current number of victims and casualties. All help and support will be very welcome.