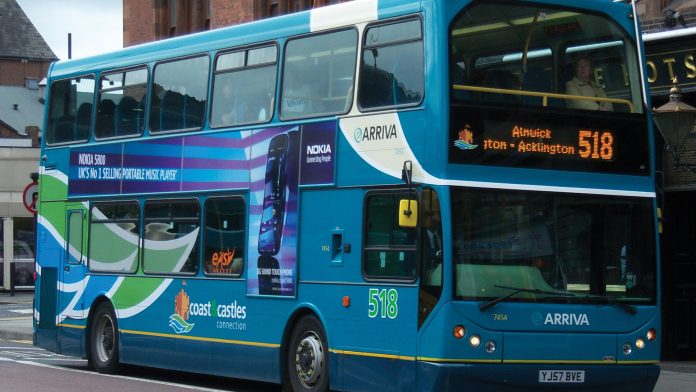 Vulcanaer is a simple, mechanical retrofit kit for urban bus and truck diesel engines to reduce idling emissions and fuel consumption, as well as reducing costs at the same time. Its technology harvests braking energy whenever a bus or truck slows down, captures the energy as compressed air, then uses it for stop-start operation and to reduce fuel usage. The Vulcanaer bus hybrid retrofit is mechanical, low-cost, fail-safe and simple to install and operate. Vulcanaer is also suitable for trucks; if it is incorporated in the design of a new engine it provides significant benefits in improving vehicle performance and reducing exhaust emissions.

In busy urban areas buses are required to turn off their engines while stopped to reduce emissions from engine idling. This is easy, but turning the engine back on is not – it requires use of the electrical starter and the battery, both of which wear out rapidly; resulting in “dead” buses and expensive replacements.

The Vulcanaer bus hybrid retrofit is able to restart the engine using its free compressed air using an air starter, saving both battery and starter motor life. Vulcanaer saves fuel too: through assisting the engine-driven compressor and by reducing the braking force on the wheels, Vulcanaer reduces the wear of braking pads and so reduces particle emissions. Retrofit takes less than a day without need to remove the engine. Vulcanaer is simple, robust enough for the reality of bus operation; and is inexpensive, costing £4000 (€4,620.85) to install and providing fleet operators with a payback of less than two years.

Over the last few years, Brunel University has contributed £2 million (€2.31 million) in development funding for road trials, both in China and in the UK with the support of public transport provider Arriva. Vulcanaer Ltd was formed in late 2017 to participate in the Advanced Propulsion Centre’s (APC) Technology Developer Accelerator Programme and was commended in the Industry Innovation category of the GreenFleet awards in November 2018.

There are currently 900,000 buses and 1.6 million trucks on Europe’s roads. Of these, the technical and politically addressable retrofit market comprises eight per cent of the fleet, or 190,000 vehicles. Vulcanaer aims to convert seven per cent of these (13,000 vehicles) to run on its bus hybrid retrofit engine over 10 years, giving a real market size of more than £50 million (€57.75 million). India and China provide further market opportunities and the long term market prospect is an Original Equipment Manufacturer (OEM) product suitable for 10,000 vehicles.

Vulcanaer will develop, manufacture and install truck and bus hybrid retrofit technology in the UK and Europe. Sales of 500 kits worth a total of £2 million (€2.31 million) are predicted by the end of year 3 and profitable by end year 4. Professional management is also being sought; along with an investment of £3.5 million (€4.04 million).

How did this product come to development?

Vulcanaer’s bus hybrid retrofit has been developed at Brunel University London over 10 years or so by world-leading diesel engine expert Professor Hua Zhao, initially through public funding for the initial research; and subsequently with partners through public and private funding for further development and application –  receiving over £2m in funding to date.

How does the system work? Is it efficient?

Vulcanaer is a regenerative hybrid engine system. It converts the bus engine into an air pump during deceleration. When the bus decelerates, the intake valve is locked open by 1mm using a hydraulic system and the air that is compressed in the compression stroke is captured within the intake manifold by our patented air valve. This enables compressed air to be collected, the engine driven compressor to do less work and use less fuel; and a stop start regime to be adopted through using the stored energy to re-start the engine. So, the system captures breaking energy. It’s very simple. It captures the braking energy as compressed air and stores this for subsequent use, including augmenting the vehicle air systems through the compressor and/or turbo-assist and/or stop/start operation. It only operates when the bus is slowing down and braking – saving up to 10 per cent of fuel in urban areas.

What technology and systems are harnessed to make the bus hybrid retrofit engine system a success?

What can Vulcanaer contribute to energy efficiency, carbon reduction and the future of transportation in cities?

Vulcanaer’s most significant impact is on emissions produced by idling, which can consume up to eight per cent of a bus’s fuel and contributes significantly to city air pollution. Currently, buses in some cities are required to turn off their engine when stopped at a bus stop or in traffic. When turning the engine off and on again must be done perhaps 300 times a day or more, the pull on the battery can result in a discharged battery. The electrical starter motor wears out easily and is expensive to replace, so it becomes costly for buses to do this all day. Vulcanaer can provide the energy as compressed air rather than as electrical energy, saving battery life; and can use an air-starter to restart the engine, saving the electrical starter motor. As a result, the bus operator can turn the engine off and on and easily save fuel without the battery and starter motors wearing out. This means residents in cities will benefit from vastly reduced idling emissions. As well as reducing emissions, Vulcanaer can also create opportunities for bus hybrid retrofit businesses to be developed around Europe.

This is a UK government-funded accelerator programme for small and medium-sized enterprises (SMEs) with new technology they want to supply into the automotive industry. It is a competitive programme, lasting for many months; and supplies relevant expertise and some funding to SMEs.

Head of Business Development and Innovation

Electric car sales reduce air pollution and mortality in the US

Growing electric car sales are helping to reduce air pollution and human mortality in the US significantly.
Read more