Catching the entatic state in photochemistry 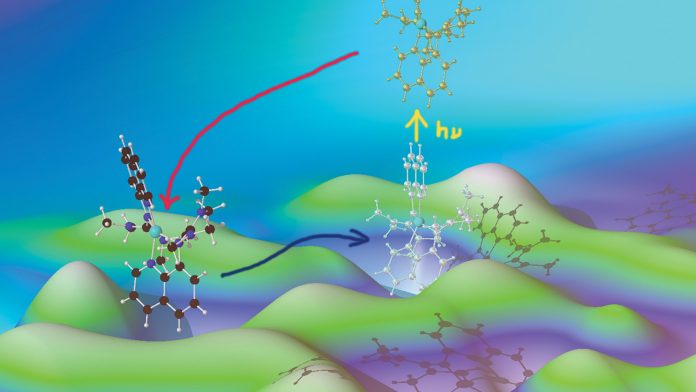 Entatic state model complexes optimise the energies of starting and final configuration to enable fast reaction rates. The Herres-Pawlis group demonstrates that the entatic state principle can be used to tune the photochemistry of copper complexes.

The Herres-Pawlis group is active in bioinorganic topics such as tyrosinase models and entatic state models. Moreover, we investigate the mechanism of robust and fast zinc guanidine complexes in lactide polymerisation and copper complexes for atom transfer radical polymerisation. As the latest result from our lab, we have transferred the entatic state principle into copper photochemistry.

The entatic state principle has been applied for 50 years to interpret thermally activated electron transfer processes at copper centres. Entasis denotes a structural pre-distortion of a transition metal complex towards a reaction transition state, thus facilitating a chemical reaction and, in a narrower sense, enabling faster electron transfer (Fig. 1). This pre-distortion is also discussed as energisation of reactive states and is crucial for efficient catalysis in chemistry and biology. Mostly, the entatic state is observed in copper or iron metalloproteins.

Biologically relevant, pre-distorted states always involve a metal atom. We examined a model system consisting of a copper complex with specially tailored ligands, so-called ‘guanidinoquinoline ligands’. Recently, we reported a series of bis(chelate), Cu(I) and Cu(II) guanidine-quinoline complex cations [CuII(TMGqu)2]2+ and [CuI(TMGqu)2]+ (see Fig. 2 for overlay of both cations). They display the astonishing feature that their structures are very similar, possessing a co-ordination polyhedron in the middle, between tetrahedral and square-planar environment.

A resonance Raman study of these Cu(I/II) complexes in solution showed that they come into resonance at nearly the same energy around ~3.5 eV by metal-to-ligand charge-transfer (MLCT) and ligand-to-metal charge-transfer (LMCT) processes. We found a dominant Cu-N vibrational mode that couples the optical charge-transfer excitation with the distortion along the reaction co-ordinate, leading from the more tetrahedral Cu(I) to a more flattened – towards square-planar co-ordination – Cu(II) geometry. The donor interplay between guanidine and quinoline units, as well as the large steric encumbrance of guanidines, were found to be crucial for this constrained co-ordination. These model compounds are extremely susceptible to MLCT and LMCT processes, as the predistortion lowers the energy barrier required to enable charge transfer.

In our most recent study, we report on the dynamics of the structural and electronic changes, as induced by an MLCT photoexcitation process, utilising a collection of complementary experimental transient techniques, which provide crucial information on timescales and cover more than four orders of magnitude. With time-resolved optical absorption and emission spectroscopy in the visible and UV range, we identify short-lived electronic intermediate states. Time-resolved IR spectroscopy characterises these intermediates by probing the molecular vibrations in the ligand system. Finally, transient pump-probe X-ray absorption spectroscopy (XAS) focuses on the changes of the Cu oxidation state and its co-ordination sphere in [CuI(TMGqu)2]+, following photoexcitation. The combination of these different experimental tools, with extensive density functional theory (DFT) studies of the excited states and their spectroscopic features, leads to a new comprehensive picture of the reaction dynamics, involving excited singlet and – by intersystem crossing – triplet states.

Using a wide range of observational methods, as well as theoretical calculations, we showed that the ligands used did indeed put the copper complex into a pre-distorted (entatic) state and were then able to observe the details of the reaction that occurred when light was absorbed. This study was only possible in an interdisciplinary collaboration with physicists, namely Michael Rübhausen from the University of Hamburg and Wolfgang Zinth from Ludwig Maximilian University of Munich, Germany.

The combination of time-dependent UV, infra-red, X-ray and visual fluorescence spectroscopy, allows a detailed picture of the dynamics of the structural changes on a timescale of pico- to nanoseconds. Our studies demonstrate that pre-distorted states are important for photochemical reactions, in other words, for certain biochemical processes which are triggered by light.

The study shows in detail how the process proceeds (Fig. 3):

All time constants are distinctly shorter, compared with other copper complexes. A complete understanding of all the processes taking place has only become possible through the unique combination of different methods of study.

The detailed analysis of the reaction principle not only improves our understanding of natural processes, it can also help to customise new bioinorganic complexes that imitate Nature, but whose range of reactions extend beyond those of natural molecules. These complexes could also accelerate, or make possible, chemical reactions associated with electron transfers in other areas, too.

The understanding of such fundamental steps will lead to environmentally benign oxidation catalysts, especially in connection with our tyrosinase model complexes which mimic the biological mild hydroxylation activity of tyrosinase. In essence, modern metalloprotein models pave the way to future sustainable catalyst systems.