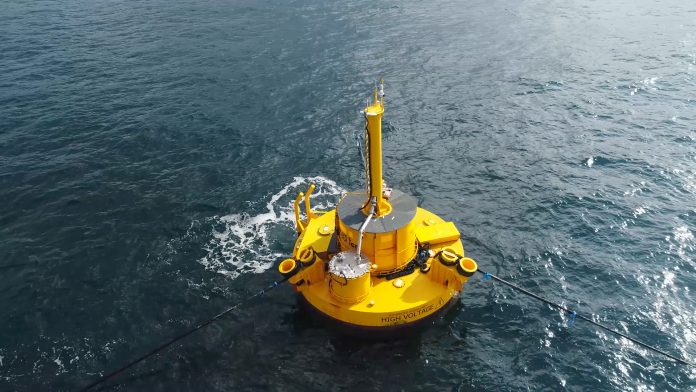 The WaveEL system from Waves4Power at the Runde site in Norway is the first of its kind. On 2 June 2017, the full-scale system was connected to the Tussa power company’s grid, and for the first time EVER power generated from ocean waves entered Norway’s electric grid.

Runde is a demo and test site and contains the essential units to build a wave power park, such as the patented WaveEL buoy and connection hub, along with the custom-designed patented dynamic marine cables which form the WaveEL system from Waves4Power.

Only the fittest will survive

Ocean waves have 820 times higher energy density compared to wind and are the biggest unharvested energy resource on the planet earth. Waves4Power’s aim is to change this!

Waves4Power is a private Swedish company seeking to generate a better future and make a major contribution to reversing climate change. The company’s business is to harvest the ocean waves of their energy and turn this into electricity – clean electricity free from harmful CO2 emissions. Can this be done? Yes; Waves4Power has already proved this at Runde. Their full-scale system has been operational in the ocean on the demanding Norwegian west coast now for 12,000 hours, of which 4,000 have been connected to the local grid, delivering electricity. It is now time for the company to scale up and make this green, clean electricity available to everyone.

Clean electricity, with no traceable footprint

Imagine large offshore wave power plants delivering CO2-free electricity to the grid, replacing electricity generated from fossil fuels. Imagine large offshore wind farms surrounded by wave power buoy clusters, all connected to the same infrastructure, delivering cheap, clean electricity to end users. Picture offshore oil platforms converted into plants where sea water is turned into hydrogen, oxygen, and fresh water, powered only by the waves. This hydrogen can be used in fuel cells for cars, trucks, boats, ships etc. It would be green hydrogen, produced without burdening the world’s freshwater resources. Both the energy and the water for the hydrogen is taken from the sea. At Waves4Power, they already have a name for it, ‘the Green Power Eco System’. The technology is available at Waves4Power and through their industrial partner network.

The WaveEL buoy is the power converter

The WaveEL buoy at Runde is eight metres in diameter on the surface, while a 35-metre-long vertical tube is located through its centre. Inside the tube is a water piston that is pushed up and down by the waves, functioning like a giant pump. The wave energy from this pump is converted into electricity. It is sent first via a specially manufactured dynamic maritime cable to the connection hub and then via a sea cable to the shore-based power grid.

The WaveEL buoy at Runde is anchored through elastic ropes with heavy concrete blocks at the sea bottom. The patented mooring system then allows the buoy free vertical movement while securing it on station. It is estimated that the new WaveEL 4.0 buoy will produce around 500,000 kWh a year. The system is designed to tackle waves up to 24 metres and is optimised for a 25-year economic lifetime. Runde was chosen as a demonstration and test site because of its abundance of strong waves, and also because it is an environmental research centre. 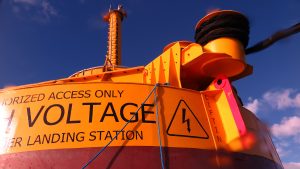 All good things come in threes

The Waves4Power wave energy concept is based on three simple but important facts: survivability, serviceability, and profitability.

Anyone who is familiar with the conditions in the open sea knows the survivability in this harsh environment is key to a successful operation. Survival of the fittest is represented by navigation and weather buoys known to live for decades (some for even a century) in the ocean. The WaveEL system is like the weather and navigation buoys – an expert on survival.

From the very beginning, the advice from the marine and dive operations partners has been to follow their number one rule: ‘build your system so it is always serviceable without the need for divers.’ With this advice in mind, the WaveEL system is designed for optimal serviceability from small boats or large service vessels alike. All systems are placed above water, and all electric connections in the system are ‘dry without need for expensive ‘Wet Mate’ connections. If marine operations at the surface are expensive, the cost is nothing compared to the cost of sub-sea operations and gear.

A strong focus on LCOE

Without a profitable system, there will be no future for wave power. The cost of building a wave power device is very dependent on the amount of raw material needed. For this reason, the parameter kWh produced per unit of weight has lately become a key factor in comparing different systems. The WaveEL buoy has one of the highest outputs per unit of weight (kWh/year/kg) in the industry.

The LCOE (levelised cost of electricity) is a critical factor for any wave power operator in becoming fully competitive with other energy sources (such as solar and wind, for example). Waves4Power has estimated that it will take approximately three years after entering full commercialisation to reach grid parity compared to land-based wind.

Waves4Power is seeking investors and partners who understand the considerable potential in this new business opportunity. This potential is not only with regard to the monetary return on investment, but also to generate a better future for all involved and to make a major contribution to the environment and to reversing the impacts of climate change.