River Cleaning proposes a new and innovative system to stop pollution from oils and other liquid pollutants in river waters. Parallel and integral to the plastic recovery system, it is designed to always allow navigability with the utmost respect for river flora and fauna.

If we consider not only plastics, but also other pollutants, such as oils, hydrocarbons and liquids of various origins, the list of the most polluted rivers in the world is much longer than the ten rivers seen previously. From the Danube in Europe to the Rio Bravo in North America; from the Salween in Asia to the Murray in Australia the list is unfortunately long.

It is not only plastics, but also oils and polluting liquids that threaten the health of the world’s aquatic ecosystems. It is with this awareness that Vanni Covolo, CEO of River Cleaning and his consolidated team, have developed a new system to tackle this problem. 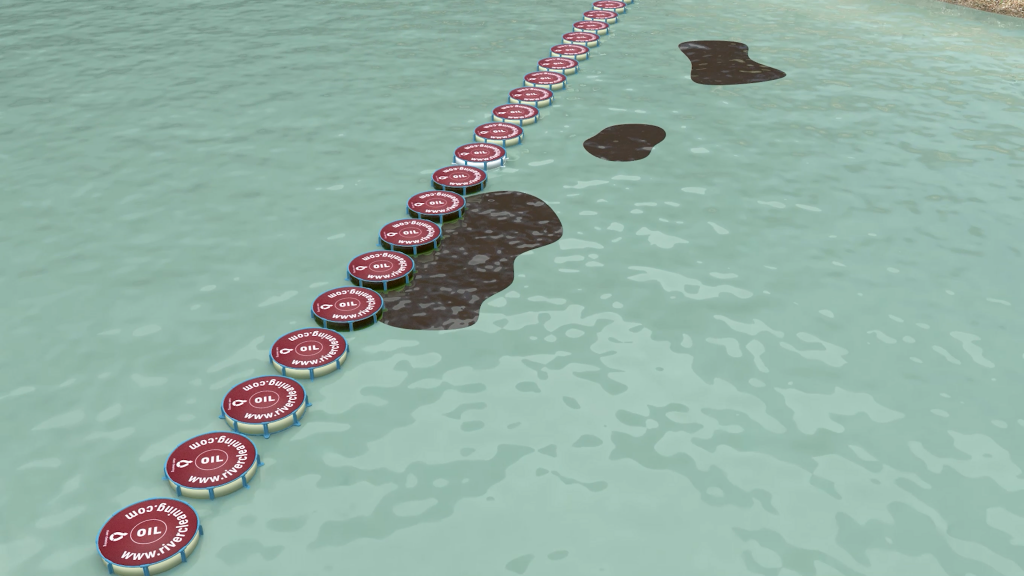 “The floating devices in series, positioned diagonally over the course of the river, can also be perfectly functional for collecting oily pollutants (at water level) and liquid pollutants spilled into the channels”, explains Vanni. “The idea of the modular barrier remains at the heart of River technology to allow navigation without hindrance, while at the same time ensuring the efficiency necessary to perform the important task of prevention and remediation”.

River Oil, like its big brother River Cleaning, has the goal of reducing pollution along the waterways as much as possible before it reaches the sea. There are many navigable rivers whose river traffic is crucial from an economic point of view, but at the same time, it is a source of ecological problems, including the release of oil.

Depending on the needs of the canal, it is possible to choose between different system options:

The simplest option consists of River modules equipped with absorbent sponges, while the most sophisticated consists of a centralised water suction and filtration system that allows large volumes of water to be regenerated, radically reducing pollution.

As with the previous project, presented on the Innovation News Network website, and within Issue 4 of The Innovation Platform, each of the floating devices is autonomous and their underwater anchorage allows the boats to move around without interfering with their course. The patented system allows each device to return to position after the passage of a boat.

The structure of the individual units has been designed so that they can be exposed to different types of boats of various sizes without suffering damage. If it is necessary, more sophisticated solutions can be provided. For example, large cargo ships passing through the Suez or Panama canals, require the devices to be withdrawn along the side channels and then repositioned immediately after the vessel has passed.

The River system, therefore, continues to be an innovative, unique and efficient project, with a low environmental impact solution, able to adapt to any waterway and any need.

The development of this project is of considerable importance, especially in regards to the Green Deal. It sees the participation of investors, institutions and large companies as an essential ally in the creation of a more sustainable and greener future.

The public is well aware of the need for a change of pace to ensure a better future for all. But we must not forget that economic and social well-being is fundamental for citizens. Governments and institutions around the world are required to take concrete action to move in this direction.

The River Cleaning team, in its continuous search for sustainable and innovative solutions to the environmental problems that surround us, is looking forward to seeing its projects implemented globally, and to being at the forefront of the fight against pollution, and the creation of a fairer and more sustainable future.