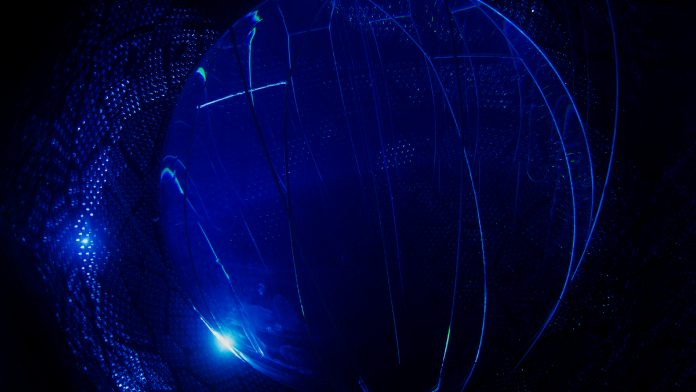 SNOLAB’s Senior Research Scientist, Christine Kraus, explains how its latest astroparticle physics experiment – SNO+ – will enrich our understanding of CP-violation and the Universe.

As scientists, we are curious about how nature works. Underground astroparticle physics goes deep into the Earth to study how particles work – how they behave, how they relate, how they evolve, and how they decay.

SNO+ is an astroparticle physics experiment conducted at SNOLAB two kilometres deep underground near Sudbury, Ontario, Canada. Although the SNO+ experiment can study a number of natural phenomena simultaneously by using its neutrino detector, its primary goal is to find out whether the neutrino is both a particle and an anti-particle at the same time. In other words, our rsesearch question is whether neutrinos are Dirac or Majorana particles.

Named after Paul Dirac, Dirac particles are familiar to us; they are particles distinct from their anti-particles, e.g. the electron and positron. The two have opposite charges, and therefore they cannot co-exist: when a low energy electron collides with a low energy positron, they annihilate each other. No mass remains – only massless photons are emitted.

One widely accepted idea among physicists is that the Big Bang created an equal amount of matter and antimatter. Since matter and antimatter annihilate each other, we should have a Universe that has only radiation and no substance. If so, how did some matter prevail to form our Universe?  How did we come into existence?

In theory, there has to be a process that tips the matter-antimatter balance so that matter exists. With our current model of particle physics, physicists postulate that a small percentage of matter stayed behind after the Big Bang because of the violation of charge conjugation parity symmetry (or CP-violation). Charge symmetry refers to a particle’s charge, and parity symmetry relates to a particle’s spatial co-ordinates. CP-symmetry suggests that the characteristics of a particle should stay the same when it changes into its antiparticle. CP-violation can take place in various ways, but none of the observable sources of CP-violation can account for all matter-antimatter asymmetry required to form the Universe. If a neutrino can flip back and forth as a particle and an antiparticle, knowing how it works will enrich our understanding of CP-violation.

Unfortunately, since neutrinos are ultra-small and mostly nonreactive, we can only measure them indirectly. At SNO+, we use a liquid organic scintillator to detect neutrinos. The scintillator is in an acrylic vessel, six metres in radius, mounted on a steel support with about 9,300 photomultiplier tubes. This whole structure floats inside a 30-metre tall cavity that is filled with ultra-pure water. Inside the acrylic vessel, we fill it with 780 tonnes of linear alkylbenzene (LAB). When struck by a particle – e.g. when hit by an electron – LAB will scintillate. Since each particle, depending on its energy level, produces different amounts of light, we can determine the characteristics of the particle by the number of photomultipliers that detect the light.

This detector is multipurpose, meaning that it can conduct various experiments by the way it works. For determining whether a neutrino is its own antiparticle, we add tellurium-130 to the scintillator. This tellurium isotope is one of the elements that emits two neutrinos and two electrons simultaneously when it decays, which is known as double β-decay. If neutrinos are Dirac, the detector should record light signals that indicate the emission of two neutrinos and two electrons. However, if neutrinos are Majorana, the amount of light excited by the electron will be stronger. In our experiment, we try to find light events that point to neutrinoless emission.

Does that sound easy? Neutrinoless emissions cause the detection of stronger light events. If we detect them, we know that the neutrino is a Majorana particle.

The major challenge is, however, background radiation: i.e. sources of radiation that we need to reduce in order to see our signals. We go underground to stay away from cosmic radiation. Yet that is not enough. We have to select all of our construction materials carefully for the least amount of radioactivity to miminise our backgrounds. The detector’s own building materials and instruments – every rope, every piece of metal, every photomultiplier tube, or even a piece of paint – can also affect its sensitivity. When it comes to the environment – the rocks, the water, etc. – we have to shield, clean, and purify everything as much as we can. That is why we fill our cavity with ultra-pure water. It is all because we are searching for the faint signals of rare events.

For various good reasons, we have chosen natural tellurium for the experiment. Nevertheless, the element still has an extremely long half-life of about 7.9×1020 years (the age of the Universe is ‘only’ 1.37×1010 years). In our first phase, we are loading four tonnes of tellurium into our 780-tonne scintillator, and we only expect a handful of events from the double β-decay. We estimate that our detector has a sensitivity of 2×1026 years, meaning that it can detect statistically significant data of as long a radioactive half-life of an element as 2×1026 years.

Our field seems to be full of contradictions. We study astrophysics, yet we go underground. We examine the smallest particles, yet our works have cosmological implications. There is always something new to discover and a new problem to solve.