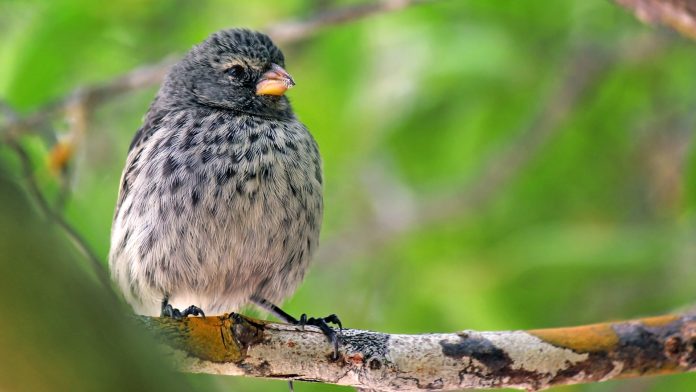 Experts from Flinders University studied Darwin’s finches on Galápagos Islands and found females that spend longer inside the nest can ward off deadly larvae of the introduced avian vampire fly.

The avian vampire fly larvae are known to enter the nests of Darwin’s finches to consume the vulnerable chicks when the parents are absent. The fly lays eggs that hatch into larvae that feed on the developing chicks, killing most chicks and causing beak deformation in the survivors. However, recent research has revealed that the female finches have evolved to ward off this threat.

“Timing is everything.” Said Flinders University Professor Sonia Kleindorfer. “The female must forgo foraging herself, and her persistence is strongly influenced by good food provisioning of her offspring by the male.”

The first few days of life for Darwin’s finches are a very vulnerable time for the newly hatched chicks, as they are born blind, helpless and unable to preen. This means they cannot call out to their mother when they sense danger and need help, which is why mum staying in the nest longer than she normally would is proving to be a life saving bought of evolution for these defenceless chicks. While older offspring have a better chance of contending with the larvae and may dislodge and consume some of them on occasion, mum’s presence is still preferable until the finch is fully grown and better prepared to protect themselves.

“The new research findings are significant because they show that ‘just being there’ can be a form of front-line defence against threats to offspring survival.” Said Kleindorfer.

Female Darwin’s finches offer care to their offspring for far longer than males, which is essential because it is their presence that wards off the parasitic larvae. However, it has been noticed that this additional care comes with a cost of the female finches becoming victims to the larvae themselves.

Monitoring the survival rate of the female Darwin’s finches is considered difficult by researchers, as females do not produce a loud advertisement song like the males do. Dr Andrew Katis from Flinders University said, “we know from long-term monitoring of Darwin’s finches, from recapture and re-sighting data since 2000, that annual survivorship in females is much lower than in males, and over 50% of male Darwin’s finches sing at the nest but don’t attract a female.”

Charles Darwin’s theory of evolution by natural selection was developed through observation of plants and animals in various environments. One of these environments was the Galápagos Islands, where in 1835 he noted the rich diversity of endemic plants, birds and reptiles.

The seventeen species of Darwin’s finches on the Galápagos Islands are an example of rapid adaptive radiation. This means that each species has a unique beak shape suited to extract resources from a different ecological niche. Since being first observed in 1997, the avian vampire fly has been parasitising nestlings and changing the beak and behaviour of Darwin’s finches.

Scientists discovered that female Darwin’s finches that can sustain longer parental care to chicks, with less feeding opportunity for themselves, paired with males that increase feeding to the offspring, have better chances to produce offspring in a vampire fly-dominated environment.

“Control measures are urgently needed to save Darwin’s finches from extinction,” scientists discovered from their research. They found only 10.4% of the critically endangered Medium Tree Finch nests produced young on Floreana Island, and the rest were killed by either predators or the parasites.

The existence of one-pole magnets: Fact or fiction?

A collaborative team of researchers have investigated magnetic monopoles and utilised cosmic rays and particle accelerators to determine the existence of one-pole magnets. What is...
Read more