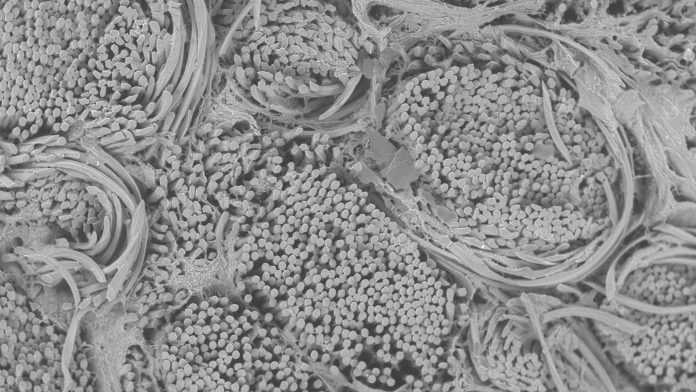 Véronique Migonney, discusses some of her latest research projects, including the elusive world of bioactive and biodegradable synthetic ligaments.

Véronique Migonney is a professor who focuses on biomaterials science. In particular, the field of bioactive polymers synthesis and grafting to functionalise biomaterials surfaces with the aim of controlling the host response. We spoke to Migonney about some of her latest research studies; from developing bioactive and biodegradable synthetic ligaments, to the last development of bioactive scaffolds to assess their potential to guide gene transfers.

What is the importance of developing bioactive and biodegradable synthetic ligaments? What role does raw materials with appropriate physicochemical characteristics and long-term degradation features play in this, and why is it essential?

The anterior cruciate ligament (ACL) rupture is one of the most common sport injuries affecting top athletes in football, golf and in a more extended way, skiing. Due to ACL’s poor healing capacity, surgical intervention is often required. ACL ruptures are managed by using ‘ligamentoplasty’ (autograft replacement). Today, it is the ‘gold standard’. Nevertheless, deleterious effects of weakening the knee joint are observed in more than 50% of the cases; it leads to full pain, sometimes bone necrosis at the anchorage point and the time to recover is long (varying from six to 12 months).

To propose innovative solutions, 30 years ago artificial ligaments were developed. It was a real disaster illustrated by very high rates of ruptures, inflammation and synovitis difficult to resorb (presence of debris impossible to take off as in the case of carbon fibers ligaments).

All these events were predictable for different reasons but mainly because of the incorrect choice of the polymers and/or materials used to elaborate the ligament prothesis as well as their totally un-appropriate mechanical properties. Consequently, orthopedic surgeons were terribly affected by those first implantations and were rapidly, and for a long time, opposed to the implantation of artificial ligaments. To overcome this disaster, LARS company proposed and patented (1997) a new structure of artificial ligament made of poly (ethylene terephtalate) (PET) mimicking the natural ligament fibers structure in the intra-articular part of the prosthesis. To improve the biological response of PET ligament, I started working with LARS company in 2000 by modifying PET surface with a selected bioactive polymer: poly (sodium styrene sulfonate) (polyNaSS) (Biomacromolecules 2006, 2007, two patents).

In vitro experiments and in vivo preclinical clinical studies on sheep (Biomaterials 2013, Arthroscopy 2013, IRBM 2011) achieved in the frame of ‘LIGART project’ funded by French National Agency for Research and further clinical study on dogs carried out by Pr Viateau France, demonstrated the great interest of such bioactive grafting which allow the perfect control the host response : bioactive PET ligament is bio-integrated in the surrounded tissues displaying the same role as in the natural tissues. Despite the great interest of such artificial ligament, orthopedic surgeons as well as patients are still waiting for a novel solution preventing the permanent presence of the artificial prosthesis considered as a foreign body. Then, with the background on the proved bioactivity of PET ligament surfaces, I started developing and proposed to industrial companies (LARS and TEXINOV) and an academic partner (Pr Viateau) the project of elaboration and assess of a new ligament prothesis which could be bioactive and bio-integrable but also biodegradable.

Indeed, the last decade in biomaterials science led to the expansion of tissue engineering in different medical applications focusing on the development of biodegradable structures that could allow graft functioning while enhancing the host integration. In case of ligament, the main challenge was to develop a bio-integrated and biodegradable structure that gradually loses its mechanical properties when at the same time a new ligament grows, acts as a natural ligament and gains in solidity.

Mechanical behavior and reconstruction of natural tissue are the two key points for such a successful device. One article published in Plos One (2018) evaluated the mechanical consistency of poly(ε-caprolactone) fibers grafted with the bioactive polyNaSS, as a candidate for ligament prosthesis.

In order to be medically used, PCL fibers need to cope with multiple steps before implantation – including spin finish removal, extensive washings, knitting, radical polyNaSS grafting and sterilisation processes. The evolution of the mechanical properties at each step of the elaboration process has been investigated. Results showed that PCL fibers presented the same visco-elastic behavior than the native ACL.

Nevertheless, when undergoing physical treatments such as ionising radiations, such as UV or β-rays for the sterilisation, the material endures a hardening, increasing its stiffness but also its fragility. This effect is counterbalanced by the thermal polyNaSS radical grafting which acts like an annealing step, increasing the elasticity of the PCL fibers: the stiffness is decreased, leading to higher energy dissipation. Added to that changes in the structure of the material, this extended study demonstrated the possibility of PCL polymer to modulate its microstructure. In the case of orthopedic ligament prosthesis, the need of such a construct is strongly required to avoid distension of the future prosthesis and to restore good knee stabilisation.

The LIGA2BIO project is funded by BPI France and involves LARS, TEXINOV and UP13 to propose the LIGA2BIO PCL prosthesis as the promising ligament prosthesis of the future.

Can you tell us about your recent research project: “Analysis of early cellular responses of anterior cruciate ligament fibroblasts seeded on different molecular weight polycaprolactone films functionalised by a bioactive poly (sodium styrene sulfonate) polymer”. What did this project achieve?

The article you mentioned is the one following Plos One 2018. The challenge described above was focused on the mechanical properties of the biodegradable PCL bioactive ligament. Another important property which is claimed is the bioactivity and bio-integration of such biodegradable PCL structures. For that, we followed the fibroblast cell response towards biodegraded bioactive and non-bioactive PCL surfaces.

What are scaffold-guided gene transfers? What do they have to offer, especially when it comes to targeting bone marrow?

The study on gene and scaffold guided gene transfer is a collaboration project of basic research started for several years with a German team of the University of Saarland specialised in orthopedy and arthrosis of the knee joint (H Madry) and in gene therapy (M Cucchiarini). We are working on the interest of the bioactive biodegradable PCL surface as a scaffold able to guide gene transfer in the presence of bone marrow cells. Recent results are published in Tissue Engineering Part A 2019 giving ideas for further developments. In the case of ligaments prostheses, it would be interesting to compare the effect of bioactivity and that of guided gene therapy.

To expand on scaffolds, can you tell us about fiber scaffolds and your research on “Electrospun Poly(ε-caprolactone) Fiber Scaffolds Functionalised by the Covalent Grafting of a Bioactive Polymer: Surface Characterisation and Influence on in Vitro Biological Response”

This research started almost ten years ago (collaboration with C Vaquette) and it was a starting point on possibility of improving the cell response of biodegradable polyesters such as PCL by grafting polyNaSS yet demonstrated to favorise biointegration.

For more than ten years research works on electro-spun scaffolds are widely developed and we wanted to bring the bioactivity to these scaffolds. The applications of such structures are not yet well targeted but can be used in all the tissue engineering approaches needing regeneration: dental, cardiovascular, cartilage, ligament, spina bifidae etc. The main obstacle is that the electrospinning process is not easy to industrially develop.

What is the process for grafting bioactive polymers onto metallic materials, and why is this importance?

This is a very interesting question. As we developed the bioactive polymer grafting on PET, we had the idea to propose the grafting on titanium and alloys surfaces to elaborate bioactive joint prostheses: it was a terribly great challenge to graft a polymer on a metallic surface. We did it, patented it in 2005 and licensed it to CERAVER company.

At the same time, as we had previously shown (Biomacromolecules 2002) that the bioactive polyNaSS polymer exhibited inhibition properties towards bacterial adhesion, we started a collaborative work funded by the French National Agency ANR to propose a bioactive grafting named ACTISURF on joint implants able to improve osteointegration while preventing bacterial adhesion and then joint implant infection: in vitro and in vivo experiments demonstrated the ability of ACTISURF to be osteointegrated.