After discussions at the International Commission on Radiological Protection (ICRP), this risk has been defined in the national laws of each country. The risk assessment based on the Hiroshima and Nagasaki studies only considered external exposure to gamma rays and neutrons, not internal exposure. Internal exposure, especially from beta, gamma, and X-rays emitted by radioactive microparticles and their associated Auger electrons, has not been considered. On the other hand, people who entered the city immediately after the bombings of Hiroshima and Nagasaki (‘early-entrants’) were exposed to less than a few mGy of external radiation and the impact on their health was assumed to be negligible, but statistically significantly higher mortality rates have been observed as a result of cohort studies. In addition, in Semipalatinsk, the former nuclear test site of the Soviet Union, it has been reported that residents were exposed to radioactive dust and gas passing through the residential area, causing health problems.

As a common exposure factor in these similar exposures in Hiroshima and Nagasaki as well as other parts of the world, we focused on radioactive dust particles. Particles smaller than 2.5 microns in size, also known as PM2.5, adhere to the alveoli and cause bleeding and inflammation when the alveolar cells are exposed. Unlike external exposure, most of the dose from internal exposure is absorbed by the body, causing more serious health problems. This is because the radiation dose rate increases inversely proportional to the square of the distance in the vicinity of radioactive microparticles. Some of this effect has been observed in our series of animal experiments. Calculations have shown that the dose rate can exceed several tens of Gy in the vicinity of the microparticles. 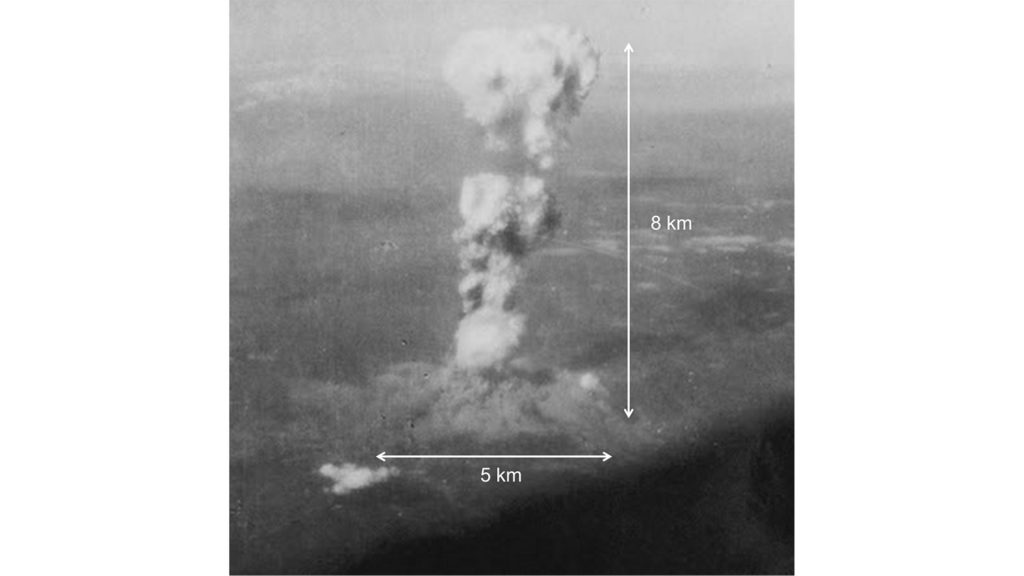 Background of the experimental plan

The risk analyses for people exposed to radiation in Hiroshima and Nagasaki have been conducted mainly at the Radiation Effects Research Foundation in Hiroshima. So far, any previous research has failed to notice one important phenomenon.

Fig. 1 is a photograph of the mushroom cloud over Hiroshima, showing the thick dust covering the ground surface. At that time, the area around the hypocentre in Hiroshima was densely populated with Japanese houses, but all of them collapsed within a radius of 2km from the hypocentre due to the bombing. The walls and roofs of these collapsed Japanese houses were made of a large amount of clay, and the shock wave and blast of the explosion sent a large amount of dust up into the air from the clay and the soil on the ground surface. There are many testimonies from people who were exposed to the bombing that for a while after the explosion, the area was completely dark (due to the high density of dust) and they could not see anything.

In this photo, the spread of the dust mass on the ground surface is about 5km in diameter. And some of the components in this dust (soil dust) were activated by neutrons from the atomic bomb. The representative radionuclides are Al-28, Mn-56, and Na-24, which were produced from Al-27, Mn-55, and Na-23, which are part of the main constituents of the soil. Mn-56 and Na-24 are shown in the Dosimetry System 1986 (DS86) to be 250 mSv and 430 mSv, respectively, when the exposure doses are integrated immediately after the end of the explosion at the hypocentre. This far exceeds the radiation protection standard of 1 mSv per year for the general public. It is also much higher than the 20 mSv per year limit for radiation workers and the evacuation zone in Chernobyl and Fukushima. This radioactive dust is thought to have been taken into the body through adhesion to the body or breathing. However, studies conducted by the Radiation Effects Research Foundation (RERF) and other organisations over the years have not covered the health effects of this radioactive dust, or radioactive microparticles.

Furthermore, in Semipalatinsk, where the former Soviet nuclear test site in Kazakhstan was located, clouds (plumes) containing radioactive particulates passed through the villages, exposing people to radiation, especially during atmospheric nuclear tests. Cohort studies of radiation effects are still ongoing here, but in one of the villages, Kainar, exposed people are known to have complained of ill health after exposure, which is specifically named as Kainar syndrome. These are said to include loss of energy and stamina and intense fatigue. The same thing happened in Hiroshima and Nagasaki, where people were said to have ‘atomic bomb Bura-Bura disease’, a condition in which they felt so tired that they could not work and did nothing. A similar thing has also been said about the health problems observed in American soldiers who served in the Gulf War.

In common, the calculated external doses from gamma radiation were uniformly low everywhere, at most less than about 10 mGy, and have not been considered to be caused by radiation exposure. In Hiroshima, hair loss was observed in persons exposed at 2km, where exposure doses were low. Hair loss is said to occur only at doses of about 2,000 mSv, but to date, no scientific explanation has been given for these symptoms.

As shown in Table 1, Otani et al. (Nagasaki Med. J. 87, 261-264, 2012) studied early entrants to the city of Hiroshima and found that the risk of death increased for those who entered the city from outside on 6 August, 7 August, and 8 August, compared with entrants who entered the city after 9 August. It is noteworthy that there was a significant increase in risk among males over 20 years of age, which can be explained by the fact that these men, who were mainly physically strong, spent a lot of time in the contaminated area searching for and rescuing family members and acquaintances.

The common cause for all of these is the possible health effects of exposure to radioactive microparticles, which was not known until now. Therefore, we thought that not only epidemiological studies but also animal experiments were necessary. The most frequently exposed nuclides are Mn-56 (half-life 2.6h) and Na-24 (half-life 15h), but we decided to focus on Mn-56 with a half-life of 2.6h in view of the high mortality risk specifically observed in the first day entrants. 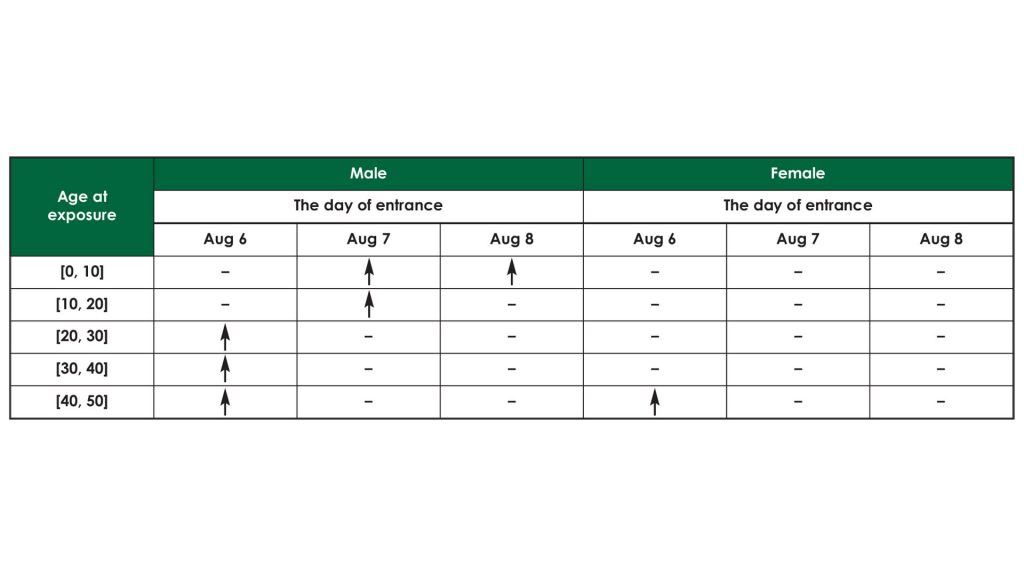 In the experiments, powders of manganese dioxide a few micrometres in size were activated by thermal neutrons from a nuclear reactor, and the powder was sprayed on rats and mice for an hour. After the irradiation, the internal radiation dose, pathological changes, changes in locomotion, and differences in gene expression in each organ were followed for two months. Although the study is still in progress, some notable changes were observed in the pathology of the lungs. Although the estimated internal exposure of the lung was only 100 mGy by the conventional method without taking into account the effect of particulates, emphysema and haemorrhage were observed (Shichijo et al. Radiat. Env. Biophys. 56, 55-61, 2017).

It was also found that there are specific differences in gene expression among radioactive microparticles, although this is not discussed here.

The results of our animal studies have shown that there are specific effects of radioactive microparticles. One of the most notable results is that the health effects of exposure to radioactive microparticles can be more than 20 times greater than those of external exposure. However, the mechanisms underlying these findings are still unclear at present. It is hoped that more research will be conducted in the future. If the mechanism can be elucidated, it is expected to lead to the development of treatment and protection methods.