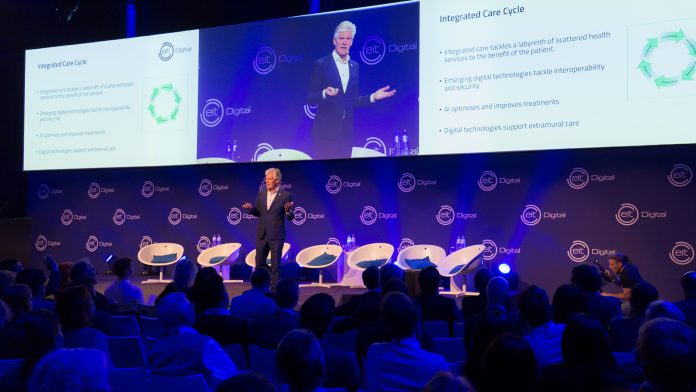 Ahead of EIT Digital’s ten-year anniversary, Innovation News Network’s international editor, Clifford Holt, speaks with the organisation’s CEO, Willem Jonker, about how they are helping to build a ‘strong digital Europe’.

As an innovation community, you are a strong advocate for gathering ‘makers and shapers’ in a global conversation. How are you approaching that? What successes have you seen thus far?

The importance of a strong digital Europe is widely acknowledged and best achieved by makers (industry) and shapers (authorities) working together to create a sovereign European digital reality with products, services and regulation that serve citizens, respect European values, drive innovation and provide equal opportunity for everyone.

In addition to businesses, EIT Digital also brings players from the education and research sectors into our community as well as, increasingly, those representing public authorities, particularly in the domain of digital cities. We also participate in the policy debates, and there is a general consensus that more of this is needed.

It is important that we take a different approach to that we see in the US, where for instance, representatives from or owners of tech companies are obliged to take part in ‘hearings’ to explain some of their activities. In many ways, these hearings seem more like a trial or a confrontation than a dialogue, and that is something that Europe should avoid.

It is clear that business and policy need one another. This is particularly visible at the moment as a result of the COVID-19 pandemic: we need a vaccine for the virus, which must be developed quickly and safely by industry; but the right policy conditions need to be there to not only enable that to happen, but also for that vaccine to be accessed by the public once it is available. It is a similar case for digital technology – the business and policy spheres need one another. Simultaneously, of course, they also have different roles to play. The role of the government is to create an equal playing field, while in many instances big tech companies will be striving for a very strong if not dominant market position, and so their objectives can often seemingly be at odds with one another. 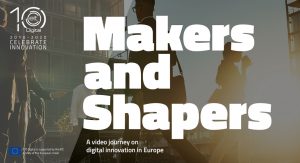 A strong digital Europe needs to be built, because there are some quite significant issues to be found in certain areas, and they need to be addressed. To achieve this, the Makers and the Shapers need to move together.

To take Tesla as an example: Tesla became such a valuable company because it has been highly influenced by policy; the government supported early development; the government supported the business with a loan; and there are now numerous regulations that make driving electric cars attractive for both groups. This demonstrates how policy and business goes hand-in-hand. It wouldn’t make sense to develop policies that benefit the electric cars if nobody was building them; while on the other hand any company that decides to begin to build a relatively new product like an electric car is going to experience higher costs at the beginning, and so without governmental support it is unlikely that anyone will begin to operate in that space.

When it comes to the digital domain, it is not yet properly understood how that relationship will really work. It is perhaps possible to look at what is happening in the transitions being experienced in other domains such as energy – not in the sense of making an energy company digital, but in the sense of moving from the current physical network platform and data dominant marketplace, to a more inclusive, equal playing field, and what does that mean in terms of digital?

Those debates are emerging, and in the coming years we will (hopefully) see a clear focus on defining what ‘sovereignty’ actually means, what it means in different industries, what technologies it refers to, what is public and what is private, and, of course, what regulations are going to support it.

What are the main concerns when it comes to Europe implementing an innovation policy? Does the fact that Europe now has an ‘innovation’ rather than a ‘science’ Commissioner help?

For me, science is just as important as innovation. Science is, of course, the source of new knowledge, while innovation is taking that knowledge and making it work in society (either in an economic way, or in a more general way to address societal needs). Science and innovation thus complement each other, and if you do not create new knowledge through science, then after a while, innovation will also stop because there is nothing new to feed it with.

The scientific research base in Europe is strong, but we definitely need to step up when it comes to innovation – though not at the cost of reducing our research efforts. It is therefore a little alarming to see what is coming out of the EU negotiations on the next MFF (Multi Annual Financial Framework), where there is a sense that it is still very difficult to step up innovation investments, which are necessary to achieving the sought-after transformation. These negotiations are making it clear that there is a remaining difficulty in achieving a consensus on how to gradually transform significant parts of the economy into new domains when it requires a lot of innovation. For me, one solution to this is not simply to tell people that they are using a dated method or technology and that they need to change, but to show them what digital means for their organisation.

In this sense, there is a clear need for an enhanced investment into digital skills. Indeed, COVID-19 is going to result in many sectors shrinking both during and after the pandemic, meaning that many people may find themselves out of work with little or no prospects of regaining employment in the same field. Meanwhile, before the pandemic the digital sector was suffering from both a skills and a workforce shortage. As such, there is perhaps a way that COVID-19 can be used as an accelerator for the digital sector by retraining and re-skilling those whose jobs are impacted by the virus so that they can join the digital sector. The demand for this is already there. 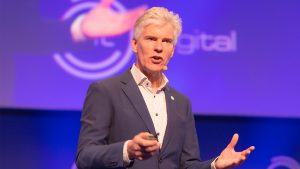 You recently signed a Letter of Intent with three other KICs and the European Innovation Council (EIC). What is this designed to achieve?

Within the innovation pillar of Horizon Europe, the most dominant instruments are the EIC (European Innovation Council) and the EIT (European Institute of Technology), which both work to strengthen Europe’s innovation power. Those two organisations should really work hand in hand.

In specific domains, the KICs are building trusted innovation communities where they focus on innovation, and which they fuel with talent and education. The EIC is really focused on mobilising capital and making sure we have venture creation and growth and scaling them through the accelerator.

EIT Digital works predominantly in what I refer to as the ‘stand-up’ and ‘start-up’ and ‘scale-up’ phases, and in both the scale-up and start-up phases, the EIT and the EIC can complement each other. This was recognised very early on when the concept of the EIC first came to be developed, and it was also immediately agreed that there should be a good level of collaboration between the two instruments.

That is why I am extremely happy that the most mature KICs at this point – the first wave of KICs, which are focused on digital, energy, and climate – have now signed a letter of intent. A pilot to explore this collaboration is already running, which will enable all parties to identify which areas require the level of collaboration to be expanded and how that can be achieved. We intend to flesh that out in the coming months as we continue to explore how we can translate the letter of intent into concrete and structured collaborative actions.

The letter of intent is also timely, given that Horizon Europe will be launched at the beginning of next year, and while we could have perhaps waited for the Framework Programme to get underway so that the vision and role of the EIC is a little clearer, we all believe that there is no time to lose, and we want to ensure that we are ready right from the start of Horizon Europe.

Again, there is a sense that COVID-19 is acting as an accelerator, because during the pandemic the EIT and the EIC were the only instruments that were able to mobilise a significant amount of money to support entrepreneurs in Europe who were able to innovate and meet urgent societal needs. The two entities will thus, through their flexibility, be able to perhaps introduce new dynamics into the innovation pillar, whilst also potentially injecting additional agility into Horizon Europe’s instruments. 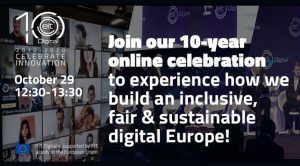 As EIT Digital celebrates its  ten-year anniversary, what will take place at the celebration event? How will you bring together the voices from the public and private sectors? And how has the COVID-19 pandemic impacted on how this has been approached?

EIT Digital’s anniversary celebrations will look both backwards – at our history and successes as we have grown from just 30 members to 300 – and forwards – at the successes we know we will go on to achieve. The main event will address the key stakeholders in Europe’s innovation ecosystem – those from the knowledge institutes, from industry, and, of course, from public authorities.

Looking to the future, we will clearly show our focus for the next decade, which includes how to make Europe’s digital sovereignty concrete, identifying which key technologies should be invested in, and defining our position – and so asking whether we need to control, or co-develop, or simply have access?

It would have been great to be able to host a physical event to celebrate our anniversary – and we had planned to invite over 1,000 participants to the celebrations in Brussels. But, unfortunately, COVID-19 prevents us from doing so. As such, we will hold virtual event on 29 October (which is free of charge and open to anyone) where we will link up with high-profile industry and policy representatives from around Europe.

When mixed with air, hydrogen becomes explosive, making it essential to sense hydrogen leaks as quickly as possible.
Read more

The Help to Grow: Digital software scheme eligibility has been expanded to businesses with at least one employee, meaning 1.2 million businesses could benefit. A...
Read more

Willem Jonker, CEO of EIT Digital, discusses the increasing threat of cybersecurity breaches in Europe and what businesses can do to protect their systems...
Read more