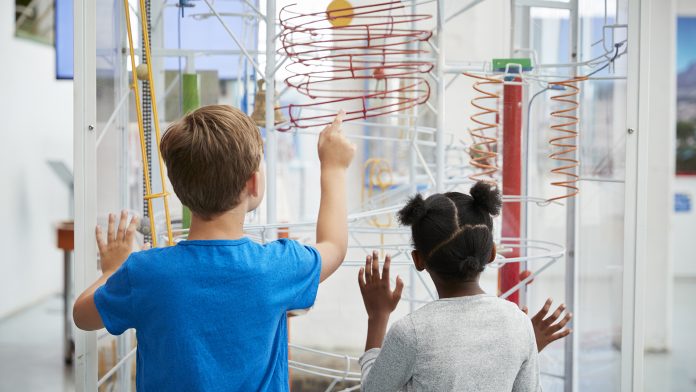 Hands-on and interactive exhibits are staples of science and children’s museums around the world. The exhibits invite children to explore scientific concepts in fun and engaging ways. However, researchers at Carnegie Mellon University’s (CMU) Human-Computer Interaction Institute (HCII) are asking whether children actually learn from these exhibits.

Ideally, museum staff, parents or caregivers are on hand to help guide children through museum exhibits and facilitate learning, but that is not always possible. As a result, the research team from CMU has demonstrated a more successful way to support learning and increase engagement. To do this they designed novel Artificial Intelligence (AI) technology in museum exhibits that includes a virtual assistant to interact with visitors.

When the researchers compared their intelligent exhibit to a traditional one, they observed that the intelligent exhibit increased child learning and the average time they spent at the exhibit. “Having Artificial Intelligence and computer vision turned the play into learning,” explained Nesra Yannier, HCII Faculty Member and Head of the project, who termed the results ‘purposeful play’.

Earthquake tables are popular exhibits, where typically children can build towers and then watch them tumble on a shaking table. Signs around the exhibit attempt to engage kids into thinking about science as they play, but it is not clear how well these work or how often they are read.

Yannier led a team of researchers that constructed an AI-enhanced earthquake table, outfitted with a camera, touchscreen, large display and an intelligent agent, NoRilla, that replaced the signs. NoRilla — a virtual gorilla — interacts with participants, taking them through different challenges and asking questions about why towers did or didn’t fall along the way, thus helping them make scientific discoveries.

The researchers — including Yannier, Ken Koedinger and Scott Hudson from CMU; Kevin Crowley of the University of Pittsburgh; and Youngwook Do of the Georgia Institute of Technology — tested their intelligent earthquake exhibit at the Carnegie Science Center in Pittsburgh.

Children attending a summer camp, ages 5 to 11 interacted with either the intelligent or traditional exhibit and completed pre- and post-tests, as well as surveys to gauge what they learned and how much they enjoyed their experiment. Researchers also observed visitors interacting with the exhibit during regular hours.

The pre- and post-tests and surveys revealed that children learned significantly more from the exhibits that utilised AI, compared to the traditional exhibit; they also had just as much fun. A surprising result was that even though children were doing more building in the traditional exhibit, their building skills did not improve at all, as they mostly engaged in random tweaking rather than understanding the underlying concepts. The AI-enhanced exhibit not only enhanced children’s understanding of the scientific concepts being described, but also transferred to better building and engineering skills as well.

Their experiment at the Science Centre also indicated that people spent about six minutes at the intelligent exhibit, four times the 90-second average of the traditional one.

“What’s particularly impressive to me is how the system engages kids in doing real scientific experimentation and thinking,” commented Koedinger, a Professor in HCII. “The kids not only get it, they also have more fun than with usual exhibits even though more thinking is required.”

Parents of children who experienced the exhibit said it was more interactive, directed, and instructional, offering two-way communication compared to other exhibits. They also noted that “it employs inquiry learning, which is the heart of how kids learn, but is also a play model, so it does not seem like a learning activity.”

“Our exhibit automated the guidance and support that make hands-on physical experimentation a valuable learning experience,” Yannier added. “In museums, parents may not have the relevant knowledge to help their children, and staff may not always be available. Using AI and computer vision, we can offer this experience to more children of different backgrounds and at a wider scale.”

The future of AI technology in museum exhibits

The team’s research began at the Children’s Museum of Pittsburgh, where they tested the design of their intelligent exhibit and made improvements based on feedback from people who interacted with it.

“This research will have lasting implications for future exhibit experiences at the Science Center,” stated Jason Brown, the Henry Buhl Jr. Director of the Carnegie Science Center. “Creating hands-on fun and inspirational exhibit experiences that scaffold science, technology, engineering or mathematics learning and discovery is what positions us as one of the most unique museums in the region.”

The research team recently published its findings in the Journal of the Learning Sciences. The intelligent science exhibit remains at the Carnegie Science Center as a long-term exhibit. It is also at the Children’s Museum of Atlanta and is intended be constructed at the Please Touch Museum in Philadelphia as well as the Children’s Discovery Museum of San Jose in California.

The CMU team is already working on designing other intelligent science exhibits using computer vision and AI to teach different scientific topics. Yannier emphasised that this technology will not only enhance lessons in a museum, but could also assist students learning in the classroom or at home.