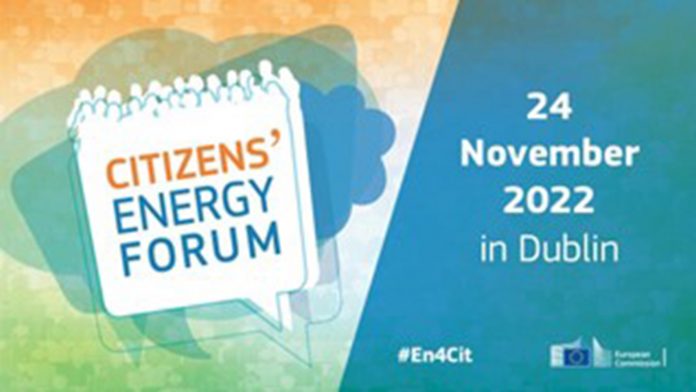 Mariano Votta of Cittadinanzattiva/Active Citizenship Network and Filippos Anagnostopoulos from the Institute for European Energy and Climate Policy (IEECP) discuss how the Citizens Energy Forum is aiming to mitigate consumer energy consumption among EU citizens.

Spanning from environmentally conscious to indifferent energy consumers, EU citizens can be identified with six different profiles according to energy-saving behaviours and attitudes, according to the latest research stemming from the EU-funded NUDGE project. Understanding behaviour is a starting point to structure consumer engagement that can motivate practical ways to reduce energy consumption. This key message is highlighted on the occasion of the 14th Citizens Energy Forum and titled “Energy consumers at the heart of the energy crisis.”

About the Citizens Energy Forum

The Citizens Energy Forum, organised by the EU Commission Directorate-General for Justice and Consumers, takes place in Dublin, Ireland, on 24 November 2022 and will engage citizens’ interest groups, a wide range of stakeholders, including NGOs, businesses, as well as policymakers (ministries and regulators) on energy consumer issues in the context of the current energy crisis. Energy is an essential good, and the war in Ukraine and related rising energy prices are hitting wide sections of the population across Europe.

How the NUDGE project is understanding consumers’ behaviours

The six profiles are the main output of a European-wide survey distributed in the past months across Europe in 15 languages and completed by 3129 citizens from 29 countries as part of the European Horizon 2020 funded project called “NUDging consumers towards enerGy Efficiency through behavioural science” (NUDGE), which aims is to analyse the behaviour of European citizens with concern to energy consumption and consequently design and test nudging interventions on different segments of the population. More information on this work can be found in the report: Profiling of energy consumers: psychological and contextual factors of energy behaviour

Despite the difficulties encountered when seeking to divide consumers into groups according to their behaviour, the survey revealed six profiles of energy consumers: 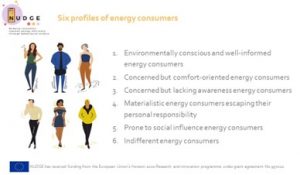 The data collected have permitted us to explore the predictability of energy consumers’ intentions to reduce energy consumption and to understand to which degree people perceive that they can conserve energy and how their peers influence their energy attitudes. For instance, the survey revealed that closing the windows when heating frequently occurs, with 87.2% stating often/always and that turning down the lights is the most common saving behaviour, with 91.5% indicating that they often/always perform this action.

Furthermore, the psychological data collected allowed us to group the respondents into clusters of energy consumers with distinct characteristics that facilitate the selection of (nudging type) behavioural interventions for them.

For instance, to explore their interest in more detailed information about household energy consumption, people were asked to what extent they were interested in getting more insights into how they consume energy. People are generally most interested in real-time energy usage, with six out of ten indicating a lot or even great interest. In contrast, people tend to be neutral towards data revealing their daily occupancy of the property and its activity (the second and third largest categories).

In other words, the specific survey results suggest that even if European citizens are ready to play their part in the current energy crisis, more immediate and adequate public and private interventions are required.

How to end Europe’s dependency on Russian gas imports

A team of US researchers has pioneered a new model they believe can eliminate Europe's dependency on Russian gas imports.
Read more