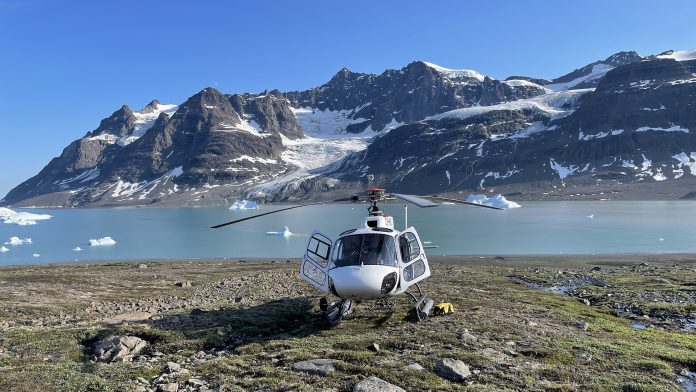 The metals-rich nation of Greenland is the focus of Conico Limited’s (ASX: CNJ) activities, with an experienced team advancing two projects on the underexplored East coast to discover Greenland battery metals.

There are few locations you can travel where you can state with confidence that you are the first person to have stepped foot there, as is the case in parts of our Ryberg Project area. This is the allure of Greenland, and why it is the focus of our search for in-demand Greenland battery metals required for the decarbonisation of the world’s economy. Greenland has also attracted companies including Anglo American and investors such as the EXIM Bank.

Whilst other destinations are known metal-rich provinces, most are mature jurisdictions where the potential to find new world-class deposits is under significant pressure. Conversely, many underexplored destinations are just that for a reason, mostly due to security or legislative concerns. Greenland is in the ‘Goldilocks zone’ of existing discoveries, with large swathes of underexplored ground, and progressive legislation in a European jurisdiction.

Our objective is simple: to make world-class metal discoveries. We acknowledge that, due to the lack of infrastructure on Greenland´s East coast, any discovery must be world-class in size to warrant the necessary infrastructure that will be required. We believe that our licence areas have that potential, and our shareholders´ support will be rewarded with the appreciation in their investment when that potential is fully realised.

Our technical personnel consists of geologists and operational staff who have extensive experience, both in Greenland and internationally. By conducting our activities in-house, we retain knowledge whilst also having absolute dedication to reaching our objectives – something that using consultants would not allow. Our in-house operational team allows us to be nimble in the field, and significantly reduce costs compared to using logistical contractors.

Working to discover Greenland battery metals is a privilege and with that comes the responsibility to ensure we maintain the highest environment, social, and governance (ESG) standards. Greenland has stringent controls in place that all companies must follow, and, in addition, we are an Australian company and adhere to Australian best practice guidelines.

Conico has two projects on Greenland´s East coast referred to as Ryberg and Mestersvig. They contain known occurrences of the battery metals copper, nickel, and cobalt, the base metals zinc and lead, and the precious metals gold and palladium. They cover a combined surface area of almost 6,000 square kilometres and are on the coastline facing Europe.

The large licence areas are integral to our process for making new metal discoveries, starting big and identifying targets to zero in on. Both Ryberg and Mestersvig contain known metal occurrences where follow-up work is typified. Last year’s activity at Ryberg utilised a combination of aerial survey work using modern geophysical instrumentation, satellite data, and ground truthing leading to the identification of multiple new targets.

These targets at Ryberg, in conjunction with existing targets at Mestersvig, will be assessed for the first time in 2022.

This is frontier exploration in its purest form. Prior to our arrival, there had been expeditions by foot and boat that identified metals at the surface, and we are now expanding on this by using modern exploration techniques. Multiple new targets have been identified that will be tested for the first time in 2022.

Conico is the first mover at Ryberg and we have exclusive rights over 4,521km2 containing known nickel, copper, cobalt, palladium, and gold occurrences. The project is on the Atlantic coastline and is the closest point to Iceland, only 365km away. We stage all of our activities out of Reykjavik, the capital of Iceland, due to its proximity and transportation links (both sea and air). Iceland also presents possibilities for future metal processing due to its abundance of green energy.

The Ryberg Project is situated in one of the most geodynamic locations in Earth’s history, where the surface pulled itself apart to form the (North) Atlantic Ocean, and is in the migration path of a volcanic hotspot that is now located beneath Iceland. The result is the creation of the North Atlantic Igneous Province, the name given to an event that released a volume of lava that is roughly equivalent in size to 2.5 billion pyramids of Giza. On its way to the surface, some of this volcanic material intruded sedimentary rocks that acted as a source of additional metals and sulphur, with this enrichment ultimately creating magmatic sulphides that contain the metals of interest.

What makes the Ryberg Project area special is that the plumbing system (dykes and sills) to the volcanic activity and their host sedimentary rocks are exposed at surface. This is due to the erosion of up to seven vertical kilometres of basalt, revealing the rocks of interest at depth.

Metal targets within the Ryberg Project are all prospective for magmatic sulphides, with the most advanced being the Miki and Sortekap Prospects. These were first identified visually with magmatic sulphides occurring at the surface and sampled using a hammer. The samples were then sent to a laboratory where mostly copper-dominant magmatic sulphides (accompanied by palladium and gold) were present at Miki, and nickel magmatic sulphides (with cobalt) at Sortekap.

The services of Dr David Holwell, a specialist in magmatic sulphide mineralisation at the University of Leicester, were engaged to determine the composition of the sulphides and geological setting. This work ultimately led to scientific publications in renowned journals, the development of an exploration model, and an increase in the Ryberg Project area to cover all prospective locations with potential for magmatic sulphides. Conico has since had a continuing association with the University of Leicester and has been using geophysical techniques such as electromagnetics, magnetic and induced polarisation, in conjunction with satellite multispectral and imagery data to delineate specific targets of interest to be drill tested.

Drilling occurred at both the Miki and Sortekap Prospects in 2021, targeting anomalies identified in geophysical surveys that could represent magmatic sulphides at depth. At Sortekap, three drill-holes were completed, and minor nickel magmatic sulphides were intersected, whilst at Miki, nine drill-holes into electromagnetic geophysical targets proved to be sulphides unrelated to the magmatic sulphides seen at surface. Whilst not making an immediate large discovery is frustrating, a wealth of information has been obtained and will make for an exciting drill programme this year.

The game-changing achievement of 2021 was obtaining the first ever regional magnetic survey over the Ryberg Project area, with higher resolution data acquired over the Miki and Sortekap Prospects locating potential targets. The data was delivered at the completion of the 2021 field season and will be utilised for drill targeting this year, providing significant new insights. In addition to aiding exploration at Miki and Sortekap, the regional magnetic survey identified three new areas of interest, none of which have been previously identified. These are referred to as the Quest, Qiterpiaaneq, and Pyramid Prospects and will be the subject of intensive assessment this year, as will the Cascata Prospect that was discovered last year.

The licence area contains the historic Blyklippen zinc and lead mine, the only mine to ever have operated on the East coast of Greenland. The mine operated year-round in the period 1956-1962, closing due to the prevailing low metal prices at the time. The associated infrastructure remains on site, including the mine camp and harbour.

The vein that hosts zinc and lead at Blyklippen remains open laterally and at depth, with the objective being to gauge the volume and grade of what remains. Located along strike and 13km to the South is the Sortebjerg Prospect that is a vein akin to that at Blyklippen, but also contains copper. The 13km between the two occurrences remains untested and is to be the focus of 2022 drilling activities. To guide drilling, the company has acquired magnetic and gravity geophysical data, and high-resolution satellite data that shows the surface expression of the vein.

Additional targets include the Nuldal Prospect, identified in 2020, which is a vein system parallel to Blyklippen-Sortebjerg that contains significant quantities of lead-copper-silver. Then there is Oksedal, where previous exploration activities located copper-lead-zinc.

Activities to discover Greenland battery metals at Ryberg are to commence in May this year, with three drill rigs on site and the associated logistical planning in place. All prospects within the Ryberg Project area will be assessed before personnel and equipment transfer to Mestersvig, where drilling will continue until the end of the field season in late September. Both projects have internet access and regular updates will be provided.

For additional information on our projects, please look at our ASX announcements which are available on our website www.conico.com.au, or additionally contact us directly at mailroom@conico.com.au.

We are a metal exploration company headquartered in Perth and listed on the Australian Securities Exchange (ASX), under the ticker CNJ. For European investors our shares are tradable on the Frankfurt Stock Exchange using the ticker BDD.