Heavy ion physics and its applications

Professor Dr Ivan Kisel from the FIAS Frankfurt Institute for Advanced Studies, uses the analogy of throwing pebbles into a pond and observing their ripples to explain how heavy ion physics is approached – and, indeed, how this approach is also useful elsewhere.

“Throwing pebbles into the water, look at the ripples they form on the surface. Otherwise this activity will be an empty amusement.” Kozma Prutkov (11.04.1803 – 13.01.1863). Following this wise saying, let us imagine ourselves standing by the sea on one of the beautiful pebble beaches that many countries of our blue planet Earth can boast. From somewhere in the depths of myself, from my childhood, there is a desire to take a bigger pebble and throw it far into the water, watching for a long time the ripples expanding across the water in all directions. And another pebble flies into the water.

Observing the ripples expanding across the water

So that our relaxation is not a simple amusement, we will mentally trace the trajectory of the pebble’s flight from the moment it takes off to the moment it hits the surface of the water. It is clear that the shape of the ripples will depend on the angle at which the pebble went underwater. It is also clear that the amplitude of the ripple crest will depend on the force with which the pebble hit the water, i.e. its speed. By performing a small series of such experiments, we can draw up a table of the dependencies of the various ripple characteristics on the properties of the pebble and its trajectory. This is simple and can even be enjoyable in an unusual way.

With this type of table, we can already solve an inverse problem: by observing and registering the characteristics of a ripple, we can determine the entire trajectory of the pebble, taking into account the law of gravity, using the measurements recorded in the table. And knowing the entire trajectory of the pebble and my height, I can determine the point on the reconstructed trajectory where the pebble has detached from my palm. Of course, we are going to need a slightly more complex calculation here, but if we have a laptop or iPad with us, it looks quite simple; doesn’t it?

Now that we have a solution to such a simple problem, we will make it a little more complicated. Namely, we will take not one pebble, but a whole handful of them and throw them into the water. So, now we have not one pebble, but several dozens, or even a hundred pebbles in one throw. The task becomes more complicated, but only technically, nothing fundamentally new arises. We will only need to observe the waves more carefully, which will overlap, interfere with one another, i.e. we will need some kind of an imaginary detector in the form of a fishing net floating on the water surface. The nodes of this network detector will be equipped with readout electronics, the signals from which will be transmitted directly to our computer via cables. In this way, by automating our task, we will be able to obtain solutions in real time, i.e. immediately after throwing a handful of pebbles, we will know the trajectories of all these tens and hundreds of pebbles, as well as at what point they flew out of my hand, i.e. their initial position in my palm. And if we add the physical parameters of my figure (height, arm length, etc.), we can determine exactly where and how all these pebbles were located on the surface of the pebble beach on which we are standing, i.e. in this way we will study the properties of the pebbles themselves. 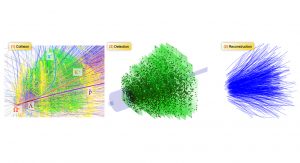 Searching for the trajectories of elementary particles

This is how the basic properties of matter are studied in experimental heavy-ion physics. Only instead of a pebble, we take a heavy nucleus, such as lead or gold, place it in an accelerator, accelerate it to near-light-speed, direct it to a target, and in the detector we observe particles that were formed during the collision of the nucleus with the target. Like the ripples, we detect the intersection points of the produced particles with hundreds and thousands of sensitive areas of the experimental detector system. Millions of such measurements are fed to a high-performance computer cluster after each collision, where the trajectories of hundreds or even thousands of particles that have crossed the detector and left their own measurements are calculated in real time.

The most interesting properties of matter formed under extreme conditions of heavy-ion collisions are often found in the properties of short-lived particles, i.e. particles which were produced by the collision and almost immediately decayed into other, daughter particles. Such short-lived mother particles often do not even have enough time to fly to the detection system, so they have to be found along the trajectories of their daughter particles, which makes an already difficult task extremely challenging.

As we can see, the basis for the success of this most sophisticated chain of tasks is finding particle trajectories, namely determining which measurements were taken by the same passing particle. Since this task is inherently a combinatorial one, it is the most time-consuming step of the data processing chain. To solve this extremely complicated combinatorial problem, we use the cellular automaton method.

The idea of the cellular automaton method comes from biology, where biological media cells interact locally only with their nearest neighbours. This approach has proved to be ideal for our task, as it perfectly combines the discreteness of detector measurements with the local memory structure in modern computers. In addition, as biological cells interact independently with each other, this opens up a rich opportunity for parallel computing on many-core computer architectures, both central processing units (CPUs) and graphics cards (GPUs).

The use of the cellular automaton has enabled us not only to solve the highly complex combinatorial tasks of finding trajectories, but also to speed up the most time-consuming phase of data processing by several thousand times.

To determine the parameters of the found particle trajectories, we use the Kalman filter method. This method has been used since the first manned flight to the Moon. And just as the trajectory of the Apollo-8 spacecraft was calculated, we also calculate the trajectories of elementary particles. Only we, with all due respect to the mathematicians of the last century, are doing this much faster.

And to estimate the properties of matter during a collision, such as the properties of the formed quark-gluon plasma, analytical mathematics is no longer sufficient, and we use an artificial neural network to solve this most complex quantum mechanical problem.

We will have to use all of this long chain of sophisticated algorithms in the future CBM experiment to reconstruct up to 10 millions collisions of relativistic gold nuclei per second at the FAIR accelerator facility in Darmstadt, which will require a huge high-performance Green Cube computer cluster with more than 100,000 computing cores working in parallel and synchronously with the FAIR accelerator. Such an extremely interesting and challenging task awaits us in the year 2025.

Find what others do not find

Science always needs to solve tasks that previously could not be solved. Even a small step forward can bring with it a new, previously unknown and extremely complex task. Experimental heavy-ion physics is particularly rich in examples of such tasks. To solve them, we have to involve not only precise methods of higher mathematics, but also implement them as effectively as possible on the most modern many-core computer architectures.

Are the approaches we have developed limited to the physics of heavy ions? Of course not. The cellular automaton can be successfully used in a wide range of applications where pattern recognition is required, be it to find microscopic objects in molecular biology or to recognise human faces in observation cameras. The task of following the trajectories using the Kalman filter arises, for example, when monitoring the trajectories of any flying targets in real time. And artificial neural networks can make predictions in complex financial markets.

In this way, numerical methods for solving problems that arise when studying the properties of matter under extreme conditions can be successfully applied in other fields of science and industry.