How can Angola’s abundance of critical minerals benefit the UK?

Last month’s groundbreaking ceremony for the Pensana processing plant at Saltend, near Hull in the north of England, marked a significant stage of the UK’s critical minerals journey. The event was attended by the UK’s Secretary of State for Business, Kwasi Kwarteng, and was well documented as the launch of the long-awaited UK Critical Minerals Strategy. However, the repercussions of this work will be felt far from the banks of the Humber.

In the centre of Angola sits the Province of Huambo, and within it, the town of Longonjo. Once part of a chain of agricultural hubs connected to the coast by the Benguela Railway, Longonjo is now home to Pensana’s rare earths mine, which has begun construction this year and is at the heart of Angola’s plans for economic diversification.

The objective of the Critical Minerals Strategy is to make the UK a world-leading processor of critical minerals, utilising its capacity for innovation and education to establish new global supply chains, and to work in collaboration with international partners for mutual benefit. For a country like Angola, this offers a fantastic opportunity.

An introduction to Angola

For many people, the mention of Angola will conjure up historical images of civil war, corruption scandals, and oil. However, the country is changing. While oil production still dominates the country’s economy, and 95% of its exports, the economic shock of the COVID-19 pandemic highlighted Angola’s need to diversify, and the vulnerability of being dependent on one resource.

In landmass, Angola is twice the size of France, and, with a young and growing population, it holds significant potential in other sectors which have been underutilised in recent decades. Since President João Lourenço came to power in 2017, his government has promoted the image of a new Angola by fighting against corruption, easing the process of doing business, and encouraging foreign investment into the country.

This work is beginning to bear fruit, and for British businesses in particular, the country’s mining sector is emerging as one of the world’s most appealing frontier markets.

On 22 March 2022, a charter train travelled from Pensana’s site at Longonjo along the Benguela Railway, to the port of Lobito on Angola’s Atlantic coast. On board the train were the members of the UK’s first ever mining trade mission, organised in collaboration with the British Embassy in Luanda and the UK Department for International Trade, which included representatives from ten companies. Among them were representatives of mining giants Anglo-American and Rio Tinto, along with UK supply chain firms, financial and legal groups, and both the British and Norwegian Ambassadors to Angola.

For international visitors, this trip illustrated the infrastructure that Angola already has in place to support the mining sector. The Benguela Railway was rehabilitated in the early 2010s and runs from the port to Luau on Angola’s eastern border with the Democratic Republic of the Congo (DRC).

The deep-water port of Lobito has a newly constructed minerals terminal in place, which is waiting to be utilised. The vision is that, should the railway line be connected to neighbouring networks in the DRC and Zambia, then Lobito will become a major minerals hub for Central and Southern Africa. In the near future, however, the vision is that Pensana will be able to transport their rare earth products with relative ease from the mine at Longonjo to the processing plant at Saltend.

For the Angolan audience, this visit highlighted the growing presence of British companies that are entering the Angolan market. While Longonjo may be one of the advanced projects in the market, other companies are following, buoyed by improved regulation and better data on the geological potential of the country.

While the diamond sector has long been established in northeast Angola, the wider mineral potential has been historically underexplored. Over the past decade, the Government of Angola has undertaken a national geological survey, known as PLANAGEO. The result of the study indicates a wide range of potential deposits, including gold, lithium, and nickel. The confidence of international investors has been further encouraged by the creation of the National Mining Agency, led by Mr Jacinto Rocha, which has been viewed as a significant improvement on its predecessor organisation, and which is supporting international investors in navigating the complexities of the market.

Following the visits to Huambo and Benguela, the trade mission concluded with a one-day conference in Luanda, where Mr Rocha was present alongside the keynote speaker, Diamantino Azevedo, the Angolan Minister for Mineral Resources, Petroleum and Gas, who has been at the forefront of Angola’s mining progress since being appointed in October 2017. 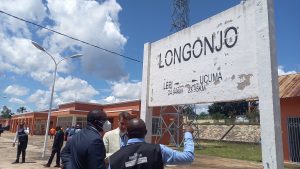 Turning back to Pensana’s project in Longonjo, the company are forecasting that, once operational, the site will supply the Saltend refinery with approximately 40,000 tonnes of mixed rare earth sulphates (MRES) per annum for 20 years. The deposit represents one of the world’s largest undeveloped rare earth deposits and comprises a weathered carbonite outcropping at the surface. The weathered material will be mined from the surface and treated through a combination of floatation and hydrometallurgical circuits to produce a high-grade MRES.

The Saltend refinery is targeting production of 12,500 tonnes per annum of separated rare earths, including 4,500 to 5,000 tonnes of neodymium and praseodymium (NdPr) oxides, representing around 5% of the projected world demand in 2025. The sector is expected to see increasing levels of demand due to the growth of the electric vehicle (EV) and wind power sectors.

The recent Adamas Intelligence Rare Earth Market Outlook to 2035 predicts: “With total magnet rare earth oxide demand forecasted to increase at a CAGR of 8.3% and prices projected to increase at CAGRs of 3.2% to 3.7% over the same period, Adamas Intelligence forecasts that the value of global magnet rare earth oxide consumption will triple by 2035, from $15.1bn forecast for 2022 to $46.2bn by 2035.”

Initially, the company plans to sell 50% of its Saltend product directly to an Asian magnet manufacturer, while they remain in talks with major automotive original equipment manufacturers in Europe and the US for potential offtake agreements further down the line.

For the Angolan Government, the Longonjo project represents a significant step towards diversification, and demonstrates an increasing openness to international and private investment. The commitment to the project is clear, with Angola’s Sovereign Wealth Fund now one of Pensana’s biggest investors to date.

While Angola remains a challenging place in which to do business, the past five years have seen a considerable period of transformation for the Southern African nation.

Although there is still much work to be done, the government’s efforts to counter corruption and bolster the business environment have begun to bear fruit, and Pensana is at the forefront of the companies who can make a real contribution to the process of economic diversification for the country.

Challenges will still lie ahead, particularly with training up a labour force to work in a new sector, however, Angola’s success in oil and gas production since independence shows that this is certainly possible. With a young and growing population, the appetite for new opportunities like this will be strong.

Undoubtedly, the Longonjo and Saltend projects hold strategic importance to both the UK Critical Minerals Strategy and Angola’s economic diversification. Furthermore, the two sites are the first steps in developing the world’s first independent and sustainable rare earths supply chain and may play a significant role in the global economy in the years to come.