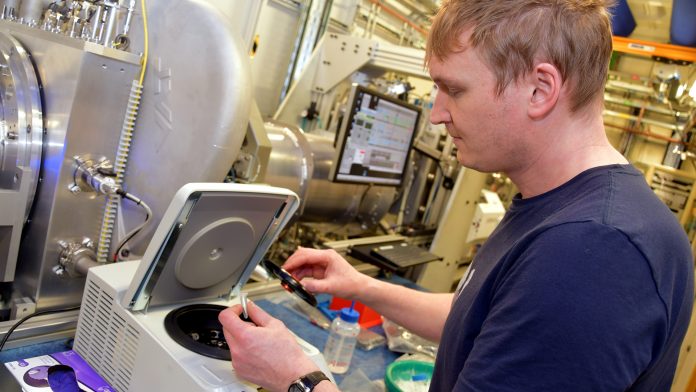 The 9,000th publication to come from the Diamond Light Source, the UK’s national synchrotron, has been published, describing how hybrid nanocapsules from renewable materials can help cut carbon emissions.

A recently published paper in Chemical Engineering Journal by a team of researchers from Aalto University in Finland is the 9,000th to be published, as a result of innovative research at Diamond Light Source, the UK’s national synchrotron. Called ‘Lignin-fatty acid hybrid nanocapsules for scalable thermal energy storage in phase-change materials’, the paper explains how the team have developed a scalable and straightforward technique for turning lignin from renewable biomass into hybrid nanocapsules that show great promise as phase change materials (PCMs). Their results represent an important step towards the sustainable expansion of PCMs in thermal energy storage applications. This is a key technology to reduce our greenhouse gas emissions and mitigate climate change.

Principal beamline scientist at Diamond, Nathan Cowieson outlines: “Given 11 of the 12 warmest years in Europe have occurred since 2000, we know that failure to tackle climate change will threaten human well-being, ecosystems, and economies.  So, with 27% of global energy consumption occurring in the residential sector, and demand growing (particularly in developing countries), it is becoming increasingly important to develop methods for harvesting and storing thermal energy. One of the most promising options is based on phase-change materials (PCMs) that absorb or release large amounts of heat when they change state, e.g. from solid to liquid and vice versa. PCMs act, in effect, like rechargeable batteries, but storing thermal energy rather than electrical energy.”

One of the most significant potential applications for PCMs is the heating and cooling of buildings as it could eventually replace energy intensive air conditioning units that increase carbon emissions.  PCMs incorporated into building materials could remove excess heat during the day and release it at night, with minimum carbon emissions. Thermal energy storage (TES) can also help bridge the gap between peak energy demand and the fluctuating supply from renewable sources. However, the development of affordable TES is hampered by a reliance on fossil hydrocarbons, synthetic polymers and a lack of environmentally benign and scalable PCMs.

Professors Monika Österberg and Mika Sipponen from the Aalto University Team explained: “Dynamic systems require stable PCM suspension, and one approach to maintain PCM stability is nanoconfinement in core-shell structures. Our team have been exploring simple, low-cost, and scalable colloidal synthesis methods to produce hybrid nanomaterials from renewable resources. We were inspired by recent work into the encapsulation of organic molecules in lignin microparticles and nanoparticles, and decided to investigate the use of lignin as a component of nanoconfined PCMs.

Lignin is a class of complex organic polymers that occur as structural materials (particularly in wood and bark) in many plants. Lignin is widely available as it is a by-product of processing wood into paper but is not currently used as PCM for thermal energy storage applications.

Cowieson added: “This was a really fun experiment to do, the samples were a bit out of the ordinary for us and gave a really pretty scattering signal. Importantly, the insights gained from the SAXS analysis and porosity measurements improve understanding of the formation mechanism and packing patterns of various lignin morphologies.”

Dr Paavo Penttilä from the University team, added: “The SAXS experiments allowed us to see the structure of the particles in their native state, that is, in the aqueous solution and without drying. In this way, we could ensure that what we saw in the electron microscopy images was indeed the real structure of the samples.”

The researchers investigated whether the nanocapsules had potential for use in PCMs for thermal energy storage. Their results showed that their water-accessible shells allowed the nanocapsules to overcome the poor thermal conductivity of lignin. They were also able to extract the hybrid capsules to obtain highly porous capsules containing only lignin.

Director of Physical Science at Diamond Light Source, Laurent Chapon concluded: “Diamond’s 9,000th publication exemplifies the links between fundamental research, applied science and the technologies that move humanity forwards. Discovery may be an everyday occurrence here at Diamond, but it never loses its shine.”