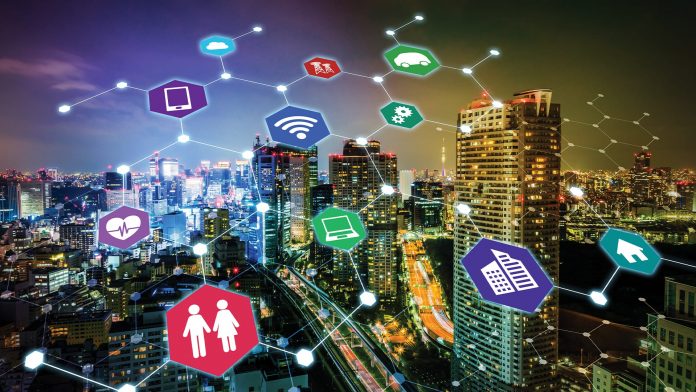 Todd Thibodeaux, president and chief executive at CompTIA, talks on the importance of the technology of IoT in smart cities.

Today, many facets of cities – from transportation and water management, to building design and public safety – are viewed as ripe for reinvention. Inexpensive computing, sensors and data storage, coupled with reasonably fast wireless connectivity and a large base of tech-savvy users provide the foundational ingredients for digitising our cities. This emerging future is commonly referred to as the Internet of Things (IoT) era, an expansive umbrella that covers many concepts, including IoT in smart cities.

Smart city initiatives will attract technology investments of more than $81 billion (~€71 billion) globally in 2018, and spending is set to grow to $158 billion in 2022, according to the new release of the International Data Corporation (IDC) Worldwide Semi-annual Smart Cities Spending Guide. The spending guide provides a detailed look at the technology investments associated with a range of IoT in smart cities priorities, programmes; and use cases.

International Data Corp (IDC) forecasts that global investments in smart city initiatives will attract technology investments of more than $81 billion globally in 2018; growing to $158 billion by 2022. Three use cases – fixed visual surveillance, advanced public transit and smart outdoor lighting – will attract nearly one-quarter of global spending on IoT in smart cities this year, according to IDC.

Digital transformation in communities is an ongoing process, but many cities and municipalities with a good grasp of technology have successfully migrated to a digital-first mentality over the last two decades.

However, becoming a smart community requires a broader approach. Making the leap from digital to smart requires advances on many fronts. It is much more than deploying a new mobile app and a few sensors. Rather, it typically requires a re-thinking of everything from IT architecture and broadband infrastructure, to workflows, user experience, staff training and more. Smart cities must be built on smart foundations. The implementation of IoT in smart cities is that foundation.

CompTIA has identified an IoT ecosystem framework, comprised of four dimensions or sub-components, that brings some clarity and manageability to IoT in smart cities concepts. The four dimensions of the framework are:

As it pertains to IoT in smart cities, this may include end points such as street lights or parking meters, as well as embedded sensors which could be placed in almost anything.

Software sits at the heart of any smart city deployment. This may entail the code used to control devices; the platforms for aggregating and managing data; and the mobile apps for real-time interaction. Cloud-based software-as-a-service will have a prominent role in implementing IoT in smart cities, but there will be a need for customised software development to connect legacy management systems through APIs.

While large, well-funded cities may have extensive internal technical expertise capable of managing IoT in smart cities systems, most communities will need the assistance of outside experts. This may occur at the initial planning and deployment stages via a technology solutions provider, or via an ongoing relationship with a managed services provider for day-to-day support for maintenance, security and troubleshooting.

For products to connect to the Internet, to one another, and to carrier networks, it requires common standards. The process of setting standards for IoT in smart cities applications is well underway. Organisations such as the Open Connectivity Foundation, Thread, Industrial Internet Consortium, Wireless Broadband Alliance, and others are working to develop standards to govern the many interactions between hardware, software and services.

At a minimum, city officials, IT staff and elected officials will need a basic understanding of this framework and its interdependencies. Without sufficient investments in staff training and workflow optimisation, technology investments rarely reach their full potential. The same will be true for IoT in smart cities. With the many complexities and interdependencies of these initiatives, it will be imperative to get the people and process elements right.

Realistically though, decisions regarding whether to invest or how to proceed with smart city initiatives will be contingent on outputs rather than inputs. Smart city investments will be judged by metrics such as improvements to liveability, costs savings, business community support, and votes at the ballot box. However, we are at a time when many cities are experiencing population growth while resources remain essentially flat, improvements in efficiency and productivity will be critically important to governments and their constituents.

As the use of IoT in smart cities moves from concept to reality, questions surrounding the government’s role become more pressing. Headlined about hijacked cars, zombie refrigerators, hacked power plants, and other scenarios will put governments, citizens and businesses to the test. The rapid pace of innovation often eclipses the best efforts of regulatory bodies and policy makers to get out in front of these issues.

Given the many elements of IoT in smart cities, new regulations are especially prone to the law of unforeseen and unintended consequences. Striking a balance between regulatory clarity and new rulemaking will be a challenge, especially in the following areas:

With the projected growth of connected devices and corresponding increase in potential vulnerabilities, especially in new domains such as critical infrastructure, the security component of IoT in smart cities provokes a number of thorny questions. Could government leaders and elected officials face liability for security negligence? Could support and service firms be held responsible for security incidents?

Most users of technology are not fully aware of the extent to which their personal data is collected, bought, sold, and used by various parties. In a hyper-connected smart cities world, the depth and breadth of data privacy concerns will greatly exceed those of today. Issues of opt in versus opt out, right to be forgotten, data breach notification, data ownership, video or drone surveillance, facial recognition, customer privacy bill of rights and cross-border legalities will be of particular interest.

The intersection of commerce and IoT in smart cities has not received as much attention as other higher profile issues, such as security. But there are a number of policy questions in this arena that require attention. Consider the issue of data ownership. Do households own the detailed usage data from water, gas and electric meters? Or do the utility companies own it? What are the rules that govern third party access to this data through APIs?

From the earliest days of technology, digital divides have been problematic. With the rise of e-government services and given the expected growth of IoT in smart cities, segments of society increasingly run the risk of not being able to fully engage needed services, employment opportunities, or community. This runs the spectrum of divides defined by incomes, age, rural versus urban location, ethnicity; and other characteristics.

All signs point to continued momentum, optimism, and interest among stakeholders in expanding smart city deployments. However, there are no guarantees IoT in smart cities technologies will progress from niche uses and experimentation, to comprehensive utilization; yielding digital transformed cities and communities. These are the types of outstanding issues and questions that government entities, citizens, and the private sector will need to work through in the years ahead.

Todd Thibodeaux is the president and chief executive officer of CompTIA, the leading non-profit trade association for the global technology industry. In a decade as the association’s top executive, Mr. Thibodeaux has led the expansion of CompTIA’s commitment to advancing industry growth through education and training programmes, market intelligence and research, networking events, professional certifications and public advocacy.