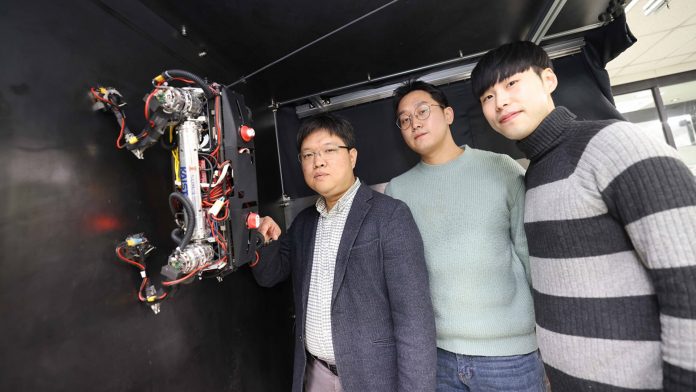 Experts at the Korea Advanced Institute of Science & Technology (KAIST) have developed a groundbreaking walking robot known as MARVEL.

MARVELis a quadrupedal walking robot capable of scaling steel walls and ceilings at high speeds due to its advanced magnetic adhesive properties. The walking robots will potentially have a plethora of applications, such as being programmed to conduct inspections, repairs, and maintenance tasks on large steel structures, including ships, bridges, transmission towers, large storages, and construction sites.

The research, ‘Agile and Versatile Climbing on Ferromagnetic Surfaces with a Quadrupedal Robot,’ is published in Science Robotics.

Traditional wall-climbing robots utilise wheels or endless tracks, which limits their mobility on surfaces with steps or irregularities. In contrast, walking robots for climbing have increased mobility but have significantly slower speeds and cannot perform various movements.

For a walking robot to be faster, the sole of the foot requires strong adhesion force and needs to be able to control the adhesion to rapidly switch from sticking to a surface to moving off it. Maintaining the adhesion force on a rough or uneven surface is also crucial.

To overcome these issues, the researchers developed a foot sole that can quickly turn the magnetic adhesive force on and off whilst maintaining high adhesive force on an uneven surface using an Electro-Permanent Magnet (EPM) and the Magneto-Rheological Elastomer (MRE).

An EPM is a device that can turn electromagnetic force on and off with little power. The advantage of EPMs over conventional electromagnets is that they do not require energy to maintain magnetic force. The team’s novel EPM has a rectangular structure arrangement, which allows faster switching whilst lowering the voltage required for switching compared to existing electromagnets significantly.

An MRE is an elastic material made by amalgamating a magnetic response factor such as iron powder with an elastic material such as rubber. The team successfully increased the frictional force without reducing the magnetic force of the sole of the walking robot by covering the sole with an MRE.

The new sole weighs only 169 g, providing a gripping force of around 535 Newtons (N) and a frictional force of 445 N – a sufficient gripping force for a quadrupedal walking robot weighing 8 kg. 535 N converted to kg is 54.5 kg, and 445 N is 45.4 kg. This means that even if an external force of up to 54.5 kg in the vertical direction and up to 45.4 kg in the horizontal direction is applied, the sole of the robot will not come off the steel plate.

How did MARVEL perform?

The walking robot climbed a vertical wall at a high speed of 70 cm per second and effectively walked while hanging upside down from the ceiling at a maximum speed of 50 cm per second – a  new world record.

The team also showed that MARVEL could climb at a speed of up to 35 cm, even on a surface that is painted, dirty with dust, and the rust-tainted surfaces of water tanks, demonstrating its exceptional performance in real-world scenarios. Moreover, it was experimentally demonstrated that MARVEL not only exhibited high speed but can also switch from floor to wall and from wall to ceiling, easily overcoming 5 cm high obstacles protruding from walls.

Yong Um, a PhD student of KAIST’s Department of Mechanical Engineering and one of the first co-authors of the research, concluded: “By the use of the magnetic soles made up of the EPM and MRE and the non-linear model predictive controller suitable for climbing, the robot can speedily move through a variety of ferromagnetic surfaces including walls and ceilings, not just level grounds.

“We believe this would become a cornerstone that will expand the mobility and the places pedal-mobile robots can venture into. These robots can be put to good use in executing dangerous and difficult tasks on steel structures in places like the shipbuilding yards.”