As demand for lithium rises, Edison Lithium Corp is preparing for a maiden exploration programme at the recently acquired lithium brine claims in Argentina.

Based in Vancouver, Canada, Edison Lithium is a junior mining exploration company specialising in the exploration of energy metals, primarily lithium and cobalt. The company has recently rebranded from Edison Battery Metals to Edison Lithium, signalling a shift in focus to lithium. Moving forward, the company aims to build a portfolio of quality assets to meet the growing demand for energy metals in the battery industry.

In June 2021, Edison Lithium acquired a 100% equity interest in lithium exploration company Resource Ventures S.A., based in Argentina. Resource Ventures owned or controlled the rights to more than 148,000 hectares (over 365,700 acres) of prospective lithium brine claims in Argentina, primarily located in two geological basins in the Northern Catamarca Province of Argentina known as the Antofalla Salar and the Pipanaco Salar.

Following on from this acquisition, Edison Lithium will initially focus on developing its properties at the Antofalla Salar. The company also plans to continue searching for and acquiring mineral properties in locations with proven geological potential for lithium.

In April 2022, Edison Lithium provided an update on the Environmental Impact Assessment (EIA) report for the prospecting phase of exploration that was submitted in November 2021.

A total of 24 claims, covering about 100,000 hectares (247,105 acres) in the Antofalla Salar basin, were included in the report, which was submitted to the Provincial Government of Catamarca (Secretaría de Estado de Minería) in Catamarca, Argentina.

Previous geophysical results suggested the presence of a 300m-thick potential brine zone, which the company plans to drill to confirm quality and grades. The geophysical survey results for certain claims are expected to identify additional drilling targets and the brine in the basin could extend to even greater depths. 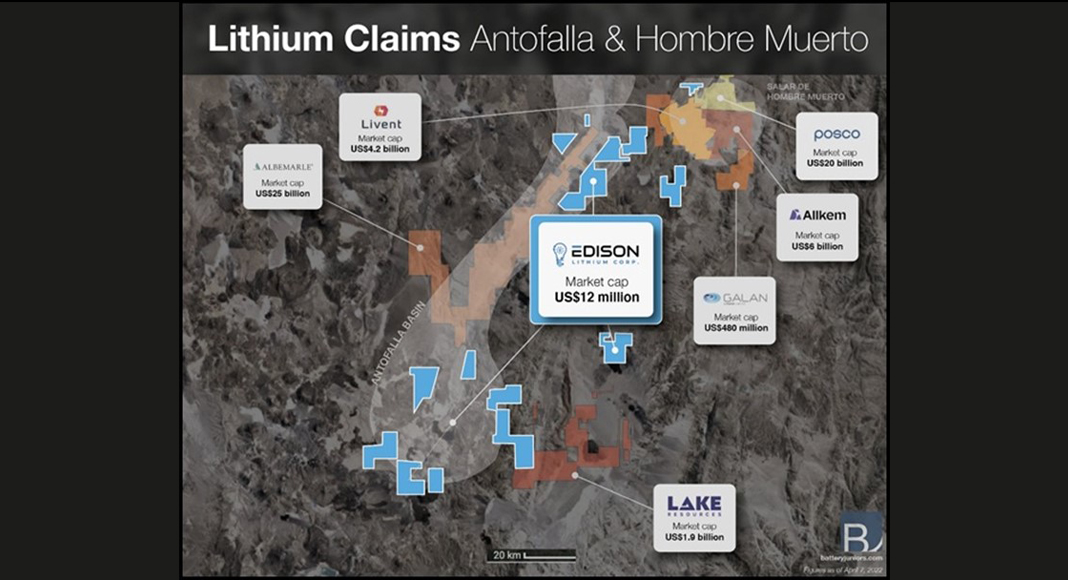 The 2021 USGS Mineral Commodity Summary stated that South America contains the world’s largest amount of lithium, with over 60% of the world’s lithium resources being found in Argentina, Bolivia, and Chile. However, mining in the region only accounted for 32% of world production.

Although Australia, Chile, and China are the largest producers of lithium, the government of Argentina has created a favourable regulatory environment to help drive more lithium production.

The Antofalla Salar is over 130km long and hosts one of the largest lithium-bearing basins in the region. Edison Lithium’s Antofalla Salar claims are located less than 20km west of a lithium production site owned by Livent Corporation, Argentina’s largest lithium producer in the Northern Catamarca Province. Livent has a market cap of $3.82bn and revenue of $420.4m in 2021.

Edison Lithium’s properties are also offset on either side of Albermarle Corporation’s holdings in the centre of the Antofalla Salar. Albemarle has a market cap of $24.71bn (C$30.97bn) and revenue of $3.12bn in 2021.

Less than 50km away from Catamarca city is the Pipanaco Salar project, which is in the very early stages of exploration. Only a few surface samples have been collected from the property. This salar is located at a much lower altitude when compared to Antofalla Salar. It was first drilled by the federal government of Argentina to identify new sources of fresh water.

Based on the previous drilling reports, the Pipanaco Salar holdings, located at only 700-750m above sea level, could be a favourable site to create a regional lithium extraction and processing facility.

Lithium is a silvery-white and very soft metal that belongs to the group of alkali metals in the periodic table. The element has high reactivity and the lowest density. As it becomes solid at room temperature, the metal is considered ideal for use in batteries as an active material.

There are three main sources of lithium: brine, hard rock deposits, and clay. About half of global lithium is produced from groundwater brine enriched in dissolved lithium. The remaining lithium is mined from hard rocks where lithium minerals are hosted in pegmatites. Lithium-rich clay is also considered a good source of lithium, where the metal is extracted using ferric sulfate solutions, also known as the ion-exchange leaching process.

Lithium is used in a variety of industries to produce batteries, glass, ceramics, and power tools. The electric vehicles (EV) industry is the biggest consumer of lithium, which mainly relies on the metal for the production of electric batteries. In 2020, the battery industry accounted for approximately 39% of global lithium demand.

As countries work towards the global energy transition, lithium’s importance as a strategic metal will increase and demand is expected to surge even more so.

The rechargeable yet lightweight nature of lithium-ion battery technology, alongside its ability to store large amounts of energy, has transformed the EV industry.

With the demand for lithium-ion batteries increasing exponentially over the past few years, the price of battery-grade lithium carbonate doubled from 2020 to 2021 and was up over 70% per year to date.

Unfortunately, the lithium supply is lagging behind the ever-growing demand for lithium, and the price of lithium is expected to increase further in the near future.

Another key focus for Edison Lithium is the battery metal cobalt, following its 100% interest acquisition of the Kittson Cobalt Property in January 2017.

The Kittson Cobalt property comprises approximately 1,090 hectares (over 2,690 acres) and is located near the town of Cobalt in Northeast Ontario, Canada. It is home to the historic Thomas Edison, Shakt-Davis, and Cobalt-Kittson mines.

Historic reports from the Shakt-Davis mine indicated values of 1.5% cobalt over 1.37m and select grab samples returned up to 4% cobalt and 93.3g per tonne of gold.

The project also has numerous historic workings and over 2,500 feet of lateral workings, with the deepest extending down to 628 feet.

With a market cap of only C$15m, Edison Lithium trades at a significant discount to its exploration peers considering the size of its land package.

With control of more than 148,000 hectares of prospective lithium brine claims in Argentina, Edison Lithium is in a good position to capitalise on any lithium supply shortfall.