Diane Cameron, Head of the OECD Nuclear Energy Agency’s Division of Nuclear Technology Development and Economics, discusses the role of nuclear energy in the global drive toward net zero.

Many major economies committing to reduce their carbon emissions to meet climate change goals are relying on nuclear energy and will be doing so for decades. Analysis by the Nuclear Energy Agency (NEA) has shown that global installed nuclear capacity will likely need to triple by 2050 to meet climate change mitigation targets. To do so, this will require a significant increase in investment and innovation in the sector and, above all, a recognition that the technology has to be a part of global climate change mitigation efforts.

The COP26 UN Climate Change Conference held in 2021 and a global rise in uncertainty over energy security and prices have combined to make nuclear energy a more integral part of the global conversation. This renewed interest must now be translated into energy and climate policy frameworks.

The NEA has been underlining the role nuclear energy should play in reaching the objective set by the Paris Agreement: limiting global warming to well below 2°C and preferably 1.5°C. This would require achieving net zero emissions by 2050 at the latest.

Amongst the more pressing questions is how to rapidly mobilise climate and development financing. Multilateral development banks and international financial institutions have a role to play in supporting the emissions reduction projects needed to meet the Paris Agreement goals. Technology-neutral policies where nuclear energy would be included in that financing push would help determine a number of countries’ success in reaching that goal.

Understanding the true costs of energy

The first step is to understand the advantages and full costs of each energy source. A recent analysis of the levelised cost of electricity by technology showed that the long-term operation of existing nuclear reactors is the most cost-competitive, low carbon electricity solution in many parts of the world. The continued use of currently working nuclear reactors worldwide through long-term operation could avoid 49 gigatonnes of CO2 emissions between 2020 and 2050.

A system-level approach is necessary to understand the costs of maintaining a high security of supply at all times. Such an approach takes into account the plant-level costs, as well as the grid-level costs of compensating for variability and uncertainty, and the costs of connection, distribution, and transmission. This is particularly important in contexts where large amounts of variable renewable energy sources, such as wind and solar, are being deployed to help with emission reductions. These renewable sources of electricity have become much more competitive to install in recent years and have contributed to limiting the growth of carbon emissions. However, they impose costs at the grid level because they introduce more fluctuations in supply. The grid-level costs of electricity have come into focus in some countries and regions that have recently experienced blackouts in power supply due to a variety of intertwined factors.

At this level, nuclear power plants have the advantage of helping to stabilise electricity grids by serving as a baseload source of power. In many countries, particularly developing economies, highly polluting coal plants serve as the main baseload source of power – coal accounts for over a third of all electricity and 40% of all carbon emissions. Many other countries are reliant on natural gas, which is often imported, sometimes with strategic risks.

One of the big achievements at COP26 was the promise by 23 nations to join a 190-country effort to transition away from coal. The move was significant as the group of nations includes five of the 20 top coal-power-consuming countries. Replacing coal power plants with nuclear technology is a cost-effective way to shift this electricity production to a low carbon technology without losing the benefits of a constant and stable source of energy.

A full analysis of the costs of energy includes social and environmental costs. These clearly include atmospheric pollution and the impact on land use and biodiversity. They also encompass positive impacts such as employment, economic development, and the spin-off effects from technological innovation, which can be significant in the case of nuclear energy.

The key takeaway for policymakers is that the system-level costs of electricity increase as the share of variable renewables grows and carbon emissions become more constrained. However, the precise calculation and optimal policy mix will vary depending on country characteristics, including (for example) access to hydropower and the level of interconnection capacity with neighbouring countries.

The COP26 talks have also highlighted a growing interest around the world in nuclear energy innovation, including small modular reactors (SMRs). This wave of innovation promises to improve the flexibility and economics of nuclear power with standardisation and modularisation of designs as well as inherent safety features.

There are several SMR designs at different levels of development and demonstration. They aim to offer a variety of sizes – from 1 to 300 MWe – and temperatures – from 285°C to more than 850°C. They could provide a great deal of flexibility, meaning they can be fitted off-grid, for example in remote communities or mining sites, or used for long-distance shipping – a sector that has struggled to reduce its carbon footprint.

SMRs may also offer industrial heat together with electricity – the first real non-emitting alternative to fossil fuel cogeneration. This is particularly attractive for climate change mitigation efforts as industrial heat is a high-emissions activity that has so far proved hard to abate.

Another potential use for advanced nuclear systems is in the production of hydrogen, which is expected to play a leading role for the decarbonisation of hard-to-abate sectors, such as transport, particularly over long distances. Its production, however, is energy intensive and a good fit for cogenerative, advanced nuclear reactors.

Some innovative designs seek to recycle nuclear waste from existing reactors, reducing the overall amount of spent fuel and high-level radioactive waste that will require final disposal. This can help reduce concerns from the public about radioactive waste, which in some countries has been a key issue when considering nuclear energy. Although there is a scientific consensus that current waste management and disposal methods are safe and technologically mature, the question remains a topic of political debate.

Some SMRs are likely to be commercialised in the coming decade, depending on the level of regulatory efficiency in each country, the available financing models, and market dynamics. The NEA estimates that the SMR market could reach 21 GW by 2035, with a more rapid uptake after that. Assuming a build rate that reaches 75 GW a year by 2050, up to 375 GW of installed capacity would be built between 2020 and 2050. This would translate into avoiding 15 Gt of cumulative CO2 emissions.

This, together with the long-term operation of nuclear power plants and the construction of large-scale Generation III reactors, could lead to some 87 Gt of cumulative CO2 emissions being averted between 2020 and 2050. That is the equivalent of more than two years of global carbon emissions at 2020 levels.

By mid-century, nuclear energy could displace 5 Gt of CO2 a year, which is more than the entire US economy emits annually today. 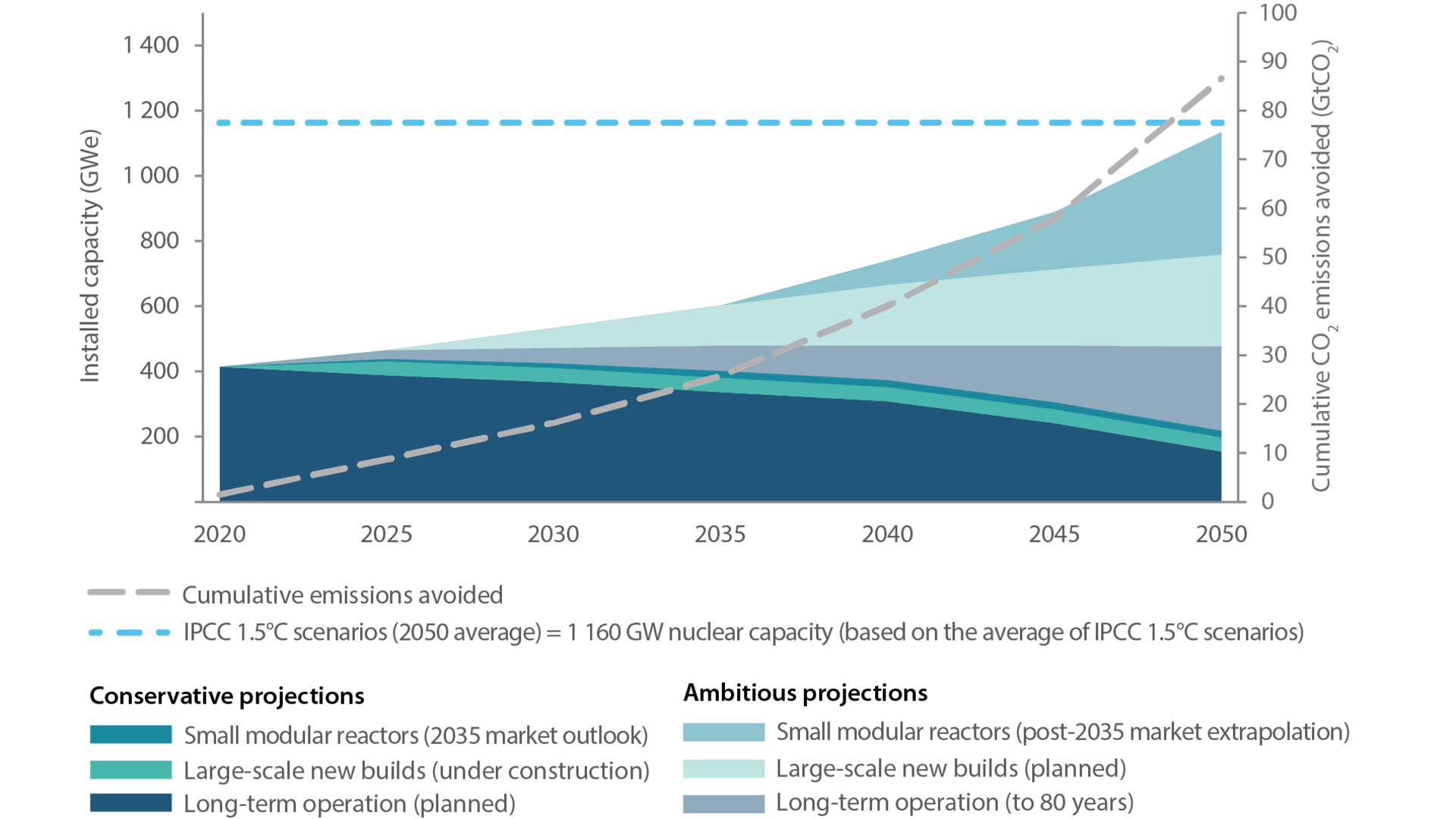 Paving the way for success

The figures above are not forecasts, but what could be achieved with timely policy and investment decisions.

Time is indeed of the essence, as the world is not on track to meet the Paris Agreement targets. Carbon emissions must peak in the next few years and drop to zero by 2100. Instead, they are currently rising after a temporary dip caused by the COVID-19 pandemic restrictions. Reference climate scenarios estimate they will rise another 16% by 2030.

The average of 90 pathways identified by the UN’s Intergovernmental Panel on Climate Change to keep global warming to 1.5°C foresees an increase in the use of nuclear energy equivalent to a tripling of nuclear capacity to 1,160 GW. The world presently has about 400 GW of nuclear capacity.

Unlocking the potential contributions of nuclear energy requires a long-term political vision and suitable approaches to regulation, financing, and other enabling policies.

Experience shows that, under the right conditions, nuclear power projects can be delivered in time and within budget. The Barakah plant in the United Arab Emirates (UEA) shows this can be done even with current nuclear designs. In China and Korea, construction lead-times for large existing nuclear reactor designs with increased safety are around five to six years or less.

Any effort to consider or ramp up nuclear energy in a country requires the involvement of all stakeholders to ensure public confidence in all stages of nuclear projects – from mining to R&D, operations, and waste management and disposal. Building trust requires sustained investment in open and transparent dialogue and science communication. Public confidence is not merely a communication issue, but entails complex issues of values, trust, and culture.

The public debate around the future of nuclear energy has picked up in intensity from previous years, when many countries – even those that used nuclear energy – refused to give it much recognition.

Many countries are now counting on or turning to nuclear technology as a key part of their climate change mitigation plans. The NEA will continue to support efforts to ensure a safe, environmentally sound and economic use of nuclear energy, including through active engagement at COP27, which will be held in Egypt in November 2022.

A version of this article has been published previously in NEA News, the biannual publication of the Nuclear Energy Agency.