Maritime drone creator based in centre of Europe 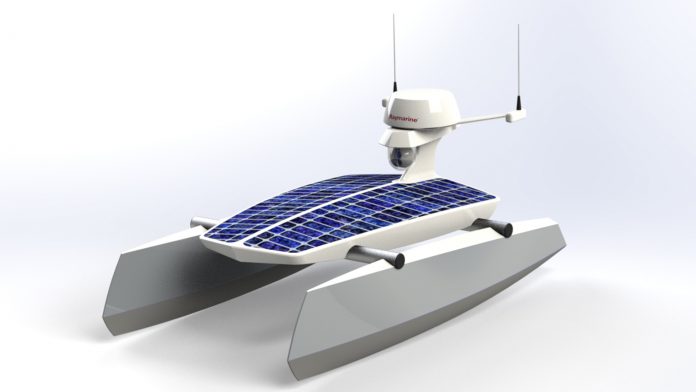 Stromkind GmbH is a maritime drone creator based in Upper Austria, in the centre of Europe. With its products, Stromkind aims to address various problems in the maritime world through innovative solutions. The KAT-300™ is a modular Unmanned Surface Vehicle (USV), which can be equipped with a wide range of sensors to measure water quality or detect oil; or with active actuators which can remove waste, seaweed or plastic particles from the water. Depending on the configuration of the platform it can be operated remotely, semiautomatically; or as a fully autonomous self-driving solar powered 24/7 platform, equipped with collision avoidance capability and an Artificial Intelligence (AI)-enabled route finder onboard.

Stromkind’s latest product innovation, the TURTLE™ dive robot, can be launched from the KAT-300™ System and can dive up to 50m. The TURTLE™ is an innovative underwater robot, with a revolutionary propulsion system without propellers and a wireless communication system. The company has successfully demonstrated use cases around the world, showcasing the integration of its products in surveillance applications such as harbour control; where the system was equipped with radar head, daylight and infrared camera, AIS and Lidar.

Infrastructure inspection with the Lidar Laser Scanner above the surface and with Sonar Head and Channel Sounder underwater allows the user to conduct pier inspections, identifying hidden structures of bridges; and detecting and identifying objects underwater such as seaweed, sunken ships or waste which may block waterways. The platform can also be used in a variety of ways in fish farms. It had been deployed as a fish finder and fish counter, fish feeder; and as a vaporiser for chemicals used in aquaculture.

The KAT-300™ maritime drone has been used in several microcargo applications: as a spare parts provider for ships; as delivery system from ship to ship; bringing paperwork from ship to island; and delivery of medicine and urgently needed goods from island to island. Stromkind aims to develop the KAT-500C™ and the KAT-1000C™ system to include the capabilities to transport electrically containers and conduct overnight deliveries within cities. Spraying pesticides precisely where they are needed, for example to reduce mosquitos and zebra flies, is one of the active tasks that has been demonstrated with the KAT-300™ in Asia. Further projects will be conducted in 2020 in South America and the USA.

One of Stromkind’s ongoing research topics is the detection of crude oil, heavy fuel and aviation fuel. The platform can be equipped with an oil detection sensor which can detect oil within one second. Equipped with the available spraying device, the system can immediately be used to neutralise surface oil or gasoline. If it becomes necessary to remove oil from the water’s surface, an oil skimmer can also be installed on the platform. One KAT can remove about 20l-40l/h hour of surface oil from water. Several KATs can work simultaneously on a task and then automatically return to their home point when the oil tanks are full.

Moreover, microplastics are currently a major issue. The longer plastic waste is in the water and the more abrasion or ultraviolet sunlight damages the material, the more plastic particles will be in the water. Thus, the faster we can get larger plastic items out of the water, the better chance we have to reduce the problem of microplastics.

Stromkind addresses this problem with a patented SEMP-Filter cassette option for its maritime drone platform. Microplastics can be filtered, while the main body of the water remains largely untouched. To cover bigger areas, several KAT-300 systems can be combined; or the bigger version of the KAT can be equipped with the waste removal actuators. Each system can be connected virtually as a swarm and controlled by one single ground control station (GCSONE™).

The SYLENTS propulsion system is more efficient than any diesel or gasoline powered systems or any other conversion to electrical propeller systems so far. The propulsion system can be equipped with asynchronous and synchronous electric motors for extraordinary power-to-weight ratio. To ensure safe operation, the propulsion unit can be operated up to with 48V or HV Systems up to 400V.

The propulsion system is also used in the latest development of the company portfolio; the fire fighter KAT-300F. Fire on the water is the most dangerous situation that can happen and firefighting boats are not available in every harbour, especially not in smaller harbours and marinas.

The new system, with hot stand by capability and an ultra-fast propulsion system, allows the fastest possible interaction with a built-in fire extinguisher or jet pumps in the case of fire incidents. The integrated maritime drone can be launched on site; and gives the helper useful information regarding the situation, as well as detecting people who had to leave the boat. Another KAT300 equipped with a potentially lifesaving emergency float can be launched remotely.

Technology for the future

Aside from its maritime unmanned systems and diving robots, Stromkind is developing an electrical personal watercraft which addresses the needs of emergency services and the maritime tourism industry: e-mobility on the water is a growing concern.

The safety aspect in comparison to conventional jetskis or yachts was taken into account with this development. The manned version of the E-JET is powered by the electrical ultra-silent SYLENTS propulsion unit with 25 to 50kW; and is equipped with a battery for rides lasting one to two hours. A true innovation is that this platform is remotely controlled through ‘drive by wire’ technology; and can be equipped with numerous sensors as well. This platform is then intended to conduct tasks where speed is an issue, such as rescuing people from the ocean.

Stromkind’s award-winning maritime drone technologies will hopefully eventually be implemented in many of the problems facing the sector today.