The challenges of feeding protein to high producing dairy cows 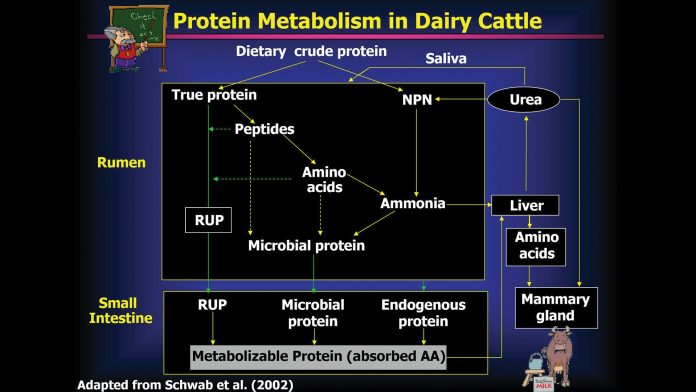 Environmental conditions in the ruminant stomach, such as in dairy cows, support a complex microbial population that alters protein before it reaches the ‘true stomach’.

The stomach of ruminant animals such as the dairy cow consists of four compartments: the rumen, reticulum, omasum, and abomasum (referred to as the ‘true stomach’). Ruminants are Earth’s dominant herbivores because of a mechanism that evolved utilising micro-organisms to digest cellulose, a structural component of plants needed to support stems and leaves. Cellulose is probably the most common organic chemical on Earth, and yet it is not susceptible to attack by mammalian enzymes. Because the rumen ecosystem contains microorganisms that produce cellulase to hydrolyze cellulose, ruminant animals can use cellulose as an energy source. The rumen is a complex anaerobic microbial ecosystem with various microbial populations including bacteria, ciliated protozoa, archae, fungi and bacteriophage.

Essential differences between the digestive tracts of non-ruminants and ruminants are well recognised. In humans and pigs, dietary protein that is consumed usually provides an accurate assessment of amino acid uptake from the small intestine. Unfortunately, this is not the case with ruminants. Ruminant digestive processes are different from non-ruminants in that pre-gastric modification of feed results in a completely different pattern of nutrients entering the intestines to that which was fed. Ruminal microbes account for approximately 70% of digestion that takes place in the ruminant gastrointestinal tract. Intervention of microbes into digestive processes of ruminants causes substantial degradation of dietary protein and carbohydrates, and synthesis of microbial protein. Because these microbes are constructive and destructive in their action, providing nutrients to ruminants is more complex compared with simple stomach non-ruminant animals such as swine, poultry, and equine species.

Dietary protein is divided into ruminal degradable (RDP) and undegradable protein (RUP) with RDP comprised of nonprotein and true protein nitrogen. Nonprotein N (NPN) consists of N present in DNA, RNA, ammonia, amino acids (AA), and small peptides with N from peptides, AA, and ammonia being used to synthesise microbial protein (Bach et al., 2005).
One of the major advantages of pregastric fermentation by rumen microbes is the ability to transform NPN into high quality microbial protein.

True dietary protein is degraded to peptides and amino acids (AA) that are deaminated to ammonia N and incorporated into microbial protein. When maximal protein synthesis in the rumen is reached, ammonia N is absorbed across the rumen wall directly into the blood stream to the liver where urea is formed. Urea is extracted from the blood by the kidneys, then excreted in the urine or re-cycled via the saliva. Re-cycling of N is another anomaly that occurs in dairy cows, with an average of 10-15% of total dietary N intake recycled daily as urea. Under typical dairy cattle feeding conditions, manipulation of rumen protein degradation or alteration of microbial protein synthesis in the rumen are effective strategies to reduce N losses (Tamminga, 1996). Losses of N may be reduced by decreasing protein degradation in the rumen and (or) increasing N use by ruminal micro-organisms.

Protein degradation in the rumen

Microbial protein that is synthesised in the rumen can be adequate for low producing ruminants but inadequate for supporting higher levels of growth, wool, or milk production. In high milk producing dairy cows, additional protein must be provided from dietary protein that leaves the rumen undegraded to meet the cow’s protein requirement. Utilisation of high RUP in diets fed to dairy cows with high protein requirements can improve the amino acid supply to the animal provided that enough RDP is included in the diet to maximise microbial protein. Therefore, it is essential to understand the process of ruminal protein degradation.

Protein degradation in the rumen is the largest variable in estimating the amount of protein supplied to the small intestine because it dictates N availability to rumen microbes for growth and how much protein leaves the rumen undegraded. The process of dietary protein degradation in the rumen involves attachment of bacteria to feed particles, followed by activity of cell-bound microbial proteases. A large number of different microbial species form a consortium that attaches to a feed particle, acting symbiotically to degrade and ferment nutrients, including protein. Products resulting from this process are peptides and amino acids. The rate and extent at which protein degradation occurs depends on proteolytic activity of the ruminal microbes and type of protein (susceptibility and accessibility of peptide bonds).

Peptides and AA resulting from the extracellular rumen proteolytic activity are transported inside microbial cells. Peptides can be degraded further by peptidases into AA and the latter can be incorporated into microbial protein or further deaminated to VFA, CO2 and ammonia. The fate of absorbed peptides and AA once inside the microbial cell will depend on availability of energy in the form of carbohydrates. If energy is available, AA will be transaminated or used directly for microbial protein synthesis. If energy is limiting, AA will be deaminated and their carbon skeleton fermented into volatile fatty acids (VFA). Some ruminal bacteria lack mechanisms of AA transport from the cytoplasm to the extra-cellular environment and AA absorbed in excess must be excreted from the cytoplasm as ammonia (Tamminga, 1979).

Ruminal protein degradation is a complex process influenced by various factors such as protein structure, stage of plant growth, protein solubility, microbial proteolytic activity, microbial access to the protein, ruminal pH and ruminal retention time of dietary protein which can be influenced by particle size. There is an inherent variability in values for RUP among protein sources, however there is also variability in RUP content within protein supplements that can be attributed to processing method and/or raw material used. The RUP value can be altered by various factors including time before processing, humidity, temperature, heating time, etc.

The result of overheating can cause a Maillard reaction where the epsilon amino group of an amino acid reacts with an aldehyde from sugars forming a resistant bond. This reaction will not only reduce protein degradation in the rumen but can also render protein less digestible in the small intestine. The determination of optimal processing conditions and routine control of these conditions can reduce variation and improve quality of protein supplements. One of the major challenges in the dairy feed industry is to provide dairy producers with consistent high quality protein supplements.

Microbial protein synthesis in the rumen

There are three key points that emphasise the importance of microbial protein to the high producing dairy cow. First, microbial protein synthesis in the rumen provides the majority of protein supplied to the small intestine of dairy cows, accounting for 50-80% of total absorbable amino acids from the small intestine (Bach et al., 2005). The remainder of the supply is derived from ruminal undegraded (RUP) dietary protein and endogenous protein. Second, microbial protein is extremely high in protein quality (amino acid profile) compared with animal products and dietary protein sources. The two-first limiting amino acids for milk production, lysine, and methionine, are greater or similar in ruminal bacteria and protozoa compared with wool from sheep, tissue from beef cattle, or milk from dairy cows.

Carbohydrates are the main energy source for bacteria, although they can also be used as carbon skeletons for protein synthesis in combination with ammonia. Ruminal microbial protein synthesis depends on supply of adequate amounts and type of carbohydrate as an energy source for the synthesis of peptide bonds. Readily-fermentable carbohydrates such as starch or sugars are more effective than other sources such as cellulose and hemicellulose in promoting microbial growth (Stern and Hoover, 1979).

Stern and Gomez (2018), recently discussed benefits of using dual flow continuous culture fermenters, also referred to as ‘artificial rumens’, as an alternative to live animals to study dietary impacts on rumen microbial metabolism and the microbiome.
Using these fermenters, Stern et al., (1978) demonstrated that the inclusion of increasing amounts of readily-fermentable carbohydrate decreased ammonia-N concentrations due to improved N uptake by ruminal microbes. Synchrony of nutrient availability in the rumen can also affect protein synthesis. When the rate of protein degradation exceeds the rate of carbohydrate fermentation, large quantities of N can be lost as ammonia, and conversely when the rate of carbohydrate fermentation exceeds protein degradation rate, microbial protein synthesis can decrease (Nocek and Russell, 1988).

In addition to the supply of carbohydrate and N sources, there are other nutritional factors such as sulfur supply, and non-nutritional factors such as ruminal pH and dilution rate that play important roles in microbial protein synthesis. Low ruminal pH is the result of fermentation of large amounts of available OM. When the quantity of OM fermented increases, microbial protein synthesis also increases (Hoover and Stokes, 1991). As a result, a negative relationship between pH and bacterial N flow is a consequence of increasing supply of energy with highly fermentable rations resulting in lower ruminal pH.

This procedure was developed to:

The use of this technique resulted in the NRC (2001) assigning estimates of intestinal digestion to the RUP fraction of each feedstuff. A considerable amount of variation among and within feeds in ruminal degradation and intestinal digestion of protein has been reported (Calsamiglia and Stern, 1995; Howie et al., 1996; Yoon et al., 1996). It is important that this variation be considered when determining the value of feeds as sources of protein for the ruminant animal. This variation can possibly be influenced by source of raw material, quality of raw material (storage time and temperature), drying conditions, and various other factors.

Substantial progress has been made in the past forty years in understanding the complexity and intricacies of protein metabolism in dairy cattle. Elaborate models have been developed to formulate diets with greater accuracy in meeting protein and amino acid requirements in high producing dairy cows. Models for feeding protein to dairy cattle in the USA evolved from basic crude protein (NRC, 1978), which is simply the measurement of nitrogen in a feedstuff, to complex systems based on rumen undegraded protein (RUP) and intestinal digestion of RUP (NRC, 2001) generally referred to as ‘Metabolizable Protein’.

A new NRC publication on ‘Nutrient Requirements of Dairy Cattle’ is soon to be released. Based on the knowledge we have acquired from research over the past 20 years, it will be interesting to learn what revisions to the previous model have been made and what the recommendations for feeding protein and amino acids to high producing dairy cows will be.