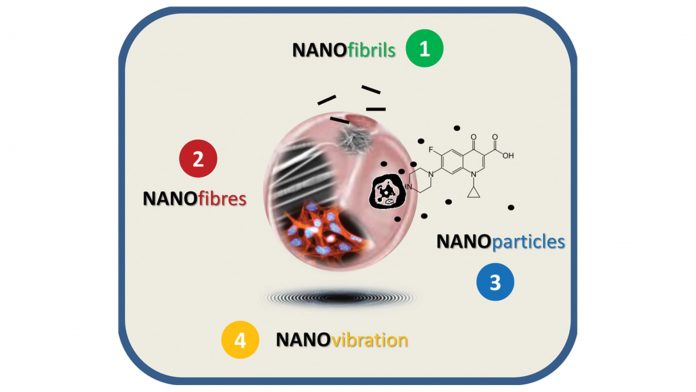 An optimal eardrum reconstruction following otitis-related large perforations still represents a clinical challenge, which can be faced on the nanoscale

The ear is one of our sensory organs, devoted to hearing. It consists of three compartments: outer (for collection), middle (for conduction) and inner (for conversion of sound waves into electric signals). In the inner part, proper sensory function takes place, whereas our brain elaborates the electric signals carried by neurons into the hearing sense. These three compartments work serially with increased complexity.

However, everything starts at the eardrum, or tympanic membrane (TM) – a thin, flexible and tough membrane, separating the external from the middle ear compartment. Indeed, TM is the prime functional tissue devoted to the collection and transmission of sound waves, by leading the mechanical sound conduction process which occurs through a vibratory motion with displacements on the nanoscale level.

TM is provided by nature with unique anatomic nanoscale features that, ultimately, allow a superb physiologic performance in varying frequency ranges (20-20.000 Hz in human beings). Awesomely, the eardrum works as a high-fidelity sound transmitter, usable for transient recognition in a way that is still poorly understood by scientists.

Several pathologies damage this tissue and cause conductive hearing loss (CHL), such as:

Chronic Otitis Media occurs when the middle ear is permanently or repeatedly inflamed, leading to eardrum perforations which result in (temporary) CHL and long-term hearing damage. No form of Chronic Otitis Media, including cholesteatoma, can heal without proper medical and/or surgical therapy. In addition to (temporary) CHL and purulent secretion, Chronic Otitis Media often results in eardrum defects. Causes include frequent, acute inflammation of the mouth in childhood, chronic malfunction of the Eustachian tube, genetic factors and types of bacterial colonisation.

According to the World Health Organization, more than 32 million people worldwide are estimated to suffer from purulent Chronic Otitis Media. Of these, more than 16 million show hearing impairment, such as hearing loss, tinnitus or dizziness. In Europe, 5.2 million people are affected by Chronic Otitis Media, 50% suffering from complications and recurrence, thus undergoing systemic administration with antibiotics for many years, with high costs for national health services, and at a high risk of developing drug resistance.

Theoretically, and provided the infection has not reached the inner ear, the CHL produced by Chronic Otitis Media is about 30 dB, but it may increase to levels up to 60 dB. Higher levels of hearing loss may result if the infectious process involves the inner ear, or if patients are also exposed to potentially ototoxic drugs. Hearing loss concurs to neurodegenerative decline and falls in the elderly and affects language development in childhood. In general, it brings social isolation and depression. In time, the aggressiveness of the chronic inflammation within the middle ear environment, caused by bacterial colonisation, leads to ossicle erosion (to be replaced with prosthesis) and eardrum perforations, thus requiring reconstructive interventions. It is a fact that the optimal TM replacement still represents an unmet clinical need.

The materials used so far to repair TM either act as self-repair adjuvants (e.g., paper patches) for small perforations, or as whole graft replacements upon tympanoplasty (e.g. temporalis fascia, perichondrium, or cartilage taken from the patient or cadavers). However, using these approaches, sub-optimal hearing outcomes and take rates have often been observed.3 As a consequence, new hope has been placed in tissue engineering strategies for TM.

Indeed, the acoustical and mechanical properties for sound pick up and propagation vary among the different materials, which makes it difficult to reconstruct the hearing function properly. A complete acousto-mechanical restoration of the TM structure cannot take place, since all autologous materials do not fulfil the anatomic characteristics of the native TM. The larger the defect, the more difficult its closure with autologous material, which is not always achieved. In addition, hearing outcomes cannot be predicted preoperatively and also depend on the surgeon’s experience. Several days after the procedure, the success can be subjectively determined via audiometric measurements.

Autologous tissue is not always a permanent solution for the closure of a TM defect, especially in cases of chronically inflamed ears in which graft tissues are often resorbed. Unfortunately, only 1 out of 9 patients affected by Chronic Otitis Media in Europe is willing to accept surgical treatment. Reported causes for patients to refuse surgical solutions, in favour of either less resolving and more expensive pharmacological or non-existent solutions, refer to empathetic diffidence or misjudgment toward the surgical approach, also fomented by the risk of failure.4

Engineered eardrums of the future

Providing fully effective eardrum replacements is indeed the subject of the European project 4NanoEARDRM, which has been funded in the framework of the EuroNanoMed III 2017 programme, with a budget of €1m. Under a nano-to-macroscale approach, and by combining and synergising tissue engineering and nanomedicine, 4NanoEARDRM aims at restoring a perfect hearing function and maintaining a healthy middle ear environment in the meantime, thus fighting against Chronic Otitis Media recurrence.

4NanoEARDRM aspires to impact the Chronic Otitis Media burden on the NHS by offering more reliable and less invasive reconstructive solutions that will increase patients’ confidence towards surgical treatments, which will become more and more conservative of the ear anatomy.
To date, there is no industrially manufactured replacement that could solve this exposed gap.

New replacements will have four main nanoscale features, which also reflect the perfect connection between anatomy and physiology designed by nature, and will provide anti-inflammatory and antimicrobic molecules:

1) Nano- to microfabrication for tissue mimicry

Histologically, TM is a tri-laminar tissue. The mid layer is connective tissue proper, while the outer layers are epidermal or mucosal epithelia. The largest area of the eardrum, in charge of the vibratory function, is pars tensa, which is made up of collagen type II nanometric fibres. The really unique feature of TM is that such collagen, present in large amounts only in cartilage and as produced by chondroblasts, is synthesised by TM fibroblasts with perfect arrangement. The deformation resistance of TM is due to specific spatial orientations of these fibres that reflects, and is essential for, TM function. In 4NanoEARDRM, biodegradable polymer nanofibre scaffolds, mimicking the native collagen network, will be produced via electrospinning and additive manufacturing to support both regenerative and acousto-mechanical functions, until complete tissue repair.5

Chitin is a green component derived from fish from food industry waste. Unlike macro-size chitin, which causes inflammation, chitin nanofibrils (CNs) are highly biocompatible and exert immunomodulatory, anti-inflammatory and antibacterial properties, and are approved in dermatology and cosmetics.6 We aim to exploit some self-defending weapons of the human epithelium that are present in the middle ear and TM. Epithelia are a key part of the innate immune system by acting as a first barrier against external microbial threats. In response to pathogens, epidermal keratinocytes secrete an array of soluble cytokines and chemokines, and also antimicrobial peptides (i.e. defensins) to initiate an active immune response, which displays a broad spectrum of microbiocidal activity against Gram-positive and Gram-negative bacteria, fungi and the envelope of some viruses. The anti-inflammatory and re-epithelialisation properties of CNs have recently been shown. CNs are able to stimulate defensin production by keratinocytes and decrease pro-inflammatory cytokine expression. Exploiting these natural nanofibrils would reduce the use of chemical drugs and help fight COM recurrence.

Polymeric nanoparticles (NPs) that are prepared by biodegradable and biocompatible materials can serve as depots to deliver the drug over prolonged periods in a controlled way, with reduced doses and side effects versus systemic therapies (e.g. pills or injections). Thus far, traditional bottom-up NP preparation methods have been generally difficult to scale up to pilot and industrial stages, due to the great number of parameters to be controlled for reproducible results. However, recent industrial efforts have enabled microreactors to produce size-controlled and precise release profiles. A molecule-tunable system will finally enable personalised treatments depending on the specific bacteria involved in Chronic Otitis Media

By vibrating through frequency dependent displacements on the nanoscale, TM acts as an overall high-fidelity sound transmitter, which is essential for the hearing sense as it relies on the recognition of transients. As such, suboptimal performance is achieved using isotropic patches or different tissue analogues. By modelling and controlling the manufacture features on the nano- to microscale it will be possible to tune its mechanic and acoustic properties, which in turn will lead to optimally functional replacements.

Using these four pillars, 4NanoEARDRM will synergise different nanotechnologies for optimal eardrum restoration, through the consideration of acoustic, regenerative and pathologic cues towards a durable and effective performance in implanted patients. Both from a societal and economic viewpoint, the success of nano-engineered eardrums would contribute to improved treatment of TM defects and, with thus, a long-term cost reduction for national health services. The resulting public attention to the future market of nanobiotechnology would also result in business, network and R&D opportunities.