Measuring neutrinos has led us to design large, sensitive detectors and produce very intense particle beams. It turns out this combination is exactly what you need to search for a variety of other theoretical particles – neutrino detectors are good for a lot more than just detecting neutrinos.

Neutrinos, often referred to as ‘ghost particles’, are tiny, neutral, almost massless particles.  Constantly whizzing around us, they rarely interact with anything else, but may hold the clues to why the Universe looks the way it does. First proposed to ‘fix’ a problem with existing theories not being able to describe experimental data, the neutrino has continued to surprise us with new strange behaviours which we are still trying to fully explain. To measure such an elusive particle, we build large detectors – usually ranging from hundreds to thousands of tons in mass, but sometimes even bigger – and we direct intense beams of particles at them. By placing large absorbers between the beams and our detectors, nothing but neutrinos make it through. The bigger the detector, and the more intense the beam, the more neutrinos you will see.

Over time, we have become very good at building neutrino detectors that are not only large, but also very sensitive. When neutrinos interact in a detector, they produce a variety of particles. The more of these you can measure, the more you can learn about the neutrino that interacted. In order to understand the neutrinos’ behaviour, we want to measure as many of them as we can and measure them as well as possible. Modern detectors are designed to be able to precisely measure as many of the interaction products as possible. This allows experimenters to determine the neutrino type (also known as the flavor), the neutrino energy, and the neutrino direction.

It turns out, once you have a large, very sensitive detector, and an intense beam of almost invisible particles, you have built the perfect experiment to search for a host of other theoretical particles. From dark matter to heavy neutrinos, millicharged particles to magnetic monopoles, a large number of theoretical particles have been proposed to patch holes in our understanding of the Universe – just like the original need for the neutrino. In general, these theoretical particles must be hard to detect, like the neutrino (otherwise we would have seen them already), so it makes a lot of sense to look through the data from our large and sensitive neutrino detectors to look for hints of other new physics.

Some of these particles are highly sought-after solutions to theoretical problems. Dark matter is needed to explain the rotation of large galaxies, and heavy neutrinos are needed in some theories to balance the very small mass of the neutrino (amongst other reasons, to hypothesise their existence). Such ‘heavy’ particles could appear in the beam just like a regular neutrino, but being heavy they would travel a little slower and arrive at the detector later. By looking for neutrino-like interactions after the neutrino beam has passed, we can search for this kind of delayed signature. Some particles are not expected to interact in detectors at all but could instead decay inside the detector. Such a decay would look suspiciously like a neutrino interaction. The difference, however, is that a neutrino interacts with the nucleus of an atom, and that nucleus will be impacted by it either ‘recoiling’ from the interaction, or spitting out protons and neutrons due to the disturbance. A decaying particle would leave no such signature, and so can be identified amongst the neutrinos, provided the detector is sensitive enough to tell the difference. 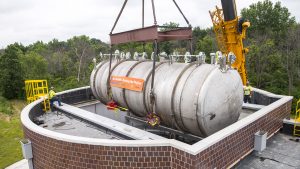 Some detectors are also sensitive to the potential existence of other particles. One example is ‘millicharged particles’. Such a particle is not electrically neutral like a neutrino, but has a much lower charge and so interacts much less with a detector. These would look a bit like electrons, or their heavier cousins known as muons, but much fainter. This faintness would make them look like random noise in a small detector, but a dedicated search in a large neutrino detector would be able to find them (depending on how small their charge is, of course). Other such hypothetical particles we can look for include ‘magnetic monopoles’, which would behave like a magnet that has one end removed, so it is only a north or south pole. A variety of theories predict such particles, though their characteristics are hard to pin down theoretically – again, the best bet is likely a large highly sensitive detector.

The neutrino was first proposed to solve a problem, and since its discovery has only continued to surprise us. Our desire to learn more about neutrinos has led us to develop experiments that are now sensitive to potential solutions to other problems. We are ready for these detectors to reveal new surprises.