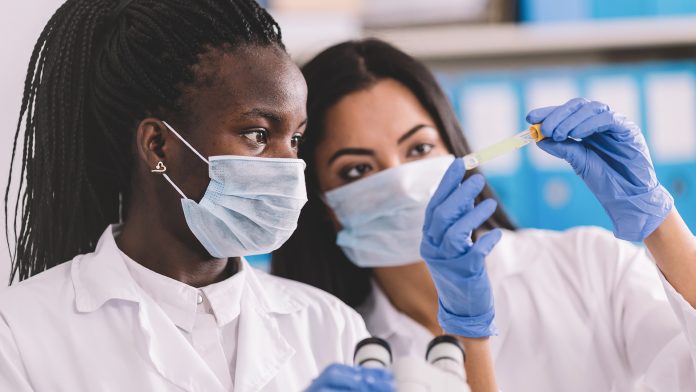 Three extraordinary women in science from the Global South were the first to be cast into the spotlight as part of a series of monthly reader conference calls hosted by SciDev.Net’s team of regional editors.

To coincide with International Women’s Day, SciDev.Net held an event to spotlight women in science with Professor Mamokgethi, Vice-Chancellor of the University of Cape Town, Professor Rana Daiani of Hashemite University, Jordan, and Dr Kathleen Aviso of De La Salle University in Manilla.

Addressing both achievements and barriers faced by women in science

In the coming months, SciDev.Net will be holding other such reader conference calls for free to explore the evolving news agenda in science and development.

In February’s call – hosted by Ruth Douglas, Deputy Editor for SciDev.Net’s global edition – Professor Phakeng, Professor Dajani and Dr Aviso took the opportunity to answer questions from readers on issues taking place in their region as well as the achievements and barriers faced by women in science.

Professor Phakeng is a highly regarded scientist with over 80 research papers and five edited volumes published. Her major awards include the 2016 Order of the Baobab (Silver) and in 2020 she was named in Forbes’ inaugural list of the 50 Most Powerful Women in Africa.

In July 2019, the University of Bristol conferred on her an Honorary Doctorate in Science in recognition of her leadership role in mathematics education in South Africa. She is the founder of the Adopt-a-learner foundation, a non-profit organisation that assists students from township and rural areas to acquire higher education qualifications.

Professor Dajani is professor of molecular cell biology at Hashemite University, Jordan, and is also a visiting professor at Yale and Cambridge universities. Her research area of expertise is epigenetics and biomarkers of trauma among refugees and across generations and she is a world expert on genetics of Circassian and Chechan populations in Jordan.

A member of UN Women Jordan’s advisory council and founder of the literacy programme We Love Reading, Professor Dajani has been ranked among the most influential women scientists in the Arab world.

Dr Aviso is dean of Gokongwei College of Engineering, De La Salle University, and her research interests include the development of support tools for environmental decision-making in areas such as eco-industrial parks and low-carbon energy systems. She is the author of more than 190 publications in peer-reviewed journals.

The difficulties that women face within the scientific field

In the discussion, Professor Phakeng explained that her greatest achievement was raising “three good men” – one an engineer, another an economist and another working in human anatomy. She also added that barriers in South Africa for marginalised groups in STEM careers go beyond the gender issue, also encompassing aspects of race.

In respect of women following careers in mathematics, she said that there is an impression that you need to be “superhuman” to succeed but that she believes this is not the case. She also highlighted that the journey for women in leadership is complex and that rarely are they able to take their children to conferences.

Dr Aviso explained that in the Philippines, gender equality issues are not as prevalent – stating that there have been two female presidents in the last decade. However, she added that there are difficulties and responsibilities that come with being a woman, such as being expected to do most of the housework. She also spoke about the importance of having a good female mentor and the role of the extended family as well as moves to make things more workable for women in the community.

Professor Dajani said that there are less women in business, law, politics or science but added that this is not unique to the Arab world. She said social scientists should seek to discover the reasons why there are more and more women in science and how structures of work created by men for men can be better understood and challenged.

She added that she believes women may prosper better in a learning environment where they are not judged by their gender – such as in a single sex school. Professor Dajani added that the stories of role models need to be told more – including those of men who have been supportive of women in their careers.

Ben Deighton, Managing Editor at SciDev.Net, said, “The monthly reader conference calls are an opportunity for the readers of SciDev.Net to engage in topical discussions on real issues facing key stakeholders in the scientific community – many of which our global team of correspondents report upon in our regular news coverage and analysis.

“We were delighted to have had such a distinguished panel of guests for this readers’ conference. It showcased the strength and depth of women in science across the Global South and their contributions to the field. It also served as encouragement for other girls and women looking to further their careers in science, technology, and engineering.”

Could chemistry improve the efficiency of perovskite solar panels?

A research team from the University of Surrey is utilising chemistry to make perovskite solar panels more efficient. How does ferrocene help in improving the...
Read more