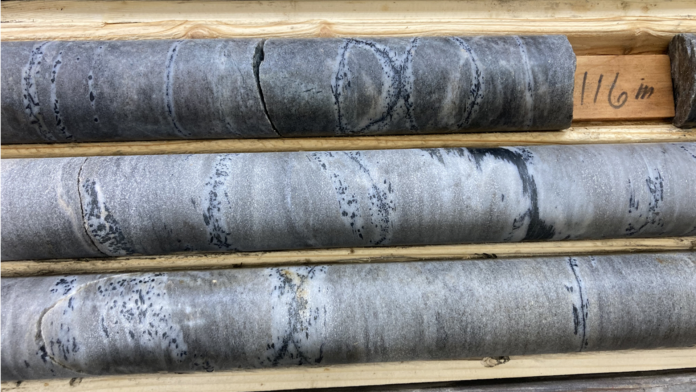 The Benton/Sokoman Alliance has confirmed the first lithium occurrence in Newfoundland, Canada, and continues to expand a new field of dyke swarms.

The Benton/Sokoman Alliance, initially formed by Benton Resources and Sokoman Minerals to explore gold deposits in Newfoundland, Canada, is now making progress in lithium exploration after discovering the presence of lithium-bearing pegmatite dykes. Discovery was just over a year ago and, since then, ground reconnaissance, limited soil sampling, and two diamond drilling campaigns have been completed. Results to date are highly encouraging and a new lithium district could be emerging.

The Newfoundland lithium occurrences exhibit all the characteristics of a known major lithium-rich corridor observed from Ireland to the Carolinas. There are key indicators (lithium-caesium-tantalum (LCT) geochemical signatures) that point to target areas with a high probability for the discovery of additional LCT-rich pegmatites.

Sokoman Minerals Corp. is a discovery-oriented company with projects in Newfoundland and Labrador, Canada, with primary activity focused on its portfolio of gold projects: the flagship, 100%-owned Moosehead, with Fosterville-style mineralisation, and the district-scale Fleur de Lys project that is targeting Dalradian-type orogenic gold mineralisation similar to the Curraghinalt and Cavanacaw deposits in Northern Ireland, and Cononish in Scotland.

In May 2021, Sokoman, together with Benton, formed the Benton/Sokoman Alliance (‘the Alliance’) – a 50/50 joint venture targeting district-scale gold opportunities in Newfoundland. The Alliance completed the acquisition of the Grey River Gold Project in southern Newfoundland; the Golden Hope joint venture in south-central Newfoundland, one of the largest gold properties on the island; and the Kepenkeck Project, located near the northeast extension of the Hermitage Flexure, the predominant geological feature of the south Newfoundland Appalachians. Heliborne High-Resolution Aeromagnetic & Matrix Digital VLF-EM Surveys were commenced on all three projects by July 2021.

An initial reconnaissance mission at the Golden Hope joint venture was intended to identify extensions of known gold-bearing structures, as well as any previously unrecognised structures on the property and to obtain samples in as many areas as possible. During this effort, field personnel discovered a swarm of lithium-bearing pegmatite dykes collecting three grab samples over a 110m width across the dykes. Two of the samples returned 1.95% Li2O and 0.49% Li2O, believed to be the first discovery of significant lithium mineralisation on the island of Newfoundland, although lithium occurrences in the Appalachian belt are well known.

Follow-up samples were quickly collected over a 1km2 area covering the swarm of poorly exposed pegmatite and aplite dykes. This sampling analysis has confirmed that:

The dominant lithium-bearing mineral has been identified as spodumene, which occurs as clusters of elongated prismatic crystals up to 5cm long in a grey-white matrix of glassy quartz and feldspar. Initial samples from the aplite dykes give highly anomalous caesium (17 ppm to 508 ppm Cs), rubidium (226 ppm to 1310 ppm Rb), and tantalum (5 ppm to 179 ppm Ta), typical of evolved pegmatite swarms.

The Alliance has also discovered several new pegmatites 200m-300m to the west-northwest and to the east and northeast of the main Kraken Pegmatite Field discovery area.

Early in 2022, the Alliance completed the Phase 1 diamond drilling programme, consisting of a 1,025m five-hole programme focused on a 100mx100m area in the vicinity of the initial discovery now known as the Kraken Pegmatite Field. Multiple mineralised spodumene-bearing dykes were intersected in all drill holes ranging from less than 1m to approximately 8m in drilled thickness, from surface to approximately 50m vertically below surface. Best results include an 8.4m section grading 0.95% Li2O. This represented the first drill programme directly targeting lithium mineralisation in the province of Newfoundland and Labrador, testing an extensive system of spodumene-bearing dykes sampled over a strike length of 2km within a corridor measuring 1,000m in width and open in all directions.

In May and June 2022, the Alliance constructed an exploration camp and mobilised an excavator and diamond drill rig to the project site. In this exploration phase, the Alliance has completed further mapping, prospecting, trenching, and a 3,073m, 18-hole, Phase 2 drill programme. The new drilling has targeted the East Dyke swarm, which is 600m-650m to the east of the Kraken Discovery Dyke, intersecting multiple spodumene-bearing pegmatite dykes, over core lengths of up to 27m, while also gaining a better understanding of the geological setting of the dykes for future targeting.

The Alliance reported several key discoveries from the 2022 exploration. Firstly, it reported the intersection of several new spodumene-rich pegmatite dykes, including the East Dyke with intersections, including a 25m-thick spodumene-rich dyke, that carry significant grades (5.50m at 1.16% Li2O) within a wider intersection of 20.82m averaging 0.60% Li2O from 46m downhole in drill hole GH-22-15. In addition, it reported multiple spodumene-bearing dykes trenched in bedrock in the follow-up of prospecting discoveries showing lithium mineralisation over a strike extent of more than 2km. Lithium soil geochemistry over areas of spodumene-bearing dykes outlines the mineralisation. A newly discovered cluster of spodumene-rich dykes 200m south of the East Dyke was trenched with samples assaying up to 1.12% Li2O. This area is still untested by drilling. Field prospecting data includes more than 30 float and bedrock sample occurrences with >1.00% Li2O over a > 2.20km strike length, which requires follow-up evaluation. Most have not been drill tested to date.

The Kraken Discovery Dyke and the East Dyke are approximately 600m apart and are wide open for expansion, with multiple untested surface dyke occurrences between them; the recently identified East Dyke South Area, Central Dyke Area, and Northeast Dyke Area.

Subsequent soil sampling along trend and to the north of the known zones has identified multiple, strong ‘lithium in soil’ anomalies now prioritised for prospecting, including a new discovery of a Lepidolite dyke, 12km northeast of Kraken, with tremendous potential between and along the granite-sediment contact. Given the effectiveness of geochemistry, the Alliance has launched an extensive and systematic lithium soil survey over the 60km-long favourable structural trend.

The most recent discovery is a caesium-rich dyke, located approximately 12km northeast of the Kraken lithium discovery, with surface grab samples assaying up to 1.56% Cs2O (caesium oxide), 0.4% Li2O (lithium oxide), 0.022% Ta2O5 (tantalum oxide), and 0.30% Rb2O (rubidium oxide). This is the first caesium mineralisation recorded in Newfoundland. The new dyke is approximately 5m-6m wide and has so far been traced for approximately 100m along strike.

Exploration is still in its infancy and the Alliance has control over a district-scale LCT-rich area along the prolific Appalachian-Caledonian Lithium Belt that extends from the UK to the eastern US. Included in the belt are the important deposits held by Piedmont Lithium Inc. in the Carolinas, US, as well as the Avalonia Project of International Lithium in a joint venture with GFL International Co. Ltd., a subsidiary of Ganfeng Lithium Co. Ltd. in the Caledonides of Ireland.

Future development potential is enhanced by the presence of important infrastructure proximal to the property. An all-season, paved highway is within 14km of the property, and a hydro substation is about 10km; electricity will be from hydroelectric non-emitting sources. Deep-water, ice-free ports for year-round ocean shipping are located on the southwest coast of Newfoundland 35km away, providing easy access to markets in the eastern US, and potentially European or other global destinations.

The project has moved quickly from an initial chance discovery through multiple phases of exploration and two rounds of diamond drilling. The Alliance is extremely pleased with the continued success on the 100% owned, 800 sq km Golden Hope Project and the new discovery of caesium along with lithium, tantalum, and rubidium in an area far removed from the original Kraken discovery. Given the results to date, the Alliance is confident of more discoveries along the 60km long structural trend hosting the Kraken and caesium-rich dykes.

A great deal of additional work is required including a significant diamond-drill programme to assess the identified lithium-bearing dykes, as well as to test the new caesium discovery targets. The ultimate potential of this project likely remains to be uncovered. An aggressive field programme is ongoing, including:

Benton and Sokoman, together with their legal and financial advisors, are considering the best approach to realising appropriate value for their shareholders from this developing project.