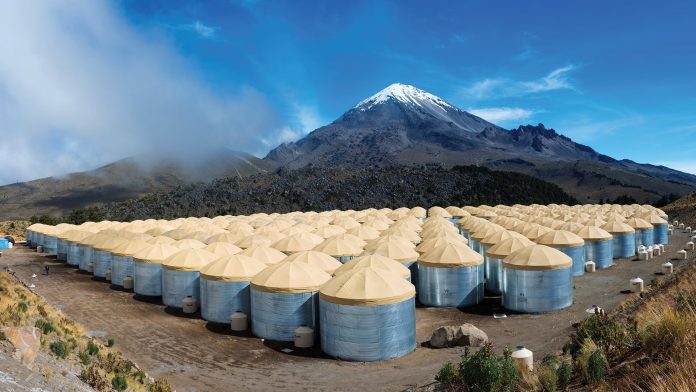 The University of Maryland’s Department of Physics explores the high-energy universe with the HAWC Gamma Ray Observatory.

One of the great mysteries of the last century has been the origin of the highest energy cosmic rays which hit the earth with energy more than a million times greater than that of the highest manmade beams at the CERN collider. Since the vast majority of these cosmic rays are charged particles, they are bent by the magnetic fields in the galaxy and, as a result, don’t point back to their origin. Very high-energy gamma rays trace where the highest energy particles are produced but are rare and, as such, require detectors with an enormous collecting area – much larger than can be built in space. So, to detect these gamma rays, ground-based detectors observe the cascades of particles called extensive air showers (EAS), produced when gamma rays hit the atmosphere.

HAWC: a unique telescope for the highest energy gamma rays

The High-Altitude Water Cherenkov (HAWC) Observatory is a unique telescope that is made mostly of water. It is located in the high mountains of Mexico, 4100m above sea level and inside the Parque Nacional Pico de Orizaba. Since its completion in March of 2015, HAWC is the world’s most sensitive wide field-of-view (FOV), continuously operating a high-energy EAS telescope. HAWC’s observations play an integral role in current and planned multi-wavelength and multi-messenger campaigns; the HAWC collaboration consists of ~140 scientists from ~30 institutions in USA, Mexico, and the EU.

What is HAWC and how does it work?

Cherenkov light is an electromagnetic shock wave produced when relativistic particles move faster than the speed of light in the medium in which they are traveling – similar to the sonic boom produced by an airplane exceeding the speed of sound. HAWC consists of an array of 300 large Water Cherenkov Detectors (WCDs) that each contain 188,000 litres (~50k gallons) of filtered water and four upward-facing photomultiplier tubes, which measure the blue flashes of Cherenkov light produced when EAS particles hit the water. By using the timing of the arrival of the shower front across the array (timed to sub-nanosecond precision), HAWC can reconstruct the direction of the primary particle to within 0.2˚. By using the pattern of light on the ground, HAWC can differentiate between gamma ray generated showers and showers generated by charged cosmic rays, which produce a nearly uniform background.

With HAWC, we are currently:

HAWC is issuing prompt notifications to other observers so that multi-wavelength and multi-messenger observations can be made.

HAWC observes gamma rays in the teraelectron volt (TeV – 1012eV) range, with sensitivity starting at ~0.5 TeV to well above 100 TeV. For comparison, the highest energy CERN beams are 7 TeV. HAWC measures the Cherenkov light produced in its water tanks by shower particles that reach the ground. This allows HAWC to operate 24hrs a day and to view nearly the entire overhead sky every day; HAWC has made the highest energy map of the galaxy to date.

The HAWC sky survey has provided a unique view of our galaxy; it has revealed more than 20 previously undetected sources and provided targets for follow-up observations by other gamma ray and neutrino detectors.

Observation of the microquasar SS 433

HAWC has recently observed TeV gamma ray emissions from SS 433, a galactic microquasar which is a binary system containing a supergiant star that is accreting matter onto a compact object. The system has jets extending from the compact object. Microquasars, such as SS 433, are valuable for studying jet physics, since they are believed to be scale models of the much larger and more powerful extragalactic jets observed in active galactic nuclei (AGN). The orientation of this object makes both jets visible from earth and its proximity makes it possible to resolve the source of emission (i.e. the central engine versus the jets). Previous gamma ray observations at lower energies of other microquasars have not been able resolve the source of emission. In SS 433, HAWC observes TeV emission coincident with the lobes of the jets, showing that electrons are actually accelerated within these jets or at their termination shocks.

One of the unique features of the HAWC is the ability to study extended objects. Of particular interest are nearby, middle-aged pulsars that could possibly alter the local environment and be the source of the anomalous positron excess at Earth, detected by space-based instruments. This excess has been cited as a possible signal of dark matter. Several of these pulsars were first detected by HAWC. By measuring the radial distribution and the energy spectrum of these objects, which extends above 40 TeV, HAWC showed that it is unlikely that the positrons from these sources are the origin of the positron excess – strengthening, but by no means proving, the case for dark matter as the origin of the positron excess.

HAWC provides daily unbiased monitoring of variable galactic sources as well as nearby AGN which are galaxies which have a super-massive (100 million solar mass) black hole at their center and relativistic jets perpendicular to the plane of the galaxy some of which are observed to be highly variable with flares on time-scales as short as minutes. HAWC provides alerts to the community when flares are observed so that other instruments can follow-up. In addition, HAWC’s high duty cycle and wide field of view gives it a unique ability to monitor the TeV sky for transients from unknown sources such as:

GRBs are some of the most energetic events in the Universe lasting for fractions of a second to hours; they are extragalactic in origin and occur without warning. An all-sky instrument like HAWC has an opportunity to observe this phenomenon at its onset and measure the highest energy gamma rays. So, in addition to searching for TeV counterparts to satellite-reported GRBs, we are using HAWC data to search independently for GRBs and notify the community of a significant detection within a few seconds.

The LIGO/Virgo collaboration announced the discovery of five high-confidence gravitational wave events – one was the merger of two neutron stars. This event was also detected by the Fermi satellite as a short GRB event and follow-ups by numerous multi-wavelength observers have identified an optical counterpart. This event was mostly outside HAWC’s FOV, so we obtained only limits, but in the future, we will continue to search for high-energy counterparts to LIGO/Virgo events.

Many current theories of the early universe predict the production of primordial black holes (PBHs); a black hole has a temperature inversely proportional to its mass and emits photon and particle radiation, which increases as its mass decreases. A PBH that formed with an initial mass of approximately a trillion kilograms in the early universe should be expiring today with a burst of high-energy particles, including gamma rays in the MeV to TeV energy range. HAWC is an ideal detector to look for PBHs.

At HAWC’s altitude, the footprint of showers induced by primary gamma rays – with energies above 10 TeV – is much larger than the detector area. When these high-energy showers fall off the array, we can easily detect them, but reliable direction and energy reconstruction is impossible without an accurate core location. To extend HAWC’s ability to reconstruct the highest energy events, we have just finished constructing an “outrigger array” of smaller WCDs around the main array. This will increase the area by ~4x, over which we can reliably reconstruct cores of showers with energies above 10 TeV.

The success of HAWC has led a group of scientists from around the world to begin planning for a new Southern Gamma-ray Survey Observatory (SGSO) – an EAS detector located at a high-altitude site in the mountains of South America. The goal would be to provide coverage of the southern sky with an even lower threshold and higher energy reach to complement the next generation of multi-messenger instruments.