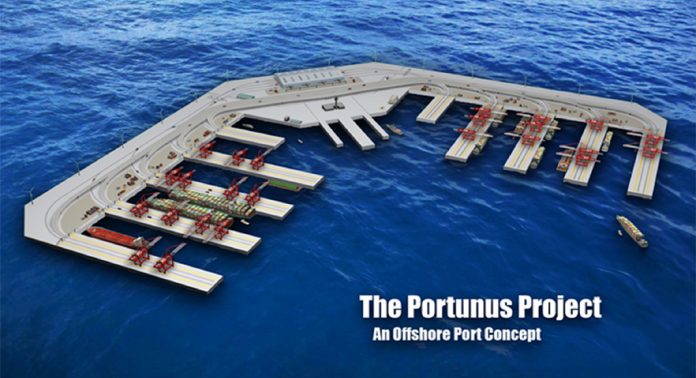 Franklin Martin, Vice President of European Operations at Float Incorporated spoke to The Innovation Platform about the developments of offshore ports and how they are gaining momentum as a greener, safer and overall, more efficient means of transporting cargo.

Shipping ports play a vital role in the transportation industry and have a significant impact on the wider economy. There are currently over 1,200 commercial seaports operating across Europe with a 50% increase in cargo handling expected by 2030. While this is a positive step in terms of economic growth and employment, it also brings with it increased levels of transport emissions, a greater threat to security and increased risk of port congestion.

What do you feel are the main challenges facing the European shipping sector today?

For the shipping industry, the absolute control of vessels’ movements including departures, sailing time, current position and destination arrival is highly necessary. The amount of cargo handled in EU ports is predicted to rise by 50% by 2030 and 80% by 2050 so Europe’s ports need to adapt in order to handle the increased amount of traffic. Furthermore, it’s important that the disparity between the performance of different European ports is addressed: Antwerp, Hamburg and Rotterdam are three of the best performing European ports and are responsible for one fifth of all goods arriving into Europe by sea. Performance gaps produce huge inefficiencies including longer routes, major traffic detours, longer sea and land trips, and ultimately increased transport emissions. If nothing is done problems like these will inevitably get worse as the industry continues to grow.

One such solution to the challenges outlined would be to adopt a similar system to that used for the commercial aircraft. The results of this could include the reduction of sailing time costs (for both owners and clients) through a more coordinated communications system; reduction of CO2 pollution caused by the tractor/trailer transhipment of twenty-foot equivalent units (TEUs) across Europe and the reduction of port call time and TEU delivery/departure to ease the current necessity to start/end “home port” sailing. For example, at present ULCC vessels transiting the English Channel lose an average of eight days (four-in and four-out) due to their size and weight and the reduction of speed authorised (10 knots ILO 23 knots sailing speed). ULCC vessels entering ports along their journey also lose time in waiting “their turn” or due to limited availability of vacant berthing pier(s). 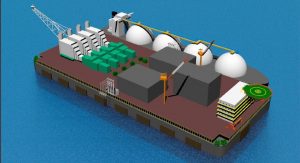 Can you describe your Float Europe Security Port and the specific benefits this has in the context of the aforementioned challenges?

Float Inc’s Offshore Floating Ocean Energy System (OFOES), configured as a centralised hub port – Security Port, provides the pivotal point for ULCC vessels, as well as short-sea shipping vessels, serving specific ports directly from the Security Port. The multi-use platform is designed to exploit the renewable resources of the oceans, providing renewable energy from wind and wave capture and conversion to grid electricity onboard. This revolutionary system accelerates the development of offshore markets and reduces the overall cost of ocean-energy exploitation.

As well as being a hub for different vessels, the OFOES can also benefit other potential users and industries. Other uses could include those related to aquaculture, fishing, desalination, LNG liquefaction and re-gasification and offshore Ro-Ro and/or container ports.

The uncertainty around current ports being able to accept ULCC vessels due to inappropriate berthing sizes and water depths would be diminished when vessels berth at the Security Port. This is thanks to exact navigation location information and data as well as the number of piers pre-selected for berthing (both for ULCC and short-sea shipping vessels) which are all accessible and without excessive restrictions such as water depths, pier length, etc.

The Security Port must be in constant contact with the vessel– similar to commercial aircraft identification and location/speed information – so the exact position of the vessel is known during its voyage, both to and from the Security Port. This would enable coordinated preparations for berthing and discharge/charge of ULCC vessels and identify the correct short-sea shipping vessels for its destination and container(s).

Additionally, the stable Security Port incorporates variable deck load capabilities and provides advanced notice for berthing position. As the berths are situated in mid ocean, near the general path of sailing, the berthing time is shorter and embarking/debarking containers is accomplished rapidly thanks to the inclusion of an automated crane and container transporter between ULCC vessels and awaiting short-sea shipping vessels on the opposite wing of the Security Port. Therefore, avoiding stacking and handling manoeuvres normally found at ashore ports.

The OFOES combines the PSP (Pneumatically Stabilized Platform) – including the PES (Potential Energy Storage) – and the Rho-Cee Wave Energy Converter system which captures and converts the wave energy into electricity via the Trident Energy power take-off system. The advantages of using this system include a lower installation cost, a reduction in the operation and maintenance required due to ease of access and reduced operating costs for customers due to the standalone power generation.

Multiple configurations are possible as the design of the Float Europe OFOES is determined by the application and based upon various data types to enable the appropriate configuration(s) for the candidate anchorage site. 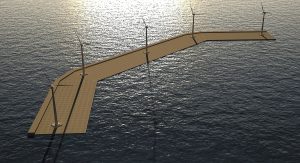 How does the Float Europe Security Port fit in with your other technologies (PSP, PES, and the Rho-Cee Wave Energy Converter, for instance)?

As a “first of its kind” combination, the Float Inc. Security Port is composed of the Pneumatically Stabilized Platform and Rho-Cee Wave Energy Converter and incorporates Potential Energy Storage capabilities, all within the same offshore floating platform.

The PSP (Pneumatically Stabilized Platform) is a patented design and constructed to enable a stable offshore floating platform to remain afloat under heavy sea states, as well as pre-calculated deck loads. PSP is also constructed of post constraint, reinforced concrete and built to last 70+years. The Rho-Cee Wave Energy Converter system is the means to capture and convert wave energy into electricity using the Trident Energy power takeoff, therefore providing grid quality electricity to the PSP/OFOES/ Security Port. The combination of the Rho-Cee WEC and PSP provides dampened sea states to the leeward side of the platform for improved ship docking. Furthermore, the Seawind 2-blade wind turbines are mounted on the forward (leading) edge of the PSP and provide additional grid quality electricity which is complementary to the Rho-Cee WEC as renewable energy products.

The PES (Potential Energy Storage) is obtained by utilising pre-determined PSP cylinder dimensions that are designed to receive and store electricity in the form of compressed air, resulting in a storage of compressed air that can be recuperated, heated and transformed into grid quality electricity.

Can you tell me about the Portunus project and what you hope this will achieve?

In May 2002, Float Inc. proposed a port security strategy entitled “Beyond the Horizon” and published a white paper which was distributed to most of the agencies that are involved in homeland security. Although the Department of Homeland Security was not yet established, the idea received a favourable response. The report caught the eye of Hank Glauser of the Lawrence Livermore National Laboratory (LLNL) who started to explore offshore ports and subsequently, with the help of the government and private industry reports concerning maritime security, terrorism, shipping and port efficiency, developed the Portunus project. In a presentation concerning the economic analyses of the offshore port concept Glauser said: “The ability to detect and direct any ocean contact to a safe location for inspection before it gets within striking distance of the U.S. is an important capability when faced with the rising threat that terrorism presents over the coming decades.”

Float Inc’s concept for a system of Offshore Security Ports has been adopted by the LLNL as a way to frustrate terrorist attacks via maritime traffic. Future U.S. ports could be located in the ocean, 20 to 40 miles from shore, under the proposed ‘Portunus project.’ The offshore port concept would allow cargo to be inspected far from the coastline therefore increasing homeland security.

Our first priority is the Security Port. We are currently waiting on approval by the European Union as it applies to all of Europe in terms of upgrading TEU shipping methods, as well as the positive impact on the reduction of CO2 pollution caused by TEU tractor-trailer transhipments. Our second priority concerns the Wind & Wave Ireland which entails the re-positioning of offshore wind and wave to the Rockall Trough. Finally, we are eager to work with the aquaculture industry regarding the implementation of our products worldwide in order to help provide healthy aquaculture products to worldwide clients.

The UK Government has announced it will provide £7m via the freight innovation fund (FIF) to reduce freight transport emissions.
Read more

Air travel emissions in Norway are double the global average

Discover how greenhouse gas emissions from Norwegian air travel are twice as high as the worldwide average and how they plan to combat them.
Read more