One Health approach: a symphony of effort … a health exigency worldwide

The One Health Initiative’s Dr Bruce Kaplan calls for a worldwide fully-fledged institutional implementation of the One Health approach as envisioned and embraced by many realistic visionary advocates.

“One Health is the collaborative efforts of multiple disciplines working locally, nationally, and globally to attain optimal health for people, animals, plants and our environment.”

“One Health implementation will help protect and/or save untold millions of lives in our generation and for those to come.”

“Between animal and human medicine there are no dividing lines – nor should there be. The object is different but the experience obtained constitutes the basis of all medicine.”

The Innovation News Network published a brief summary of the ‘One Health’ status in Issue 5, this year (March 2021) entitled ‘Fighting COVID-19 with a One Health approach’. It presented a cogent argument for now being the time for a One Health approach to combat both COVID-19 and any future pandemics.

A powerful incentive for finally putting the One Health concept/approach—front and centre—on the global public health map came when there was a seismic shift by the G7 in recognising one health as critical to everyone’s health on 13 June 2021! This was closely followed by the United Nations Association of the National Capital Area (Washington, D.C., USA) recognising the criticality of the issue by reprinting the news item in their newsletter.

Is it too late internationally for life protecting, lifesaving ‘one medicine-one health’ implementation? Yes, for many already ill, the suffering, and/or the dead, it is too late. At least, as a moral issue, the world’s communities could and should immediately begin a world-wide fully-fledged institutional implementation of the One Health approach (OHI) as envisioned and embraced by many realistic visionary advocates particularly in the 20th and early 21st centuries.

Proponents now include the likes of the World Health Organization, the Food and Agricultural Organization of the United Nations, the Federation of European Microbiological Societies, the U.S. Centers for Disease Control and Prevention, the U.S. Food and Drug Administration, the U.S. Department of Agriculture, the American Association of Public Health Physicians, the American Veterinary Medical Association, the One Health Commission, the EcoHealth Alliance, the One Health Network South Asia, the Indo-Pacific Centre for Health Security, a programme for The Task Force for Global Health and world famous public health/scientific leaders with impeccable credentials like USAID-NIH’s Dr Anthony S. Fauci et. al. and other historic notables in the past. 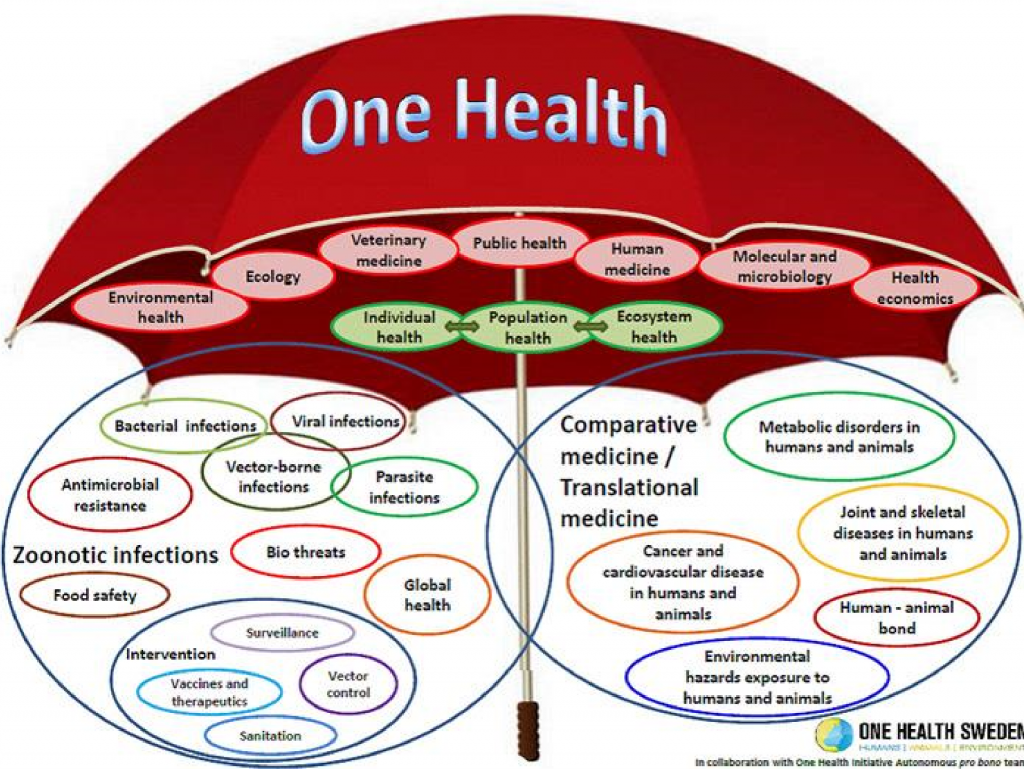 It takes teamwork to win the game

Indeed Fauci strongly endorsed One Health in 2018. And it does not stop at the doorstep of recognised clinical health and public health experts. Intellectually thoughtful, well educated, prominent professional individuals from other disciplines have zeroed in on the facts and discovered truth. To succeed, we all need to see things as they are, not as we want them to be in science, government, politics, journalism, the law, and elsewhere. A sports metaphor comes to mind: in soccer, American football, basketball, or baseball, ‘it takes teamwork to win the game’.

To some extent, One Medicine-One Health (commonly called ‘One Health’) implementation has gained a worldwide foothold, i.e. becoming acknowledged during this last decade, especially in the last few years. Worthy of note is a recognised late 20th century jump-starting endeavour like that for heart disease requiring coronary artery stents (herein is a letter to the One Health Initiative team from the principle scientific cardiology research investigator, a veterinarian-physician).

Global public health threats and remedies such as smallpox eradication have been documented – its illustrious leader, Dr D.A. Henderson endorsed ‘One Health’. One Health implementation would do the same for many other global public health strategies and tactics. How do we know? There are countless paragons, paradigms, exemplars, models, illustrations, cases, esoteric academic studies, and so on, in addition, human to animal disease transmission observational reports of Tuberculosis and other zooanthroponoses (as opposed to zoonoses) have been verified. Notably one of the co-authors of the previous article highlighting humans transmitting diseases to animals, Dr Gregory C. Gray is an OHI Advisory Board physician member and prolific One Health advocate-creator. Gray established the first ‘One Health’ PhD programme at the University of Florida (USA) and is currently leading Duke University‘s international One Health programme.

In March 2008, Kahn et. al. published a short roadmap style article in The Journal of American Medicine entitled ‘Teaching One Medicine, One Health’. Since then, several excellent high profile international and national One Health programmes have evolved for children and adults. A remarkable online One Health course was offered worldwide online. Numerous public colleges/universities offer One Health degree programmes. Another extraordinary international One Health educational project, published in the South Eastern European Journal of Public Health (SEEJPH) and led by One Health Initiative Advisory Board member, Dr George Lueddeke, is called 1HOPE. Lueddeke’s One Health work was recognised earlier in 2019 by an interview – ‘Survival: One Health, One Planet, One Future’ – Routledge, 1st edition, 2019 – PEAH – Policies for Equitable Access to Health with physician, Daniele Dionisio, MD.

To inculcate appreciation, One Health educational indoctrination must be instituted in grade school, high school, and college curricula. A recent notable example was the One Health programme by the Faculty of Science, the Schulich School of Medicine & Dentistry of London, Ontario, Canada, and the Department of Pathology and Laboratory Medicine (One Health) brought their expertise together to develop and officially launch the undergraduate One Health Major in the fall of 2021. Students will be required to complete the One Health Major in combination with another Major in an Honours Bachelor Degree (Double Major). In addition, schools of human medicine, veterinary medicine, and public health essentially need appropriate curricula instructional exposure. This would further advance recognition and implementation.

As early as 2012, the U.S. National League of Cities adopted a One Health resolution at their 2011 Congress of Cities meeting. While a momentous start, no concrete legislation evolved therefrom.

In April 2020, legislators and others urged ‘Swift Passage…’. The legislation was re-introduced in March 2021, while hope springs eternal, it continues to remain in limbo to date.

One Health advocacy giants have foreseen, past and present, how melding and pooling knowledge (together) from a conglomerate of transdisciplinary collaborative resources in similar and diverse fields have literally ignited successful health care enterprise/research crucibles. Wrap your mind around the tip of that evidentiary iceberg chain and fathom the colossal potential with having fully-fledged specific performance implementation(s):

‘Comparative medical/surgical research efforts’ i.e. utilising an interdisciplinary collaborative One Health approach have been documented repeatedly showing important examples of One Health research advances from 2009 to 2012.

The bottom line is that One Health needs to be institutionalised and imbedded into the discerning philosophy of human society ex post facto! Zealotry on behalf of One Health principles is a virtue. 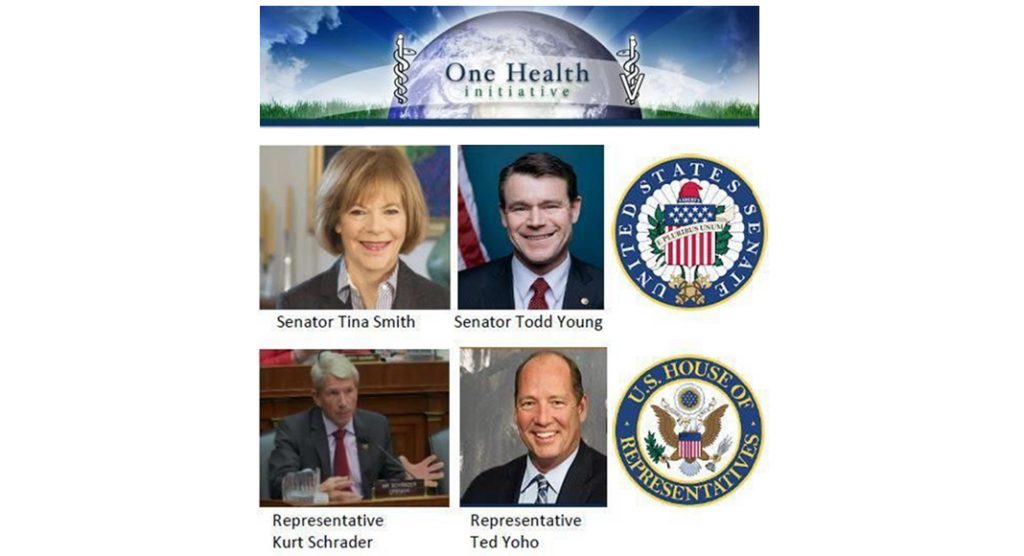 Understanding the dangers presented by the SARS-CoV2 Delta variant

A new study has indicated that the combination of computer vision and Artificial Intelligence (AI) may enhance IVF treatment.
Read more

Analysing the effects of long-period space flight on cardiac atrophy

Researchers from King Abdullah University of Science and Technology (KAUST) have developed a procedure involving high-intensity pulses of light that can successfully remove carbon...
Read more

Scientists discover a use for biotechnology in order to provide an alternative to egg white protein production that is more environmentally sustainable. Research by the...
Read more