Fighting COVID-19 with the One Health Initiative

The One Health Initiative’s Dr Bruce Kaplan argues that it is now time for a One Health approach to combat both COVID-19 and any future pandemics.

The COVID-19 pandemic, caused by severe acute respiratory syndrome coronavirus 2 (SARS-CoV-2), is a crisis today that is only the beginning. The ‘writing is on the wall’: other viruses of animal origin are just around the corner. The USA and wider world were not prepared for this devastating zoonotic disease, which is believed to have been spawned in bats. And while diseases transmitted from animals to humans have been being addressed by biomedical research scientists for many years now, we now need a prompt realisation and recognition of the critical need to finally institutionalise the interdisciplinary/transdisciplinary (minus the superiority of the egoistic traditionalists of the past) One Health concept/approach, before other potentially worse culprits emerge, such as Nipah virus with a 40-75% mortality rate!

The concept of developing efficacious vaccines against zoonoses is already here, as has been demonstrated by the fast-forwarding of COVID-19 immunisation products from the biopharma companies Pfizer, Moderna, and AstraZeneca, with others in the pipeline.

In June 2007, the American Medical Association Meeting (AMA) witnessed the ‘One Health’ resolution testimony. This historic resolution was subsequently adopted. The AMA ‘One Health’ resolution was originally drafted by Kahn under Davis’s guidance. Thomas P Monath, MD, and Bruce Kaplan, DVM assisted. The historic ‘One Health liaison between the American Veterinary Medical Association (AVMA) and the AMA (which is in effect today) was primarily fostered by collaboration between Mahr and Davis.

The One Health concept has been around for centuries, but has clearly been under-utilised. It has proven to be highly successful when employed, however, as has been documented by reputable websites in the USA and internationally during the early 21st century. The U.S. Centers for Disease Control and Prevention has a division dedicated solely to engaging the One Health approach.

Nearly all health-related issues fall under the ‘One Health Umbrella’. To gain an important perspective: several significant historic inspirations for advancing the One Medicine/One Health concept and movement in the 19th, 20th, and 21st centuries have included the likes of physician D A Henderson, MD, MPH, recognised leader of the worldwide smallpox eradication programme, and veterinarian James H Steele, DVM, MPH, who established the veterinary division at the ‘Communicable Disease Center’, now known as the U.S. Centers for Disease Control and Prevention (CDC), in 1947.

Steele continued his extraordinary global public health and One Health leadership endeavours through the first decade of the 21st century and three years into the second. In addition, he established the American Veterinary Epidemiology Society (AVES) to help ‘improve the quality of life for all people and animals through the science-based One Health principles.’ 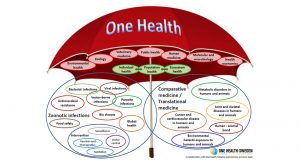 Institutionalising and expanding the One Health approach

Others catapulted the recognition of the dynamic life protecting/saving power that could be unleashed by institutionalising and expanding the One Health approach in 2007. They include the late physician Ronald M Davis, MD, MPH, the One Health leader who fostered the official adoption of the American Medical Association’s historic ‘One Health’ resolution. Davis collaborated with then American Veterinary Medical Association president, veterinarian Roger Mahr, DVM and physician co-founder of the One Health Initiative team Laura H Kahn, MD, MPH, MPP.

Make no mistake, tribalism and the desire to become the foremost ‘One Medicine – One Health – One World’ front-runner is, and has been for some time, in the mix. Nonetheless, to everyone’s honour, all players have helped the concept grow exponentially during the early 21st century.

Several exceptional high-profile One Health organisations including EcoHealth Alliance and One Health Institute UC Davis, along with lesser known ones such as One Health – Africa CDC, AFROHUN-ADVANCING ONE HEALTH and New One Health Global Leaders Group on Anti-Microbial Resistance launched by WHO, FAO and OIE have become, or are becoming, significant major contributors.

And this is not to mention the many potential One Health enrichments towards clinical health research advances, e.g. heart disease and cancer. This is only the tip of the iceberg, and much more is yet to be uncovered and discovered.

So, what are we waiting for? Another horrendous pandemic?

The successes and challenges of the regenerative medicine sector

Stephen Majors of the Alliance for Regenerative Medicine discusses the successes of the sector, and explains how practices learnt during the COVID-19 pandemic could...
Read more

CERN’s CARA tool has uncovered valuable data on how viral infection such as COVID-19 is able to spread in indoor settings. CERN experts have produced...
Read more

The NCSC’s 2021 Annual Review emphasises the work undertaken by the organisation to safeguard the UK from cybersecurity incidents over the last year. According to...
Read more