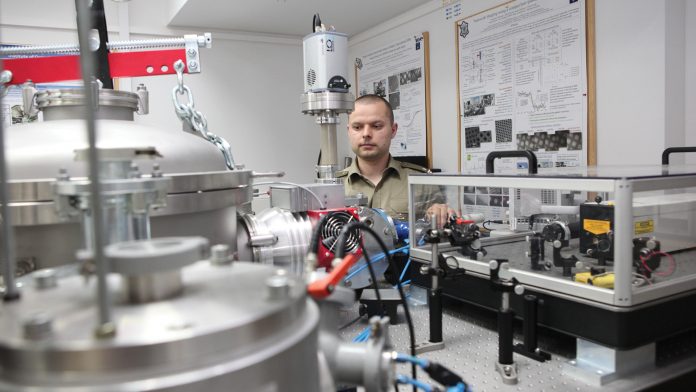 The Institute of Optoelectronics aims to support research and education in laser, optoelectronic and biophotonic technologies, with laser technology and modern applications at the heart of the institute.

The Institute of Optoelectronics (IOE) is an interdisciplinary academic institute at the Military University of Technology. IOE’s mission is to support research and education in laser, optoelectronic and biophotonic technologies. The institute’s research activities fall into many areas, including: defence, security, critical infrastructure protection, environmental protection/monitoring, metrology, and medicine. The main lines of research undertaken by the IOE are associated directly with the needs of the army, the national economy, medicine, and environmental protection. Nevertheless, at the heart of the institute is laser technology and its modern applications.

Some of the basic areas of research at the IOE include:

• New types of lasers and laser active centres
• The use of lasers in the military and civilian equipment
• Detection of laser radiation and its interaction with matter
Moreover, a second important direction of work in the field of optoelectronics concerns infrared and thermal imaging and the use of optoelectronic elements in security systems.

In addition to research projects funded through the EU Framework Programmes and EDA, the IOE is involved in the Pervasive and UseR-Focused BiomeTrics bordEr projeCT (PROTECT). The goal of the project is an enhanced biometric-based person identification system that works robustly across a range of border crossing types which have strong user-centric features.

The system will support border guards to facilitate the smooth and non-intrusive rapid crossing by travellers based on the deployment of the next generation of biometric identification and detection methods. The ability for the system to efficiently process low-risk travellers, combined with increased levels of accuracy, security and privacy standards and enabling border guards to concentrate their resources on higher-risk travellers, are central ambitions of the project.

To achieve these goals, a multi-biometric enrolment and verification system is envisaged, taking into account current and next-generation e-Passport chips, mobile equipment and person identification ‘on the move’. Research will be undertaken into the optimisation of currently-deployed biometric modalities, application of emerging biometrics (including contactless finger vein, speaker recognition, and anthropometrics), multi-modal biometrics, and counter-spoofing for border control scenarios.

Another programme concerning airport and border security is the robusT Risk-basEd Screening and alert System for PASSengers and luggage (TRESSPASS).The overall scope of this system is to modernise the way security checks at border crossing points (BCPs) are conducted. TRESSPASS imports the idea of ‘risk-based’ security checks and proposes an analytic framework for modelling risk as well as a systematic approach to quantifying risk based on a set of indicators that can accurately be measured across all four tiers of the Integrated Border Management.

Once these indicators are accurately estimated from data collected from background information, sensors, and applications, the risk for each traveller is reliably calculated, based on the TRESSPASS four-tier risk management approach. Based on this risk, the system then adjusts the number and types of security checks required for each traveller, congruent with the associated risk, in order to maintain a desired security level whilst still optimising security. Extensive simulations will be used to first test the proposed approach before implementing and validating it in three different pilots covering all three modalities: land, maritime, and air.

There is also the Predicative methodologY for TecHnoIogy Intelligence Analysis (PYTHIA) Project. This aims to devise an innovative methodology for strategic technology foresight and is able to deliver frequent ‘predictions’ on technology-related matters, including the discovery of major trends in a particular area of research and development.

The D4FLY project will increase the current capabilities and capacities of border authorities in countering emerging threats in document and identity verification (such as forged documents, impostor fraud, morphed faces) at manual and highly automated border control points and in the issuance process of genuine documents.

The confluence of D4FLY’s set of tools and systems will improve the quality of verification and reduce major time sinks in the processes, thereby enabling a real on-the-move border crossing experience for travellers. Novel sensor hardware based on advanced light field cameras and novel algorithms developed in the project will enhance verification accuracy and robustness via the combined usage of 2D+thermal face, 3D face, iris and somatotype biometrics.

D4FLY will create a resilient document verification system that can verify a multitude of physical and electronic security features, detect complex forms of electronic fraud and advanced morphing, and identify fraud in breeder documents. The solution will consist of a border control kiosk geared with enhanced enrolment, verification, and detection capabilities, smartphones applications for improved performance and verification capabilities, and a non-stop on-the-move system for biometric verification.

CREST – Fighting Crime and TerroRism with an IoT-enabled Autonomous Platform. This is based on an Ecosystem of Advanced IntelligEnce, Operations, and InveStigation Technologies.

CREST aims to equip law enforcement agencies (LEAs) with an advanced prediction, prevention, operation, and investigation platform by leveraging the IoT ecosystem, autonomous systems, and targeted technologies and building upon the concept of multidimensional integration and correlation of heterogeneous multimodal data streams (ranging from online content to IoT-enabled sensors) for:

• Threat detection and assessment
• Dynamic mission planning and adaptive navigation for improved surveillance based on autonomous systems
• distributed command and control of law enforcement missions
• Sharing of information and exchange of digital evidence based on blockchain
• Delivery of pertinent information to different stakeholders in an interactive manner tailored to their needs.
•CREST will be validated in field tests and demonstrations in three operational uses cases:
• Protection of public figures in motorcades and public spaces
• Counter terrorism security in crowded areas
• Cross-border fight against organised crime (e.g. firearms trafficking).

In CREST, WAT will provide a multispectral system for concealed objects detection.

For over a decade, the Institute of Optoelectronics MUT has been participating in the Laserlab-Europe project. This network consists of 33 institutions from 16 European countries that are beneficiaries of the project. In total, 49 European research centers participate in the project, in which research is conducted in the field of pulsed high-power lasers and their applications.

IOE participates in the JRAs on the development of new laser-based instruments and technologies (LEPP) and their use in biomedicine (BIOAPP). Unique laser plasma sources of soft X-rays and extreme ultraviolet for application in the nanoimaging of biological objects and the modification of biomaterials have been developed and used.

The field of laser physics is moving ahead: Extreme Light Infrastructure

The Extreme Light Infrastructure (ELI) project concerns large research infrastructures implemented in three countries: the Czech Republic, Hungary, and Romania. The infrastructure consists of high-power pulsed laser systems designed to study the interaction of laser pulses with matter at an extremely high, so far unachievable, intensity above 1023 Wcm-2. Such a high intensity of radiation will be obtained by generating pulses with ultra-short duration (below 10 fs) with energy in the pulse above 10 kJ. This will allow the study of matter subjected to very strong fields and the dynamics of processes occurring in the attosecond time scale.

Research programmes are different for individual ELI infrastructures. For example, the research programme for the ELI-Beamlines infrastructure in the Czech Republic concerns the laser production of secondary electromagnetic radiation in the short-wave spectrum region and beams of charged particles.

The goal of this programme is to develop a new type of coherent X-ray source and laser accelerator of high energy charged particles. Whereas, the research programme for the ELI-ALPS infrastructure in Hungary concerns the production of ultra-short pulses of radiation in the attosecond range and shorter. The aim of the programme is to develop sources of such radiation and their application in studying the dynamics of ultrafast processes. However, different again, the research programme for the ELI-NP infrastructure in Romania concerns the use of high-power pulse lasers with nuclear physics, with the aim to develop a new type of pulsed γ-radiation source based on Compton’s scattering of the laser beam on high-energy electrons.