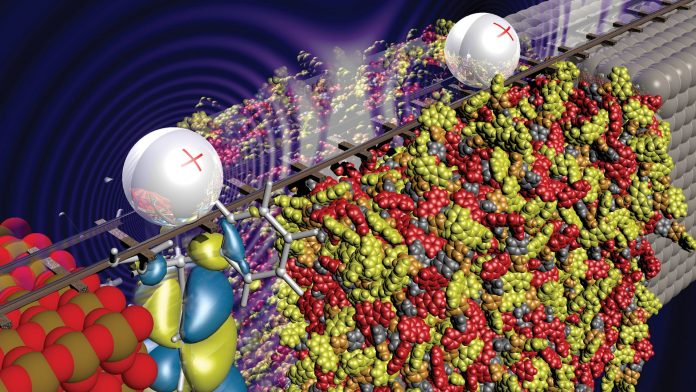 Dr Denis Andrienko, from the Max Planck Institute for Polymer Research, speaks to Innovation News Network about organic electronics, including a discussion of his work on blue phosphorescent materials.

A group leader in the theory group at the Max Planck Institute for Polymer Research, Dr Denis Andrienko works on bridging the computer simulation techniques which are used to study the structure and properties of materials, with a special focus on organic electronics. To do this, he and his colleagues developed a software toolkit tailored for the design of organic semiconducting materials, which is open to public and can be downloaded from the website www.votca.org.

Here, Andrienko speaks to Innovation News Network about organic electronics, including a discussion of his work on blue phosphorescent and thermally activated delayed fluorescence (TADF) materials.

How would you characterise the field of organic electronics? Would you say there is enough collaboration and co-operation between disciplines and, indeed, between academia and industry?

At our institute, we have a large department working on organic superconducting devices (headed up by Professor Paul Blom) and theoretical activity, which I lead (my group is a part of the Theory Department, headed by Professor Kurt Kremer).

When it comes to OLEDs, what would you say are now the biggest research challenges moving forwards? Is there enough of a focus on basic research/fundamental properties in order to provide the basis for future applications?

In the OLED industry, the biggest challenge now is the blue (high-excitation energy) colour. There is no commercially available solution for a stable and efficient blue pixel at the moment. There are a few concepts which are being explored by different companies, such as UDC (a USA-based company), which is working on phosphorescent concepts, and CYNORA (which is now in the consortium), which is developing TADF emitters.

Conceptually, harvesting excited triplet states boosts OLED efficiency, whereas reducing the lifetime of excited states decreases the probability of degradation reactions. In practice, one has to find a compromise: phosphorescent emitters, developed by UDC, do harvest triplet states but have large excited state lifetimes. A different approach is to design fluorescent emitters capable of harvesting triplet excitons. Small singlet-triplet splitting of these emitters facilitates efficient (reverse) intersystem crossing, (R)ISC, from the triplet to the singlet state, leading to thermally activated delayed fluorescence (TADF, developed by Cynora). Excited state lifetimes of TADF and phosphorescent emitters are, however, of the same order of magnitude, resulting in similarly fast operational degradation.

Stability and colour purity of TADF OLEDs can be improved by combining TADF emitters with conventional fluorescent emitters in a sensitising approach [Furukawa, T, Nakanotani, H, Inoue, M & Adachi, C Sci. Rep. 5, 8429 (2015)]. In such a hyperfluorescent TADF OLED, an efficient Förster resonance energy transfer (FRET) from the singlet excited TADF state to a singlet of the fluorescent emitter reduces the number of RISC/ISC cycles prior to radiative decay. The radiative decay time is, however, still limited by the rate of the RISC process: due to spin statistics, 75% of excited states need to be transferred to singlet states prior to FRET or fluorescence. The slow decay rate of the delayed emission, ultimately, limits the stability of hyperfluorescent TADF OLEDs.

An alternative to TADF, which also surpasses the 5-7% theoretical limit for the external quantum efficiency of fluorescent OLEDs, is the phosphor-sensitised fluorescence approach. Generally speaking, FRET from a triplet to a singlet state is spin-forbidden and hence inefficient. Long lifetime of the excited phosphorescent triplet state and a high photoluminescence quantum yield can, however, compensate for the slow FRET rate. In principle, all excited states can be directly transferred to the fluorescent acceptor via FRET. Direct transfer results in shorter radiative decay times than TADF hyperfluorescence.

Conceptually, the phosphor-sensitised fluorescence approach can also be used to improve the stability of a unicoloured OLED, but so far, a number of practical design challenges prevented its realization.

Our work mainly concerns the computational design of organic materials for OLEDs and OPVs. We are screening and optimising hosts and emitters of phosphorescent OLEDs. The biggest challenge is, of course, to predict relevant properties of OLEDs (current-voltage characteristics, luminance, and degradation dynamics) from first principles, i.e. using only information about chemical structures and no fitting parameters. This is a complicated multiscale problem which requires a very broad range of methodological development.

On the application side, together with our experimental colleagues in the InnovationLab and BASF, we have proposed a new concept of improving OLED lifetime by using unicoloured hyperphosphorescence. In this concept, the lifetime of triplet excitons is effectively reduced by transferring energy to single excited states of a fluorescent emitter. This improves both the efficiency and lifetime of the OLED.

Moving forwards, where will your research priorities lie? Do you have any hopes for Horizon Europe (FP9 – the ninth framework programme) or other sources of funding?

Our research priorities include a continued focus on quantitative descriptions of excited states and their applications in solar cells with alternative acceptors (in a collaborative project with KAUST, Saudi Arabia), and we will also start working on artificial photosynthesis.

One of our recent follow-up proposals to the FP9 call was unfortunately rejected, in spite of a very strong industrial interest in the topic. My personal opinion is that an average success rate of 4% makes it increasingly difficult to rely on the EU source of funding for solving challenging long-term problems. This type of funding, however, opens up an opportunity to learn new academic and industrial partners, and thus stipulates new ideas and solutions which can then be developed by using the base-line funding of universities, institutes, or industries.

D.A. thanks to the European Union Horizon2020 research and innovation programme ‘Widening materials models’ under Grant Agreement No. 646259 (MOSTOPHOS).

This project has received funding from the European Union’s Horizon 2020 research and innovation programme under Grant Agreement No. 646259.