Exploring the pros and cons of nuclear energy

Researchers at the University of Oklahoma’s Institute for Public Policy Research and Analysis discuss evolving public perspectives on the future of nuclear energy in the US.

The combined threats posed by global energy insecurity and a warming climate elevate the urgency of shifting to secure, stable, low-carbon energy sources. Pathways forward emphasise the need to complement renewable sources with nuclear energy. 1,2 The option of continued (or increased) reliance on nuclear energy as a part of the overall energy mix must address significant regulatory and social challenges. Despite the promise of advanced nuclear technologies, many current reactors in the US and EU are nearing the end of their licensed lifespans, and potent opposition to siting new reactors remains among wide segments of the public in the US and Europe. However, public views are dynamic, not static, and there are competing factors at play that push and pull public support for nuclear energy.3 The lingering negative impacts of events like Fukushima on public perceptions of nuclear risks, the as yet unresolved disposition of spent nuclear fuel from prior energy generation, and substantial distrust in our governing institutions all pose formidable obstacles to continued and increased reliance on nuclear energy. If these factors dominate, communities might choose to bypass nuclear energy while focusing exclusively on renewable sources like wind and solar energy. On the other hand, increasing global energy insecurities, rising natural gas prices, and challenges posed by global climate change all highlight the urgent need for stable, secure, and emission-free energy sources – all of which provide strong reasons for supporting a nuclear resurgence.

Where do things stand? In this article, we focus on how US citizens view the risks and benefits of nuclear energy, and how these factors influence support for continued reliance on nuclear energy. What role can advanced nuclear technologies play? We have built a unique dataset consisting of census-balanced yearly surveys of the US public on issues of energy and the environment. Our surveys were initiated in 2006 and undertaken yearly, covering broad topics about energy use and the environment, as well as specific topics related to the front and back end of the nuclear fuel cycle. We completed the most recent survey in the series in July 2022.

The long-term trend indicates that public support for traditional nuclear energy technology was relatively high from 2006 to 2010 but fell significantly after the 2011 Tohoku earthquake and the subsequent Fukushima Daiichi nuclear power plant accident in Japan. During the pre-Fukushima accident era, more than 50% of our US survey respondents with an opinion supported the construction of new nuclear reactors both at existing (new reactors) and new locations (new plants).* Support tumbled following the accident, settling below 50% and remaining at those levels for nearly a decade. Survey data from the last two years (2021-2022) suggest a gradual uptick in US support for nuclear energy. For the first time in ten years, more than 50% of survey respondents indicated support for building new reactors and new nuclear plants in the US.

Support for traditional nuclear energy may be on the rise, but the US public is even more intrigued by the promise of advanced nuclear technologies. For example, using data collected since 2018, our surveys indicate that 60-75% of US residents would support the use of small modular reactors (new SMRs) to generate electricity in the US.

What explains these dynamics? Research on public opinion consistently shows that individuals draw on risk and benefit perceptions when formulating opinions about nuclear energy.4,5,6,7 As one might expect, people who believe that nuclear energy is dangerous (high risk) and unnecessary (low benefit) generally oppose it, whereas people who believe that it is safe and valuable are supportive. These categories seem easy to imagine, but most US residents fall somewhere in between. In our latest survey (June/July 2022), 53% of respondents said the risks and benefits of nuclear are high. By comparison, 20% rated the risks as low and benefits as high, 10% were in the high-risk low-benefit camp, and only 5% said that the risks and benefits were low. The remaining 12% of respondents were somewhere in the middle, often at the very centre, indicating uncertainty in risk and benefit perceptions. 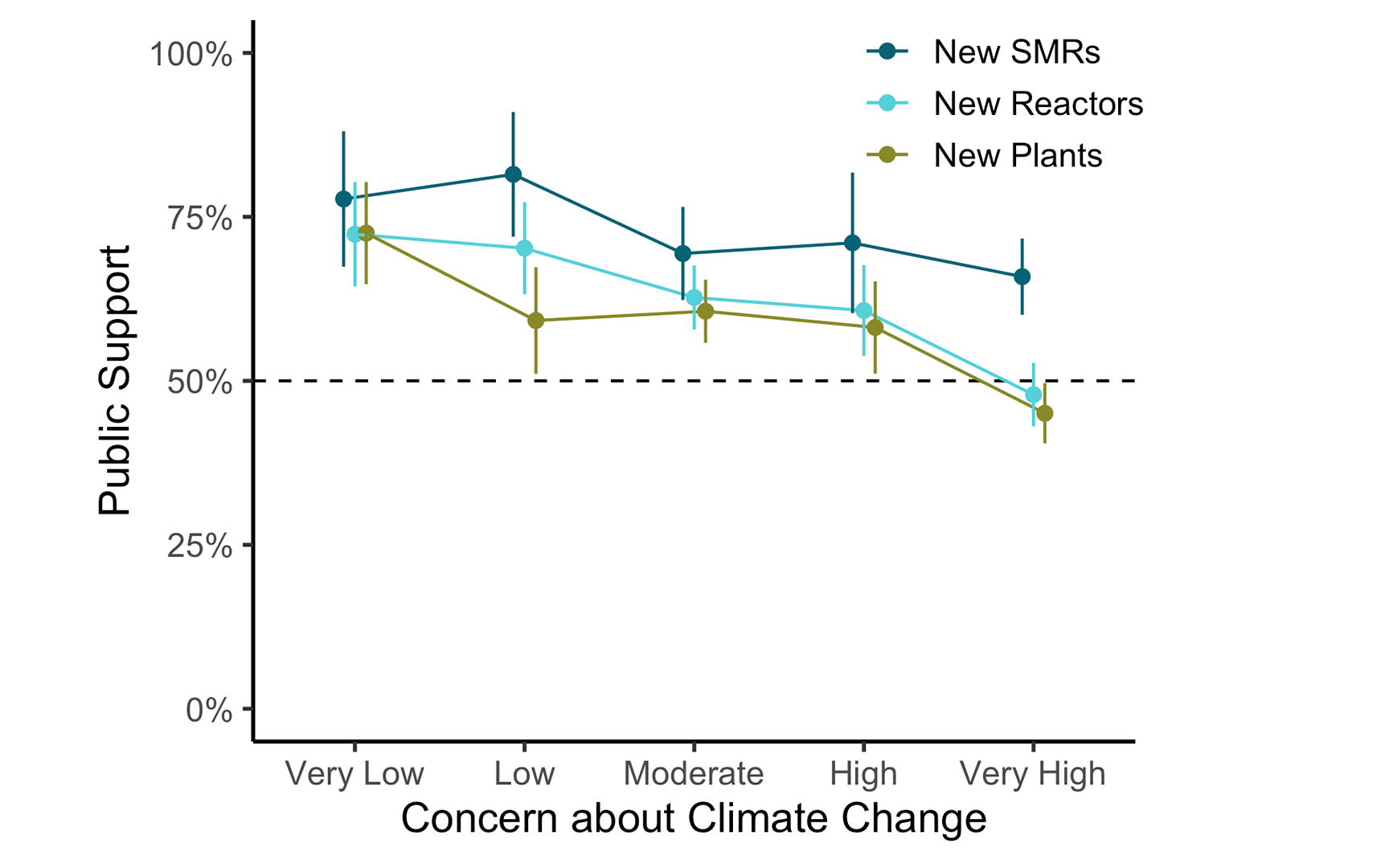 In aggregate, the distribution of nuclear risk and benefit perceptions in the US supports an uncertain view about nuclear energy. To most people, both the risks and benefits of nuclear energy are significant, and this can make it difficult to formulate a strong and consistent opinion about these energy technologies. While overall calculations may be cloudy, there is more clarity about the nature of the risks and benefits that are perceived to be most important.

In statistical models that use the survey data to predict support/opposition, two kinds of risks rise to the top of the list as the most significant in explaining overall nuclear support and opposition. The first and most important is concern about the possibility of an accident that results in the release of large amounts of radiation. Next – and almost as important – is concern about the possibility of an accident during transportation or temporary storage of spent nuclear fuel. Concern about the risks posed by diversion of spent fuel for the manufacture of nuclear weapons (a key concern for non-proliferation of nuclear weapons) or a radiation release due to terrorist attacks on nuclear power plants is less predictive of support or opposition for nuclear energy. 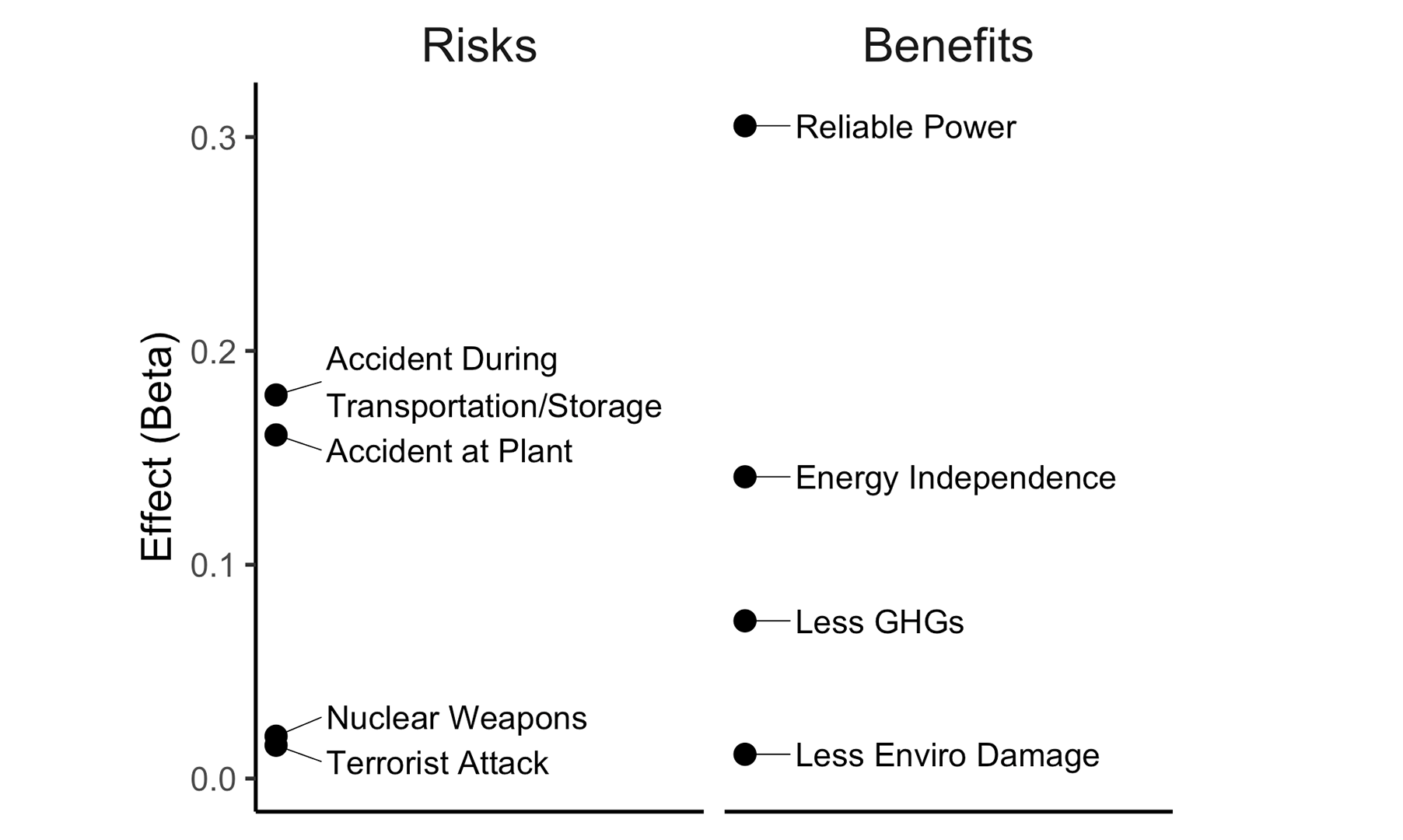 Nuclear energy and the environment 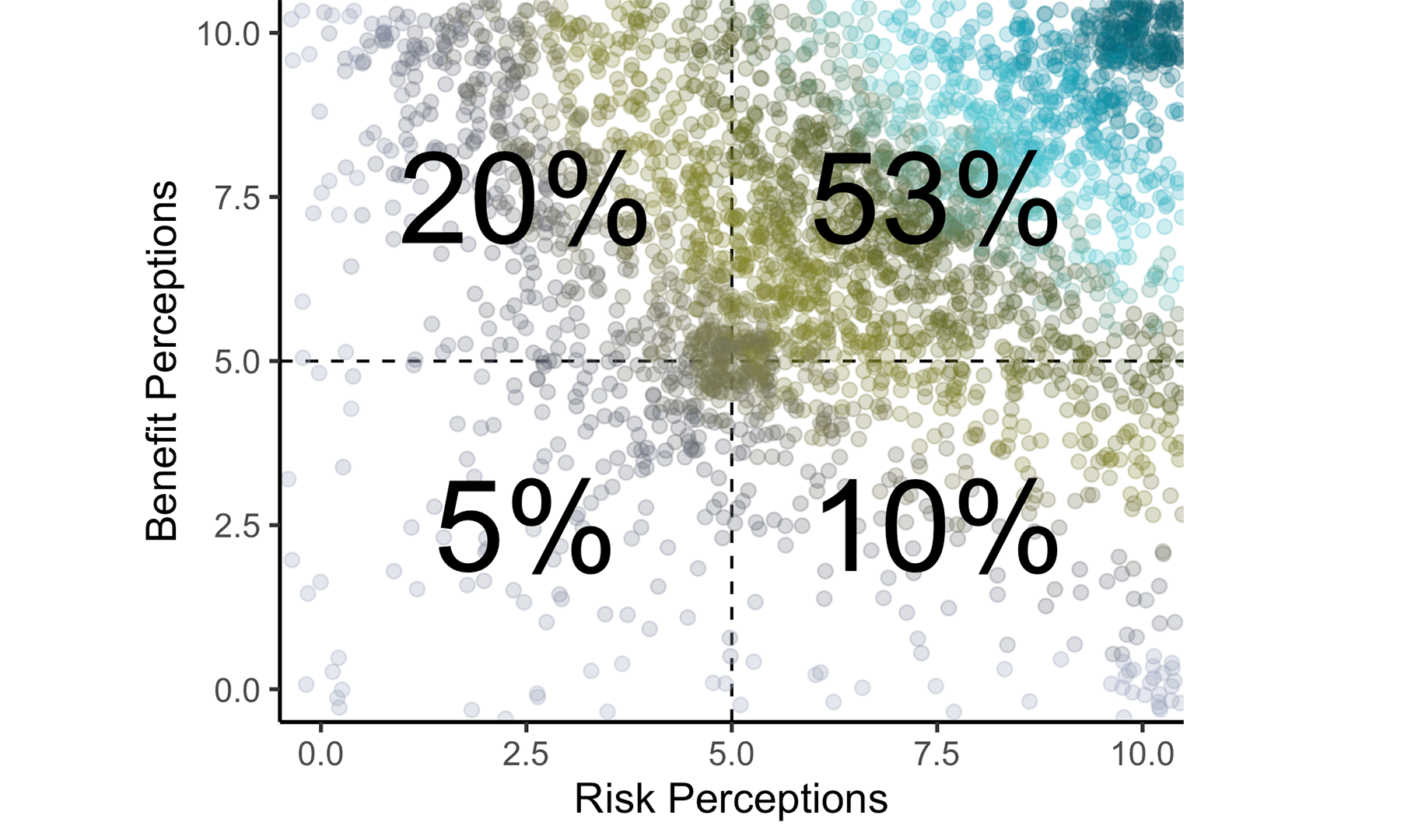 This climate change paradox may define the future of the technology. Concerns about energy reliability and security are extremely important but variable, shifting significantly when energy supplies contract and international events sharpen the focus on energy security (as has occurred with the Russian invasion of Ukraine). Climate change is a constant that will increasingly affect future generations. Progress is slow, but a growing proportion of US residents recognise the threats posed by climate change. This is particularly evident in the youngest voting blocs. Will this increasingly large portion of the electorate turn to nuclear energy as a solution? Possibly, but such a shift may hinge on the arguments made about advanced nuclear technologies. 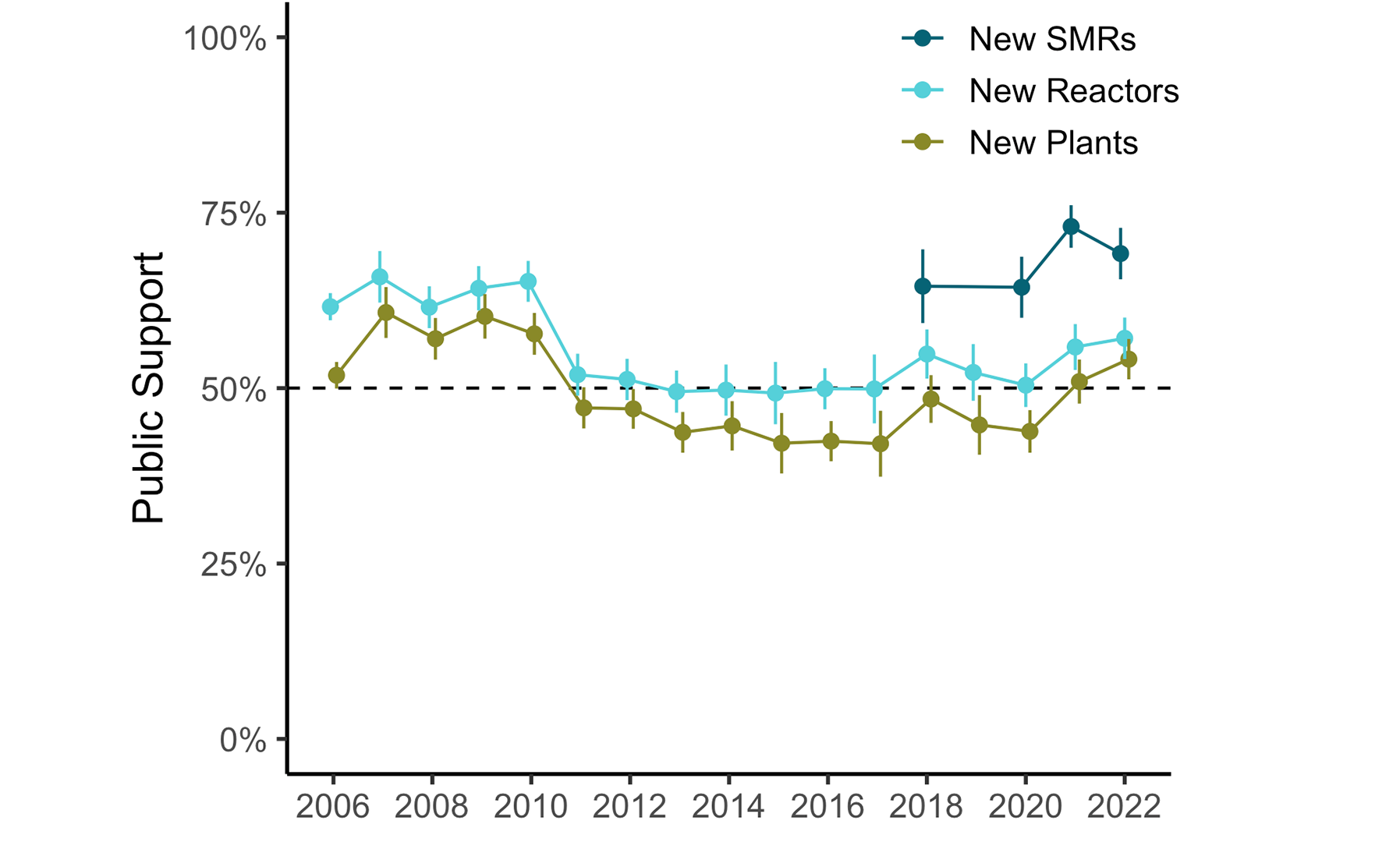 Our survey results show that people who worry about climate change are more open to advanced nuclear technology than they are to traditional nuclear reactors. In our most recent survey, 65% of the respondents who worried most about climate change supported the use of small modular reactors in the US; less than 50% supported the construction of traditional reactors or plants. These results suggest that, in addition to solving some of the technical and economic challenges facing nuclear energy, advanced nuclear technologies may help in solving a key societal challenge: by enabling the modern environmental movement to shed its anti-nuclear legacy, whereby the promise of nuclear energy can be seen as a critical component of a low carbon energy mix needed to address climate change. Time will tell if advanced nuclear technologies and the narratives that surround them will rise to the occasion.

* Support is measured on a 1 to 7 scale, where 1 indicates strong opposition and 7 indicates strong support. Support percentages are calculated by dividing the number of supporters each year (response = 5, 6, 7) by the number of supporters and opponents (response = 1, 2, 3) that year; respondents who are unsure (response = 4) are not included in the calculation. In 2022, 21%, 25%, and 30% marked unsure (4) in response to the new plants, new reactors, and new SMRs questions, respectively.