JL MAG is the world’s largest and first CO2-neutral producer of sintered neodymium-iron-boron (NdFeB) magnets with its headquarters in Ganzhou, China. The start of huge volume demanding projects for the electrification of automobiles has increased demand for NdFeB magnets, which has resulted in an almost doubling of annual revenue at JL MAG. For this reason, further production plants in Baotou and Ningbo in China were built, and a plant in Monterrey, Mexico, is coming in 2024.

As a leading magnet supplier, JL MAG is listening to market requirements and provides technical solutions for enabling products, reducing critical materials, and pushing down costs for customers. JL MAG’s newest development is localised coercivity control in sintered NdFeB magnets, which is expected to be a game-changer in efforts to reduce reliance on heavy rare earth elements.

The development of sintered NdFeB magnets delivered the strongest magnet materials with the highest room-temperature magnetic field (remanence) and demagnetisation resistance (coercivity). The associated success story includes numerous applications with higher efficiencies due to higher power density and even applications that could only be enabled through the use of NdFeB. The biggest applications in terms of demand are wind turbine generators and traction machines for automotive. Traction machines contain one to three kilograms of sintered NdFeB, and wind turbine generators contain more than 1,000kg of this material.

Sintered NdFeB magnets derive their coercivity and resulting temperature stability from the use of heavy rare earth elements, such as dysprosium, terbium, and holmium. The increasing demand for high-temperature stable magnets, driven by the electrification of automobiles, has resulted in price increases for these elements. The entire magnet industry is searching for processes to reduce these elements while maintaining or even improving the temperature stability. The first sintered NdFeB magnets using heavy rare earths were produced by what is now referred to as the traditional method: 600-1,200kg of heavy-rare-earth-containing material was melted, pulverised, pressed, aligned, and sintered. Afterward, the produced magnet material was cut into final dimensions.

Wind turbine generator production has focused on heavy-rare-earth-free material solutions. However, in order to achieve this, power density has not been maximised, resulting in lower efficiencies.

A quantum step forward in the development of sintered NdFeB was the reduction of heavy rare earths by keeping a large fraction of these elements out of the base material and instead adding them via diffusion into the magnet, after cutting the magnet material into final dimensions. With this so-called grain boundary diffusion  (GBD) process, a significant reduction in heavy rare earth usage was possible. Because of the limitations of the diffusion process, which stops when a material gradient gets too small, the dimensions of the final magnets are limited to approximately 6mm in the smallest dimension.

With closer scrutiny of the 6mm limitation, one realises that the magnet material is not homogeneous, and there is no clear limit of coercivity enhancement by the diffusion process. The volume near the surface from where the diffusion begins contains more heavy rare earth content and also has a higher coercivity, compared to volumes that lie further away from the diffusion starting surface. This physical fact is neglected by the requirement which is given in the specifications of the customers. For the traditional process, the material properties were homogeneous, and the resulting quality-assurance procedure of the customer followed IEC standard 60404-5. This standard describes how to measure a homogeneous part in a closed magnetic circuit. This type of measurement cannot distinguish between zones of different demagnetisation resistance, unfortunately.

Coming back to the fact that diffusion magnets are always inhomogeneous, a question arises as to how to turn this into an advantage. The magnetic circuit does not need a homogenous material. Applications need a magnet that has a sufficiently high local coercivity at each position inside the magnet. Excessive coercivity can be a disadvantage and can lead to locally reduced remanence. In addition, there is no physical reason why high-field concentrations should appear inside a magnet. The field density in electrical machines invariably has ‘hot spots’ at the magnet surface. Since the diffusion process starts from the surface and gives a gradient to the magnet’s centre, the diffusion process is the best solution for locally applied coercivity.

The most recent development in reducing heavy rare earths in a sintered NdFeB magnet is local diffusion according to the local requirement of coercivity. JL MAG refers to this as three-dimensional grain-boundary diffusion (3D-GBD). Large reductions in heavy rare earth usage result in significantly associated price reductions, having been observed for several traction-machine projects. 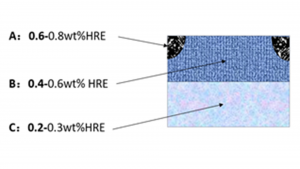 Finally, the potential outcome still depends on the specification. Specifying the magnet as consisting of several zones, with specific homogenous coercivity requirements, is an initial challenge. This is a compromise enabling the standard IEC 60404-5 on cut-off specimens to be utilised.

The largest potential is obtained by a real, three-dimensional profile of heavy rare earths and coercivity for the respective zones. Magnet users are still reluctant to go in this direction, as it results in quality assurance to standard IEC60404-5 no longer being possible at the part level.

The final release testing of a magnet is shifted to the release at the machine level, at a test bench. In parallel, all production processes need to be fixed by a magnet supplier – akin to existing automotive standards.

Why insist on a part-level release as the exception for a sintered 3D-GBD NdFeB magnet?

Lamination sheets or hardened surfaces of shafts are good examples that show that not all parts of an electrical machine can be measured at the part level, but in fact, need machine-level testing.

The local-diffusion approach does not require additional effort in magnetic-circuit engineering. The counter field distribution is calculated anyway and can be given as part of the specification to the magnet supplier. Furthermore, the scenario for inserting the magnets into the machine needs to be discussed. In the case of non-oriented insertion, where the side with higher coercivity is not necessarily at the required position, the hot spots need to be mirrored symmetrical in order to enable a randomly oriented insertion solution. Otherwise, markings need to be applied.

Finally, in order to enable a local diffused 3D-GBD magnet, an individual discussion with quality assurance and production teams needs to take place for each project, in order to define the degree of willingness to accept inhomogeneity. The variety of possibilities with 3D-GBD is immense and should be evaluated, in particular, for projects with huge volume demand like EV projects for automotives.