Professor Rituparna Kanungo from Saint Mary’s University and TRIUMF, and her collaboration team, are uncovering new features in rare isotopes, transforming the fundamentals of nuclei and demonstrating a novel way forward for nuclear science.

Matter in the visible Universe has a wide variety that stems from its heart, the nuclei. The diverse collection of nuclei embodies the beauty of nature’s strong force that combines only two building blocks – protons and neutrons –, creating this enormous wealth of matter around us. The oxygen that we breathe, the carbon in our body, and the iron in our blood are distinctly different in character: but what drives them to be this way? Understanding the strong force that governs how nature organises the protons and neutrons has been a century-long challenge. Scientists have acquired knowledge on the nature of nuclei that we commonly find around on Earth, which are stable or very long-lived and have a nearly balanced ratio of neutrons to protons.

However, much of what nature has to offer through the short-lived and weakly-bound rare isotopes remained beyond our perception until recently. Most of them have a highly unbalanced neutron to proton ratio, opening new perspectives on the nuclear force. They are created in exotic cosmic environments, such as colliding and accreting neutron stars and supernovae, and are the breeding ground for most of the heavy elements, such as Gold, Silver and Uranium, that we see around us. They form the laboratory access to gain some knowledge on the condition of matter in extreme neutron-rich objects like the neutron star through the equation of state.

The challenging feat of producing the rare isotopes on earth by fission, spallation, and fragmentation of stable nuclei has been accomplished at few specialised accelerator centres, of which the ISAC/ARIEL facility at TRIUMF in Canada offers high-quality, low-energy beams of rare isotopes. 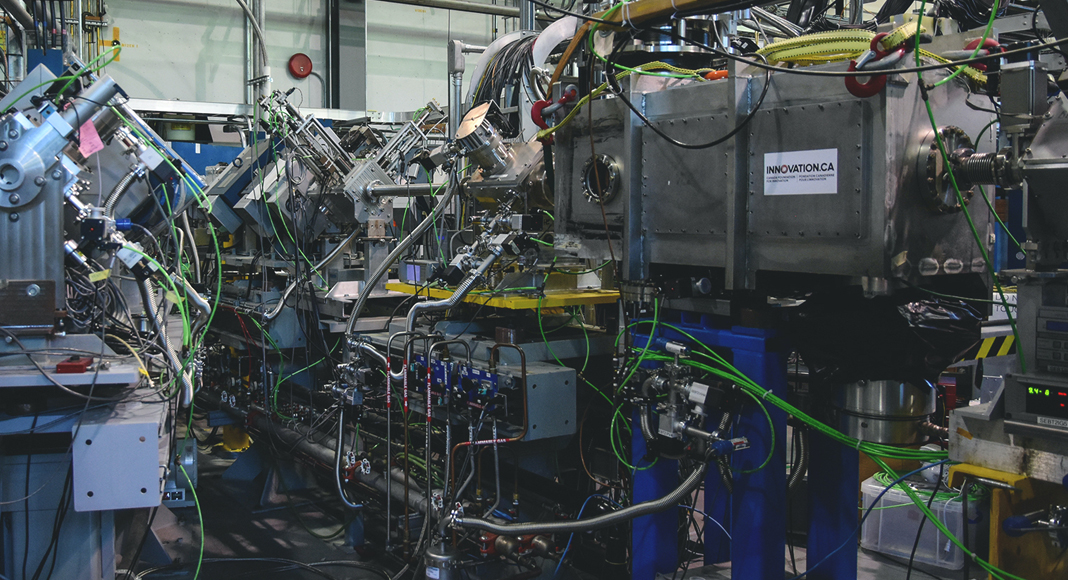 Much to our surprise, the rare isotopes are exhibiting unexpected new characteristics, transforming the traditional rules in nuclear science. New forms of nuclei are emerging – the most exotic being the neutron halo. In the nucleus of an element, as the neutron number increases, the outer most neutrons become increasingly weakly bound. Eventually, the nucleus cannot hold them via the strong force, leading to neutron unbound energy states, often known as open quantum systems. Towards the edge of nuclear binding, an unexpected change in the appearance of a nucleus is emerging. One or two of the last very weakly bound neutrons are suddenly located at a large distance from the rest of the nucleus, forming an unusual large neutron halo around a compact core nucleus.

The neutron halo was discovered through measurements of the matter radii of the rare isotopes. It dramatically alters the known image of the nucleus, breaking down the rule that radius of a nucleus is proportional to one-third power of its mass number (i.e., total number of nucleons). The most dramatic halo size observed in the last bound lithium isotope11Li with only 11 nucleons is comparable to the matter radius of 208Pb with 208 nucleons. 1 The halo is formed of two neutrons located far from the 9Li core. 2 These two-neutron halos are also a unique three-body quantum system, where any two components are not bound. They are called Borromean nuclei.

The experiments to determine the matter radii require relativistic energy in-flight rare isotope beams available at GSI in Germany, RIKEN-RIBF in Japan, and FRIB in the USA. The heaviest Borromean halo thus far was found in 29F from our studies at RIKEN-RIBF. 3 The halos open questions on what fundamental secrets lie behind their occurrence and what their consequences are. It is still under investigation as to what aspects of the nuclear force lead to such exotic halos appearing. Discovering if and where neutron halos exist in heavier nuclei remains an open frontier. 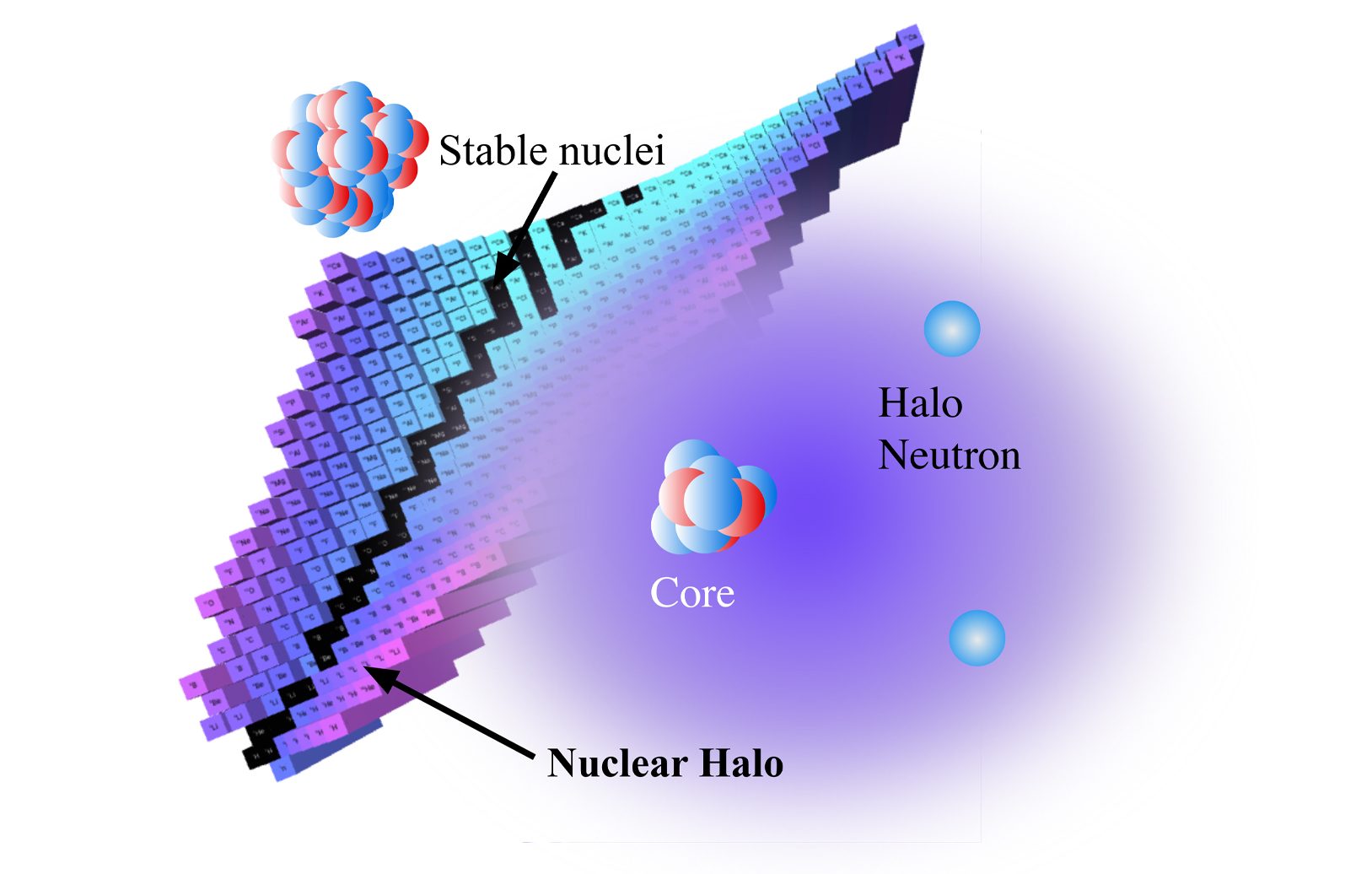 The existence of the halos cannot not be explained by the conventional knowledge of how we expect the neutrons and protons to be arranged in these nuclei, i.e., nuclear shell structure. Experiments are therefore being conducted to examine rare isotopes through nuclear reactions. This enables observing the quantum states in which these halo neutrons reside. It is portrayed through the reaction probability distributions from knocking out of the halo neutrons measuring the momentum distribution profile, their probability of dissociation in a field of virtual photons by a heavy target (Coulomb dissociation) at the in-flight relativistic rare isotope facilities. A complementary approach is the transfer of the halo neutrons measuring their angular distribution pattern, done with low-energy re-accelerated rare isotope beams, such as at TRIUMF and ISOLDE at CERN. Such measurements have unveiled yet another unexpected change to the nuclear shells. Conventional shell gaps (magic numbers) are found to disappear, and new ones are appearing. Thus far, the observations limited to the edge of nuclear binding in light nuclei find the neutron magic numbers 8, 20, 28 to disappear in neutron-rich nuclei. New magic numbers instead have appeared at neutron number 6, 16, 32 and 34 in such regions. 4,5,6

Nuclear shells are imprinted in nature in the abundance pattern of elements. They determine the variety in the characteristics of nuclei and influence their reactions and decays. Nuclear shell structure therefore plays a key role in powering, and shaping the creation of, our visible universe. The fundamental changes to shell structure with the appearance of exotic nuclear halos in rare isotopes has called for reforming the nuclear models that were built on nuclear interactions guided by stable nuclei. The unexpected new features emerging in rare isotopes are challenging our knowledge on the strong nuclear force.

From a shell model perspective of effective interaction, there has been much theoretical advancement that predicts the tensor force to be a key driver of the shell evolution, together with other effects such as deformation and weak binding. 7

Defining the nuclear force from the first principles with a link to the strong interaction between quarks, quantum chromodynamics (QCD) is a daunting task yet to be accomplished. A path towards such an attempt is currently enabled through formulation of chiral effective field theory. These chiral forces, however, need to be tested against data with both stable and rare isotopes. The three-nucleon force has been found to be essential in explaining the appearance of the new magic numbers. 8 The precise nature of the three-nucleon force needs to be benchmarked by a variety of experimental observables throughout the nuclear landscape. Explaining the observed Borromean halos beyond helium and predicting new ones remains a theoretical challenge from first principles.

The majority of the rare isotopes at play in the Universe are yet to be explored. The coming years will open exciting new prospects as major developments are stepping up the facilities for extending the reach to heavier rare isotopes. This will help uncover how the new changes in nuclear shells and the extraordinary neutron-rich surface in rare isotopes influences processes like neutron capture, creating heavy elements in nature. An era of discoveries therefore awaits in the horizon.