SatRevolution on using technology to tackle overcrowding in space

In an interview with Innovation News Network, Tomasz Pozniak, Chief Development Officer at SatRevolution, discusses the effect the growing satellite market will have on overcrowding in space.

SatRevolution is a Polish company that specialises in the design and production of nanosatellites. SatRevolution strives to meet the challenge of reducing costs while also promoting sustainability in space technology.

“Commercial satellites are just a part of SatRevolution’s business activity. In 2020 we plan to launch four satellites in total, including two for commercial customers (SteamSat and SW1FT) and two as a part of research and development projects we participate in.

“It is our pleasure to announce that we have just received a grant for carrying on with one of our primary projects called REC: Real-time Earth-observation Constellation. Based on our very own NanoBus platform and deployable optical telescope DeploScope, the constellation will enable real-time imaging of the Earth (refreshed every 30 minutes) in high quality resolution equivalent to satellites ten times heavier, thus reducing costs significantly. We see a wide range of areas where our solution can be of use: starting with crisis management, insurance, precision farming, land survey and smart city monitoring,” commented Pozniak.

Will there be a rise in small or nano-satellites?

“Without a doubt. As various independent sources forecast, the nano and microsatellite market (which just a year ago was worth around $1.5bn) will double its value by 2024 and will keep growing – to just over $5bn by 2027.

“Naturally, such rapid growth has its consequences. On the one hand, the satellite market will become more egalitarian, allowing not only big players but also smaller companies to have their fair share in slicing the space cake. On the other hand, launching more satellites leads to orbit congestion and may cause rise of space debris,” answered Pozniak. 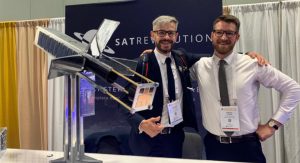 How are private and public sectors trying to combat overcrowding in space?

Pozniak highlighted that “there are two parallel ways of dealing with orbit congestion. First is the idea of shared satellite missions, which means launching several external payloads on one satellite at the same time. You can compare it to traveling by bus instead of driving a car by yourself.

“The second way is making sure that the satellites we launch into orbit are equipped with deorbitation systems enabling controlled removal of the spacecraft from space. At SatRevolution we use both methods. In fact, one of our very own projects uses the NanoBus 3U platform to allow independent entities to place several innovative sensors or experiments on the satellite at the same time.

“As for making satellites more space eco-friendly, we cooperate with the British company SteamJet Space Systems which has developed a water-based propulsion system designed for small satellites and CubeSats. Their solution will be launched in-orbit on our commercial nanosatellite in the third quarter of 2020.”

How does the water propulsion system developed by SteamJet Space Systems work?

“These thrusters use water or any other low pressure, non-toxic and non-corrosive fluid as the propellant to form thrust in a low power resistojet. Compared to high-pressure cold gas thrusters, such a propulsion system is fully safe for launch-site operations or storage within the International Space Station, therefore, reducing overall mission risks.

“The idea behind steam thrusters is simple: a satellite is equipped with a water tank, as the water heats up it is thrown into space through a nozzle as vapor in a controlled manner. Considering the current trends in the space sector, it is a feasible option that in the future water-based propulsion engines could be refueled in the process of asteroid mining.”

What are the benefits of this technology?

“The main benefits of using a water-based propulsion system include the optimization of orbit congestion, station keeping, collision avoidance, operation in constellations and efficient deorbiting. Thanks to the system’s high thrust and low power consumption, satellites can be operative sooner, stay longer in space and use less power than with traditional electric propulsion. The small size of the propulsion unit, whose volume is compared to a tin of tuna, also makes the satellite lighter than typical devices, which in turn contributes to a reduction of launch costs.”

Do you want the latest news and updates Innovation News Network? Click here to subscribe to all the latest updates, and stay connected with us here.