Scientific theories and the power of enquiry

Professor Lawrence C Scharmann, from the University of Nebraska, discusses the power of theory in scientific enquiry and how, through understanding the drivers behind and applications of theory, science and theology do not have to be at odds.

Science – as a way of knowing and making sense of the world – uses many conceptual ‘tools.’ Among these are observations, inferences, predictions, hypotheses, laws, and scientific theories. Together, this array of conceptual tools represents a powerful heuristic used to solve scientific puzzles and problems. New discoveries often begin with observations obtained through our senses (sight, smell, sound, taste, and touch) and by means of measurement instruments (e.g., telescopes, microscopes, mass balances, thermometers, computers) that extend our senses. Observations are repeated (and independently corroborated), patterns are inferred and are then aggregated to form a more generalised conclusion – or theory. Theories permit scientists to make new predictions (i.e., if -> then conditional propositions), pose and test hypotheses, and collect confirming or disconfirming additional data.

Theories, then, are simultaneously an endpoint of inductive science and the starting point of deductive science. Together, induction and deduction frame a self-correcting cycle of verification – in other words, science – through its working theoretical paradigms – which is necessarily uncertain (especially at the outset of new discoveries), subject to change with the accumulation of new evidence, and increasing in probabilistic accuracy over time. Scientific theories that continue to be useful tools are those that yield confirmatory evidence repeatedly; theories that begin to produce disconfirming results (i.e., anomalies) eventually get replaced by a new theory that explains both everything the previous theory did plus account for the anomalies encountered.

Scientific theories, nonetheless, are often mischaracterised by non-scientists, journalists, etc., as being merely someone’s guesses; guesses that would be more appropriately labelled as conjecture or speculation. Others mistakenly equate theory and hypothesis. Still others incorrectly assert that scientific laws (which refer to a limited set of remarkably repeatable observational data) are ‘stronger’ than theories. In the practice of science, however, laws are narrowly confined and limited in application, whereas theories are broad in scope and widely applied. Simply stated, theories are scientists’ most powerful tools. For example, the Hardy-Weinberg law is remarkably useful in accurately predicting the change in frequency of dominant/recessive alleles within a population over time. The data sets for which the Hardy-Weinberg law exhibits explanatory power are merely a small fraction of the aggregate corroborative lines of evidence in genetics, which in turn is but one support discipline for evolutionary theory.

Do you believe in evolution?

One overriding question I often get from non-scientists (and students) is “Do you believe in evolution?” I have learned over the extent of my academic career to be very careful in responding to this question. My standard response became, “Do you believe in screwdrivers?” I ask them if my question sounds odd – they affirm that it does – until I clarify that a screwdriver is a tool that one learns to use to assist in performing very specific tasks. A screwdriver is to a builder what a theory is to a scientist – a very good tool (when one uses it to resolve a specific need). I elaborate that I accept the evidence for evolution and the power it provides to solve puzzles and answer scientific questions. In other words, I don’t care whether anybody believes in evolution, I only care whether evolutionary theory works – does it provide explanatory power, predictive capacity, and does it permit broad testing of new ‘if-then’ conditional propositions.

“… science must insist that, whatever the factual state of nature, our yearnings and quest for morality and meaning belong to the different domains of the humanities, the arts, philosophy, and theology – and cannot be adjudicated by the findings of science.”1

Does one way of knowing preclude the need for the other two? Let’s consider music as a case. Science could undertake a study to establish which type of music (e.g., classical, country, gospel, pop, rap, rock) is scientifically superior. Criteria could be established, agreed to, applied, data collected, and an answer determined. But, in doing so, science does not account for appropriate ethical behaviour, inspiration, or even more simply, which type of music somebody likes. Thus, accepting a new way of knowing (science, specifically theories like evolution) doesn’t negate the need for other tools (or ways of knowing) in one’s toolbox. How many tools one wants to accept/use becomes a personal choice. 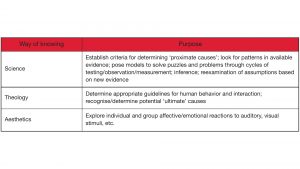 The debate that never happened

Some years ago now, I presented this logic to an evangelical minister who had requested to meet with me, and a biology colleague for the purpose of discussing the potential for having a debate concerning how did humans get here on Earth. The minister carefully considered my logic and finally asked, “So … you aren’t saying that science has the answer for everything … are you?” [I nodded that he was correct]. “Well then, there is really no need for a debate because one can accept answers from science without creating a conflict with religion.” [Again, I nodded]. “And … just because an explanation might be more scientific, doesn’t always mean it is better, just that it is more scientific.” The minister came to the conclusion that creating a false dichotomy wasn’t productive … and I could not have agreed more! The debate never happened!

In future articles, I will examine how evolutionary theory can be used as an applied problem-solving tool, what insights evolutionary theory provides in coping with a pandemic, and how biology teachers might establish more positive learning environments for evolution instruction.