Two years after the Chagos Archipelago bleaching event in 2015-2016, researchers observed the reefs starting to shrink, with coral cover and carbonate production reduced by 70%. However, upon returning in 2021, the researchers discovered the reefs on a path to recovery at varying speed varied from place to place.

The researchers studied 12 different reefs of the Chagos islands in the Indian Ocean, before and after the coral reef bleaching event to evaluate the impact of climate change on reef functions. Their findings were published in a paper published 24 March in Limnology and Oceanography.

Coral reefs are shallow-water ecosystems that play important roles in the tropics that house rich biodiversity and supports fisheries, coastal protection, and tourism. As well as this, about 275 million people live within 30 kilometres of a coral reef.

Bleaching is caused by warmer water temperatures as a result of climate change that result in the corals expelling their symbiotic algae, turning white. Corals can survive bleaching and recover their multi-coloured forms, although extreme heatwaves may result in large-scale mortality.

Where key coral species have been observed to return quickly to their original state, the underlying physical reef structure had remained intact. In remote or protected areas without local impacts such as pollution or fishing, coral reef communities and their functions can recover quickly, even after large-scale disturbances,” explained Ines Lange, an author of the study and Postdoctoral Research Fellow with a project funded by the Bertarelli Programme in Marine Science. 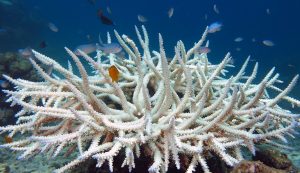 To quantify the reef recovery and determine the health of the corals, Lange used the ‘reef budget’ method which measures net coral production against reef erosion over a certain period of time. The method was devised by Chris Perry, a Professor at the Tropical Coastal Geoscience Programme at the University of Exeter and co-author of the study.

According to the researchers, carbonate budgets are important indicators of a reef’s ability to provide habitat to marine life, protect shorelines from wave energy and assist reef islands to keep up with future sea-level rise.

“While there is increasing data on the impacts of mass coral bleaching on reef communities, our understanding of their recovery potential and knowledge on spatial variation of key contributing processes is limited,” explained Lange. “The reefs of the Chagos Archipelago in the central Indian Ocean are geographically very remote and thereby offered the opportunity to study the natural responses of reef communities.”

The study illustrates that reefs can recover quickly from coral reef bleaching and that carbonate budgets — the balance between biologically-driven constructive and destructive forces on a reef — allow us to observe how certain groups of organisms respond or recover from a disturbance. The study also allows a greater understanding of how the entire coral reef system operates at a functional level.

“This set of semi-pristine conditions is increasingly rare across our oceans, particularly on the coastal water,” explained Lorenzo Alvarez-Filip, a Researcher at the Biodiversity and Reef Conservation Laboratory Reef Systems Unit, at UNAM Mexico, Puerto Morelos, Mexico. “Therefore, it is likely that observing similar recovery rates on other reef systems would be necessary first to control local sources of stress such as pollution, sedimentation or eutrophication that are often associated with coastal human development.”

“There has been concern that coral reefs might be unable to recover functions of growth, accretion, and carbonate production which are essential for preventing reef island erosion and supporting fisheries,” concluded Ronan Roche, a Researcher at the School of Ocean Sciences at Bangor University, Wales. “The research shows that this is an initial stage of recovery which is uneven across these remote coral reefs and emphasises their susceptibility to any future bleaching impacts associated with global climate change.”