Small groups in Big Science: hunting the laws of the Universe

Professor Anna Lipniacka from the Department of Physics and Technology at the University of Bergen, highlights the role of the Norwegian physics community in Big Science of the LHC and explains how this involvement has stimulated new and innovative approaches.

The particle physics group at the Department of Physics and Technology, University of Bergen, Norway, has played important roles in several large international scientific collaborations. Our main focus is currently the ATLAS experiment at CERN’s Large Hadron Collider (LHC). Technological and societal innovations along with important results have resulted from our main research focus – hunting for the basic constituents of the Universe and understanding the laws governing it. Selected highlights of our research, the innovations to have come from it, and the challenges of Big Science by small, geographically distributed research groups, are briefly discussed in this article.

Beyond the Standard Model

The Standard Model (SM) of particle physics describes with great accuracy the matter that constitutes all presently visible objects in the Universe and, so far, it has survived scrutiny by a long series of experiments. The hunt for the last missing piece of the model, the Higgs boson, motivated the construction of the LHC at CERN. The matter described by the SM, however, constitutes only about 5% of the matter-energy budget of the Universe. The SM is unable to explain why even this 5% exists. Thus, the Higgs boson is far from being the last piece of the puzzle. It may, however, represent a potential gateway to the unknown realm that lies beyond the SM.

Our group has been active in constructing and operating ‘A Toroidal Lhc ApparatuS’ (ATLAS), one of the two multipurpose LHC detectors. Our interest in the ‘Higgs hunt’ was to look for Higgs boson decays to tau leptons. Tau leptons are the heaviest brothers of electrons, with essentially the same properties but around 3,500 times larger mass. If the Higgs boson’s role in giving masses to known particles is as predicted by the SM, it should decay preferentially to heavier particles. That such decays do indeed exist, and in the right amount, was confirmed unambiguously in 2019 by the ATLAS1 and CMS Collaborations.

Moreover, the Higgs boson decaying to tau leptons offers a unique opportunity to spot a possible violation of Charge-Parity (CP) symmetry. This symmetry needs to be violated to explain the very existence of the matter we are made of. No source of sufficient CP violation has been found so far. We will continue the hunt at the soon-to-come Run Three, and at the High Luminosity LHC runs beyond that.

While the SM has passed all tests at accelerators so far, astrophysical and cosmological observations without doubt require physics beyond it. They demonstrate that about 80% of the matter in the Universe is in the form dark matter (DM) particles whose properties differ from all particles contained in the SM.

DM plays a crucial role in the evolution of the Universe and thus of life itself. We know little about it, except for its gravitational interactions. There could even be a variety of different DM-made structures around us that we perceive only via gravity. The nature of DM can only be determined by experimental tests. Production experiments are one of the avenues pursued to study DM. Since DM was apparently produced in the Big Bang it can possibly be produced in the ‘micro Big Bangs’ of the LHC collisions. We therefore endeavour to spot it in the ATLAS Detector. Our group pursues a hypothesis that the Higgs boson is a gateway between the SM and DM. We look for DM production accompanied by the Higgs boson decaying to tau leptons. The results of two such searches initiated by our group in the ATLAS data will soon be made public, and we will continue this work with the Run Three data and beyond. 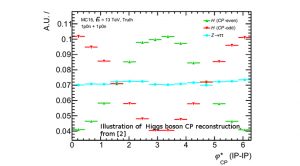 Even if we are lucky enough to spot DM-like particles in the LHC collisions, we still need to prove they are the ones constituting the DM in the Universe. Indirect searches investigate possible annihilations or decays of DM into the Standard Model particles. These SM particles would then be observable as cosmic rays, for example as gamma rays. The Cherenkov Telescope Array Observatory (CTAO), an ESFRI project presently in the pre-construction phase, endeavours unprecedented sensitivity to gamma rays from the DM annihilation. The universities of Bergen and Oslo have been engaged in the CTA Consortium since 2012. Becoming a member of CTAO, pending funding, would bridge the gap between particle physics (CERN-related research) and astrophysics in Norway, providing new insights necessary to discover the origin of DM.

Going where no one has gone before is a constant goal of particle physics. This brings innovations, often in unexpected directions. Some of them are on social level. ATLAS is run by a collaboration of physicists, engineers, technicians, and support staff from around the world. It is one of the largest collaborative efforts ever attempted in science, with over 5,000 members. On-line meetings, on-line courses, on-line internal conferences, on-line governance supported by well-defined and frequently reviewed structures have become a rule rather than exception in ATLAS.

This model has been adopted by Norwegian particle physicists distributed between several geographically distant Universities, allowing for the efficient use of national funding from the Research Council of Norway and making us the most tightly knit Norwegian research environment. A distributed research centre for CERN-related research is presently being formed, the first of its kind in Norway. The universities of Oslo and Bergen are the main contributors here, along with the Norwegian University for Science and Technology (NTNU), Western Norway University of Applied Sciences (HVL), and the University of Agder. Our work model has also shown remarkable resilience to COVID-19 disturbances.

Selecting particles of interest in busy LHC collisions requires extremely precise reconstructions of their tracks. ATLAS Inner Tracker (Itk) for the High Luminosity LHC will carry innovative 3D silicon pixel detectors, part of which will be provided and installed by a Norwegian consortium consisting of the universities of Bergen and Oslo, along with SINTEF MiNaLab (see: www.sintef.no).

Developing methods for the efficient use of distributed computing to analyse enormous amounts of LHC data is another innovation example. The Norwegian particle physics community has played an important role here by introducing the Advanced Resource Connector (ARC).

The scale of the experimental programme at the LHC demands that we do our utmost to extract relevant information from the data. With the tremendous development in machine learning (ML) and a set of deep learning techniques, one can suspect that there is a significant performance gap between the state of the art methods and the optimal ones. Our group is presently developing a pioneering analysis in ATLAS using a deep neural network to search for new physics in collision events where tau leptons are present. Further plans are to develop unsupervised deep learning techniques to open up for more model independent searches for new physics with no prior theory prejudice.

Artificial intelligence and ML have begun to play an important role in our society – probably larger than most people realise – and will have a major impact on our lives in the years to come. Numerous cases where ML algorithms have produced decisions leading to unacceptable biases related to, for instance, race or gender have come to the public attention. Our group, along with the particle physics community, is trained to critically analyse large and complex data sets; we are trained to identify and avoid biases; we have a strong focus on accounting for systematic uncertainties, as well as on scrutinising whether the training set represents the data in all aspects. All these features are of paramount importance when applying and developing powerful AI and ML algorithms. Decisions made by ML algorithms are by their nature opaque, and it can be difficult to understand why a certain decision is made. Our community thus has a significant focus on interpretability and explainability. We focus on understanding how decisions are made by the ‘black box’ algorithms and develop new tools to achieve this.

This article is supported by L Melzers Hoyskolefond. The support of the Research Council of Norway (RCN), the EU via MSCA-IF, and GRIEG call under co-operation between the RCN and Polish National Science Foundation is also acknowledged.