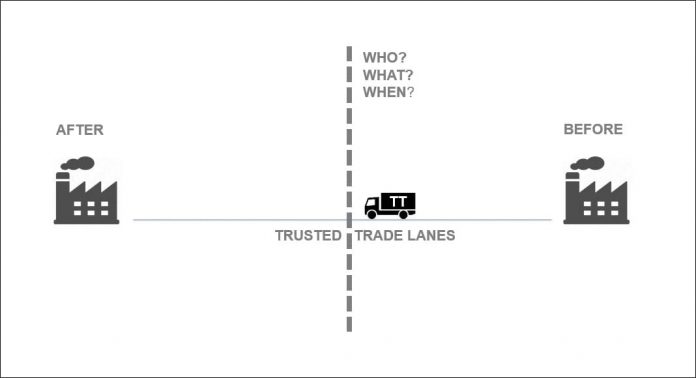 In May 2017, the European Parliament Constitutional Affairs Committee asked me to write an academic research report on how to design the new post-Brexit borders between the European Union and United Kingdom, based on international standards and global best practices.   The report and proposal – Smart Border 2.0: Avoiding a hard border on the island of Ireland for customs control and the free movement of persons – was presented for the European Parliament on 28 November 2017.

Since then, I have been asked to give testimony at hearings with the UK Government House of Commons on two occasions, and to the House of Lords on one. In addition, the report has been quoted in hundreds of articles and has attracted numerous media interviews. In short, Smart Borders is about utilising the best practices of existing customs techniques, models and technology. Smart Border 2.0 is about integrating and maximising the existing practices of customs techniques and implementing this model in one place, then using technology to make the model as efficient as possible.

During this period, I noted that two of the most important components of the Smart Border 2.0 model that I describe in my report were not fully understood by the majority. My conclusion is that I should have been more detailed and clearer in my report. Some of the things that I took for granted as common knowledge apparently were not known by non-experts.

Is it possible to have a frictionless border with Smart Border 2.0?

The simple answer to this is yes. There are no frictionless borders in operations at this moment in time, but as I have stated on numerous occasions, the model I described has, in the past, been tested operationally, by EU and Norway, during four years on the Sweden-Norway-border.

However, to implement Smart Border 2.0 with no infrastructure at the border, there must be a maximum level of trust between the two countries on each side. In addition, there needs to be a trusted trade lane involving companies who are registered as Trusted Traders, which then moves the border formalities and potential inspections away from the border to before and after the operational trade transaction.

In short: a Trusted Trader on one side of the border (Dublin) is going to export goods to the other side of the border (Belfast). The Trusted Trader (exporter) makes a simplified electronic export declaration. This can be done in several different ways, including entry into records: potential controls can be completed by self-assessment and/or intervention at the traders’ premises; the goods are transported by a Trusted Trader (transporter) to and across the border to a Trusted Trader (importer) in the other country; and the Trusted Trader (importer) does an import declaration, which again can be done in several different ways – all electronic so far. This is the Trusted Trade Lane concept and it is fully in line with international standards and conventions and included in the European Union Customs Code (UCC), the regulating customs law at hand. The Trusted Trade Lane concept can be used at all border crossings with a transport permit system, and the companies involved need to be registered and pre-vetted based on risk.

The remaining aspect of Smart Border 2.0 is that governments on both sides need to know the exact time when the goods pass the border; this time stamp regulates a wide range of the laws and regulations that constitutes the border formalities – the status of the goods, the ownership of the legal obligations, the time that manifests if certain rules and regulations are applicable or not. In my original report I described different technology solutions that can give us this time stamp, such as number plate readers, RFID technology, CCTV cameras (active border identifier solutions), GPS/GSM technology (Passive Border Identifier solution) and many other options. However, with maximum trust between two parties, we can also let the Trusted Trader report this time stamp.

The level of trust decides what border identifier to use, a solution could be to use the highest level of trust on the border between Republic of Ireland and Northern Ireland, while using trust level three on all other borders, including the English Channel.

A second misunderstanding of my proposal is the Trusted Trader programme that is proposed to be of use in the Smart Border 2.0 proposal, and how it is different from the existing Authorised Economic Operator (AEO) programme in the EU and United Kingdom. AEO is a model where customs administrations – in line with an international standard – certifies companies based on risk mapping and validation of specified criteria, making sure that these operators have a high level of compliance and security, and a low risk. In return, AEO companies are provided with simplifications and facilitation – speed, predictability, service and lower cost – for proven maintained compliance levels.

It is imperative that I am 100 per cent clear: Smart Border 2.0 cannot be implemented and offered to companies with only the present UK AEO concept in place. I am proposing that the United Kingdom first, and EU later, develop a new programme in line with present best practices. The present EU AEO programme, also used in the UK, celebrates its centenary this year; it is a legacy system in which I was involved in the building and development of.

The international standard that regulates AEO is the World Customs Organization (WCO) SAFE Framework. The WCO Member States (standing at 182 countries today) adopted the standard in 2005. All of the early adopters and older AEO concepts follow a similar structure and are faced with the same challenges. Thresholds are too high, the cost to join is too high and the benefits for companies are too few. Still there are almost 50,000 companies in the world that have applied for, and maintain, AEO status; a large number of these companies are located in the European Union. Today more than 70 countries have operational AEO programmes, and many more are building new modernised programmes as we speak. The new AEO concepts, or Trusted Trader Programmes, developed in the last five to six years are very different from the older models.

What would a new UK Trusted Trader Programme (TTP) look like under Smart Border 2.0?

This is my proposal:

The UK needs a modern multi-tier TTP, based on fully digital processes, low thresholds, advanced automated monitoring and a state-of-the-art attractive benefit programme, embracing the present AEO companies, and with a strategy to sign technical mutual recognition agreements with all trading partners, in EU and in the rest of the world.  Technical customs agreements are much faster to negotiate than free trade agreements.

It is likely that the three pictures above – the “missing link to a frictionless border” – would have made my original report clearer, however it is never too late to clarify an idea. Therefore, let us call this updated model presentation Smart Border 2.1.

Finally, I find it important to make a comment about another border proposal that has been made by a colleague in the business. I do this since the two options sometimes are occasionally mixed up and discussed as the same solution.

Dutch broker Hans Maessens has written a report sponsored by SGS: “Drive through Borders: A Comprehensive UK and EU Customs Strategy for Brexit”. It is presented in a similar approach to Smart Border 2.0, moving the formalities away from the border, using more traditional customs systems and techniques – primarily through utilising the transit procedure. This model would solve some of the problems of the Irish border if or when the United Kingdom joins the international transit convention. However, it is different from my proposal, since it would still demand technology at the border where the transit has to be scanned in line with the concept. I believe that the solution proposed by Maessens shows that there are different instruments that can contribute to frictionless or low fiction border solutions, also using more traditional customs procedures.

Hans Maessens stated in his hearing to the House of Commons Northern Ireland Affairs Committee recently that his proposal was more about customs techniques, and that my proposal was more a high-tech solution. I write to clarify that I have always been extremely clear in my statements that Smart Border 2.0, based on global border best practices, is a model that primarily utilises existing international standards and customs techniques. However, we need modern technology to make these state-of-the-art customs techniques (AEO/Trusted Trader, Single Window, One-Stop-Shop, Coordinated Border Management) elevated to a new level: 2.0.

I am 100 per cent convinced that the Smart Border 2.0 model can solve the border issue, not only on the island of Ireland, but also for the huge amounts of goods that travel every hour across the English Channel, through the Eurotunnel or via the ferries from Dover to Calais. On these border crossings we can use the modern technology described in my report, and in the pictures above, on one level below the application at the island of Ireland.

The UK needs one operational model that can be applied in a systematic and simplistic way for maximum facilitation and optimal security of the borders. This is important both for the EU and UK, for both Government agencies and for traders. Smart Border 2.0 provides that solution.

Share
Facebook
Twitter
Linkedin
Email
Print
Previous articleMaking inland ports greener: what can Europe do?
Next articleWaste to energy initiatives: the next step toward a circular economy