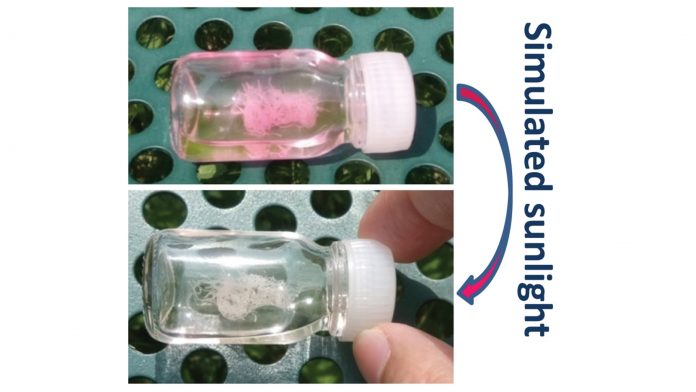 Chemical weapons constitute a real danger (or lethal threat) for humanity. Despite the recommendations of the Organisation for the Prohibition of Chemical Weapons (OPCW),1 chemical warfare agents (CWAs) continue to be developed and used both by states and terrorists alike, killing hundreds of people around the World. NATO and the EU have recognised their use as a crime against humanity.

The aim of the CATALTEX project2,3 is to design and create self-decontaminating textiles which are able to protect people and animals by decomposing CWAs via photocatalysis under daylight or indoor illumination in environmental conditions.

How can you protect yourself from CWAs?

The way to protect yourself from CWAs is well-known and has been applied since the First World War: the use of barriers between the respiratory organs or the skin and the contaminated environment. However, harmful agents will not be destroyed but retained. This study aims at the total destruction of the CWAs by using hybrid systems composed of an ultra-thin layer of photocatalytic nanoparticles immobilised on the cotton fabrics.

The approach is simple and based on a non-hydrolytic sol-gel process of TiO2 deposition synthesis followed by a mild hydrothermal treatment at 100°C. The crystallisation of TiO2 was confirmed by Raman spectroscopy, and the surface composition was investigated by X-Ray Photoelectron Spectroscopy. The morphology of the TiO2 layer was imaged by Field Emission Scanning Electron Microscopy, and Atomic Force Microscopy, UV-Vis absorption spectra and the luminescence properties of the TiO2, as well as their thermal properties, were investigated.

The hybrid Cotton-TiO2 was shown to exhibit good photocatalytic activity under a sunlight simulator. No calcination treatment is required to activate the TiO2 nanoparticles, which makes the implementation of the textile modification easy and potentially achievable anywhere.

The photocatalytic process and the molecular destruction

Photocatalysis results from the generation of electron/hole charge carriers following the absorption of UV/Vis radiation and subsequent formation of superactive radicals O2 -•or HO• through the interaction of ejected electrons and holes with atmospheric O2 and H2O, respectively.4

The resulting radical species will destroy any adsorbed organic molecules in contact with cotton fabrics. To enhance the photoactivity of TiO2 and promote the photocatalytic efficiency under visible light, Ag or AgBr nanoparticles heterojunctions were generated on the TiO2 layer. This approach strongly boosts the photocatalytic efficiency of the TiO2-modified cotton fabric, enabling it to be used under both sunlight and indoor illumination.

The catalytic fabrics were successfully evaluated with the model organic compound Rhodamine 6G (Rh6G) as shown in Fig. 1; these studies pave the way for the degradation of chemical weapons using similar cotton fabrics under daylight.