Dr Zoran Ivanovic, from the New Aquitaine Branch of the French Blood Institute, explains how their team develop the new strategies in stem cell engineering and conservation learning from the single-cell eukaryote evolution.

The cell engineering team of the New Aquitaine Branch of the French Blood Institute (Etablissement Français du Sang Nouvelle Aquitaine) is working on the conception and development of ex vivo procedures for expansion and conditioning of hematopoietic and mesenchymal stem cells for transplantation, as well as on the improvement of low-temperature storage and cryoconservation procedures. The conceptual framework for this is their “evolutionary paradigm of stem cells”,1 which is based on a hypothesis considering anaerobic-to-aerobic single-cell eukaryote evolution as a paradigm for stem cell self-renewal, commitment, and differentiation (Figure 1).

The somatic stem cell commitment and differentiation reminds the acquisition of new cell functionalities during the evolution. The point of passage, from self-renewal to commitment and consequent differentiation, is reminiscent of the evolution of the first single cell eukaryotes living in anaerobiosis and reproducing by the simple mitotic divisions “à l’identique” (principle of self-renewal), to the first asymmetric divisions and divergence of eukaryotes and all other acquisitions of molecular extensions during the “colonial” evolution of single celled eukaryotes and early evolution of metazoans (principle of differentiation) (Figure 2), in parallel with the rise in O2 concentration in the environment.

For each of these functional extensions, a molecular mechanism had to develop to “lock” its execution, allowing the self-renewing division, and consequently, perpetuation of the lineage – which would be, without this mechanism, rapidly exhausted. According to this hypothesis, commitment and differentiation are spontaneous processes if energy is available. For example, they mainly depend on extrinsic factors – as was the acquisition of the new functions during the evolution, in the function of adaptation to microenvironment. At the same time, the self-renewal cannot be realized without the active “locking” and “inhibiting” of these molecular extensions, leading to the differentiation. Thus, the degree of the maintenance of “primitiveness” (referring to a combination of self-renewal ability and differentiation potential) of a stem cell, is associated with anaerobiosis, nanoaerobiosis, and microaerobiosis. The mechanisms controlling the locking/unlocking of a perspective for differentiation are obviously related to metabolic/energetic profile and oxygen-sensing. Each of these mechanisms is related to the point in which it appeared in evolution and the ecological-niche conditions that allowed/favored its appearance. These conditions must be, in general, conserved till today. Concerning the self-renewing division, once enabled, it should rely on the expression of those genes, which are strictly necessary for simple anaerobic (low energy) cell cycle regulation, and survival. This part of the genome we consider as “minimal essential eukaryote genome” and it should not be much changed from the first single-cell eukaryotes to human. Of course, the simultaneous expression of the “lockers” and “inhibitors” will mask this minimal essential genome, demanding the evolutionary follow-up for each mechanism, revealing the most ancestral ones. For example, the transcription factors as Fox, Hox, Sox, POU family (includes Oct), PAS etc, in addition to the parts of signalling pathways as Wnt (b-catenin), Notch (some composants), TGfb (some signalling composants), MAP kinases – appeared in protists and still serve in mammalian cells and are related to the stemness. We hypothesize that these factors appeared in relation to the diversification of the life cycle in protists (presenting the prototypes of self-renewal, differentiation, and dedifferentiation) and may belong to the “lockers” and “inhibitors”, but some of them may also be part of the minimal essential genome.

From this viewpoint, stem cells represent a functional souvenir to early eukaryote evolution. Their main role is to enable the longevity of the organism in a physiological situation, and a regenerative response, if necessary. 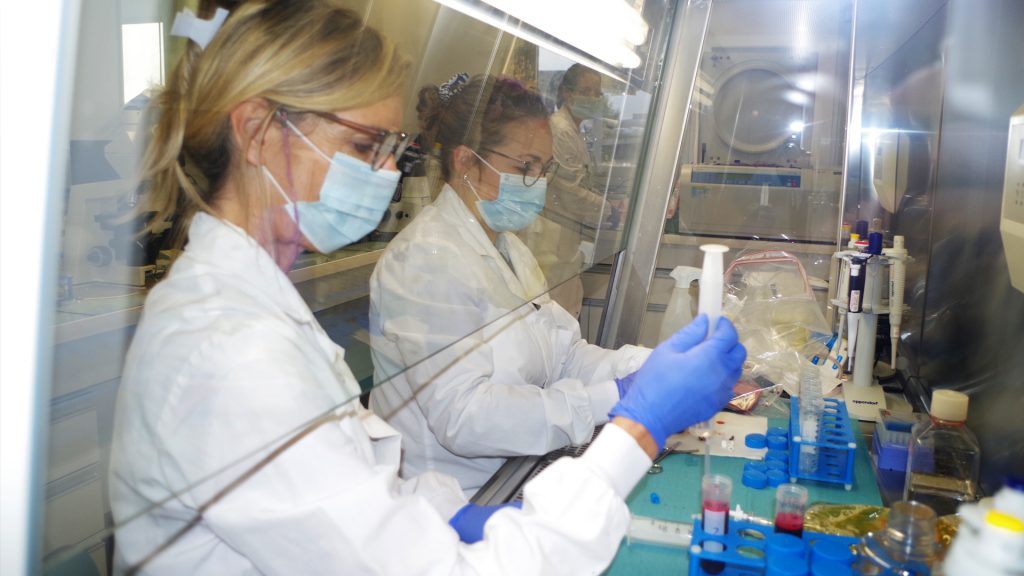 Exploiting the concept in translational research

The idea to connect the ancestral eukaryote evolution and the stem cell self-renewal/commitment decision stemmed from the previous experiments suggesting that a low O2 concentration environment maintains the proliferative capacity of stem cells2. This principle was used to conceive the ex vivo expansion procedures based on stimulation of the cellular “hypoxic response”, allowing the full maintenance of HSC potential with simultaneous large-scale production of committed progenitors successfully translated to the level of a clinical trial of transplantation of expanded cells. Exploring the modulation of the mechanisms that are determining the metabolic profile helps to engineer not only ex vivo amplification of HSC and productions of HPC but also to significantly improve the procedures of the mature cell production, for example, red blood cell production. The phenomenon of anaerobic mitochondrial respiration recently showed in normal hematopoietic stem cells,4 not only proves that it is not a specific cancer feature but also suggests that it is an ancestral feature of cell primitiveness. Provoking this type of respiration can be of paramount interest in cell therapy and regenerative medicine since it can allow the survival of the injected cells in the ischemic tissue areas3. With that respect, the induction of anaerobic respiration is studied as a toll of a specific cell conditioning. Further consideration of the evolutionary paradigm led to the discovery of the principle of cell hibernation (patent FR 1553659): a temporary exposition of cells to a low O2 and high CO2 environment in moderate hypothermia, which gives the cells an acquisition of resistance against severe hypothermia during the several weeks long periods (Figure 3). Exploring this phenomenon enabled the definition of precise mechanisms of cell adaptation to severe hypothermia with great translational potential.

Thus, learning from evolution obliges us to “respect” the anaerobic nature of stem cells to exploit their potential in regenerative medicine and harness them by manipulating the energetic metabolism.