Mark Howitt, CTO and Co-founder of Storelectric, explains why innovations in energy storage are crucial to combatting the challenges associated with the energy transition.

The electricity transition is, at its heart, very simple: changing from fossil fuels to clean ones. At least 90% of clean fuels will be electricity or hydrogen (or fuels made from them), and the hydrogen itself will mostly be made from renewable electricity. To work, technologies have to be on the scale of the hydrocarbon technologies they are replacing – on an infrastructure scale, always available when required. With its energy storage and hydrogen solutions at grid and infrastructure scale, Storelectric works to address the biggest issues of the energy transition. 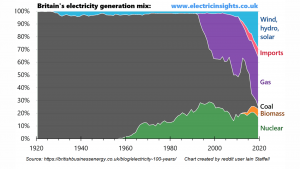 Therefore, the challenges are about transforming intermittent into baseload and dispatchable, and asynchronous into synchronous.

All other ways of looking at the issues merely complicate matters and make the transition harder and costlier to manage, while reducing both reliability and resilience. The lessons are simple: the electricity system will be unaffordable, unreliable, and fragile unless:

If not dealt with in this way, it could lose both public and political support for the energy transition. However, if it is dealt with simply, strategically, at suitable scale and with a whole-system approach, then it will be affordable, reliable, and resilient. Storelectric’s Compressed Air Energy Storage and hydrogen technologies achieve all of this, in ways that are uniquely cost-effective, capable and efficient, and uniquely configurable for very diverse applications, projects, and systems.

The biggest challenges for hydrogen

Hydrogen is needed as it is portable, transportable in pipelines, energy-dense, lightweight, and can be used as a feedstock in many processes such as fuel synthesis and replacing coal in iron and steel making. It is therefore as versatile as electricity, but in different and highly complementary ways.

Hydrogen in the gas grid

Hydrogen is an excellent replacement for methane in gas grids. In much of the developed world, gas grids have been modified over recent years to be hydrogen compatible with, for example, polyurethane pipes and better seals to contain the smaller molecule and avoid embrittlement.

It is not a simple substitution – over 50% more gas volume is needed for the same energy output; and equipment needs modification because its flame characteristics are different. This is one reason why the roll-out of hydrogen grids should not be by steady increases in the proportion of hydrogen in the gas mix: that would entail multiple conversions of equipment – very costly and disruptive. It is better to convert localised areas to 100% hydrogen in one single conversion, then to expand into other (usually neighbouring) areas as hydrogen becomes available cost-effectively.

Another reason not to convert the gas incrementally is because most of the best uses of hydrogen (e.g. chemical and industrial processes, transportation, fuel cells) need pure hydrogen. Most of the applications that do not need pure hydrogen – essentially, burning it for heat – are less efficient and costlier than using electricity.

Therefore, the best way to roll out hydrogen in the gas grid is by starting with industry-based hydrogen hubs and then gradually expanding the pure-hydrogen grid into neighbouring areas until the hubs join together. In the meantime, there can be low levels of hydrogen (up to 15%) in the remaining gas grid, but this should be aimed below levels that would require widespread modifications.

To support this, hydrogen must be stored at grid scale. By far the most practical and cost-effective way is in salt caverns just like Storelectric uses for CAES – therefore, the company offers both.

Many propose hydrogen for grid-connected electricity storage, for which it is NOT suitable other than for inter-seasonal storage – and that may never be required as the seasonality of different renewable generation technologies differ, so the right mix of each (and maybe a small surplus) would eliminate the need for such storage. However, there are inter-year variations in output, and some analyses demonstrate how such a system would work economically with significant amounts of hydrogen generation.  But, after exhausting its store of air, Storelectric’s Hydrogen CAES can continue operating as a hydrogen power station. 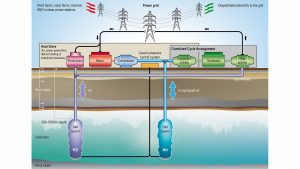 For shorter durations (hours, days, and weeks) CAES is much more efficient: the electricity – electrolysis – storage – power generation round trip cycle efficiency is currently barely 20% and can never (even theoretically) climb above the low 40%s: Storelectric’s Hydrogen CAESTM is 57% standalone (>80% with heat networks) and Green CAESTM is 67-70%. And the equipment for such a round trip is much more expensive for hydrogen than for CAES.

Storelectric’s CAES technologies are ‘head and shoulders’ better than all other large-scale, long-duration electricity storage technologies, when considering all the factors including capital and operational cost, breadth of capability, configurability, and geographical roll-out potential.

Many propose hydrogen for balancing intermittency of renewable generation, for which it is very ill suited. Firstly, flexing the electrolysis process only addresses intermittency: it ignores variability of electricity demand, only doing half the job that CAES can do. Secondly, such flexing needs 2.5 to 8 times the amount of expensive electrolysis equipment than if supplied by baseload electricity, which appropriate configurations of CAES can provide.

Hydrogen CAES is diabatic, burning gas to add the heat of expansion. The equipment to do so is hydrogen compatible, so will burn hydrogen increasingly as it becomes available cost effectively. Storelectric also plans a hybrid version of its adiabatic Green CAES in which hydrogen would double duration during times of need, such as Black Start.

CAES enabled electrolysis and other processes

Electrolysis (and fuel synthesis) hates intermittent power supply: it reduces both efficiency and plant life, while also requiring much more equipment per unit of gas output. This is another fallacy behind the proposal to use electrolysis to balance intermittent generation.

Therefore, removing the intermittency before it gets to the electrolyser will improve the plant’s cost effectiveness and operational life. The same applies to energy-intensive chemical processes, such as fuel synthesis or such as making ammonia and methanol, and industrial processes, such as iron and steel making.

Splitting water into hydrogen and oxygen relies upon applying energy to break the bonds of the water molecule. In electrolysis, that energy is provided by electricity, often using catalysts. But providing heat can reduce the electricity consumed. Storelectric has patented the use of the heat of compression to support electrolysis. This is currently a concept that needs developing into a commercial system.

Non-energy services to the electricity grid

Operating costs other than energy

Most people discuss electricity storage as though the challenge were just energy: balancing renewables, providing enough energy when they are not generating as much as is needed at any given time. In terms of operational cost, that is just a significant minority part of the challenge. In fact, the overall challenge has many elements, including:

The following looks at the overall non-energy costs of running the system using British numbers, the lessons are valid for most grids worldwide – those that are less decarbonised have the time and opportunity to prevent these issues with the right kind of electricity storage.

Without sufficient suitable storage, in the UK the non-energy costs of grid operation (to which Balancing Services Use of System [BSUoS] charges approximate) start to rocket, rising exponentially. 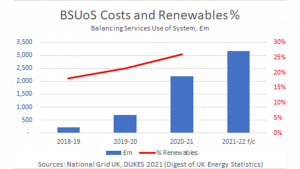 The 2021-2022 forecast costs were expected to be exceeded substantially, as have all National Grid’s previous estimates such as inertia costs and minimum grid currents (see below for further information). National Grid did not publish the outturn, but obtained approval to defer some costs to subsequent years.

However, even if we accept National Grid’s forecast, there was a 14x increase in 2021-2022 from just three years before. We expect most grids to suffer similarly when their renewables penetration exceeds ~16%. Below that, there is enough power station generation to accommodate the ‘disturbances’ from renewables of intermittency and asynchronicity without great effort – above that, the scale of the disturbances is growing while the power stations available to deal with it are reducing in number.

On 24 May 2020, nuclear (which should never be turned down if at all avoidable) was turned down by a few hundred megawatts (MW). Gas-fired power stations were turned up by almost 2GW, interconnectors down by almost 1GW, and wind down by over 1.7GW. Reasons include: 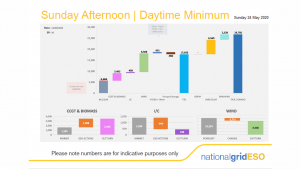 A constraint is a system bottleneck. Imagine a town with a roundabout between employment and a residential area the other: the roundabout is a constraint. Traffic lights, roads converging a constriction (such as a bridge), narrowing of the roadway, and roadworks also usually create constraints. Similarly, on the grid, substations, stretches of cabling, other equipment and work on the network all form constraints.

National Grid’s own breakdown of the costs of such actions, for the week of 10-16 January 2022, are: 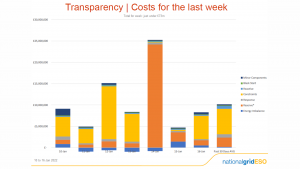 The two biggest elements are constraints and the need to maintain reserve availability.

Ignoring (for the time being) the fact that nearly all interconnectors are DC links so have no natural inertia, and considering energy flows alone: since Russia invaded Ukraine, countries have sometimes had insufficient output to support neighbouring countries’ shortfalls, and interconnectors failed to provide the required energy during times of system stress (high demand and/or low output). A typical time of system stress is a windless winter evening and overnight: such times are largely concurrent throughout Europe. We have been proclaiming this inevitability in general terms since 2016, and quantified by a study of European national energy transition plans since 2018.5

Without suitable volumes of large-scale, long-duration and inertial electricity storage, curtailment rates have been shown worldwide to rise almost linearly with renewable penetration.

The effects on electricity bills

As a result, wholesale electricity costs have dropped to 38% of our electricity bills, the remainder being system running costs, levies and charges.6 That wholesale cost is itself made up of the cost of energy plus the various charges on generators. Therefore, the actual cost of energy is only 20-25% of the final bill, down from 75-80% just a decade or two ago.

Looking ahead at the electricity transition

These problems will only get worse as the energy transition progresses, unless they are addressed by sufficient large-scale, long-duration, naturally inertial electricity storage to power each grid.