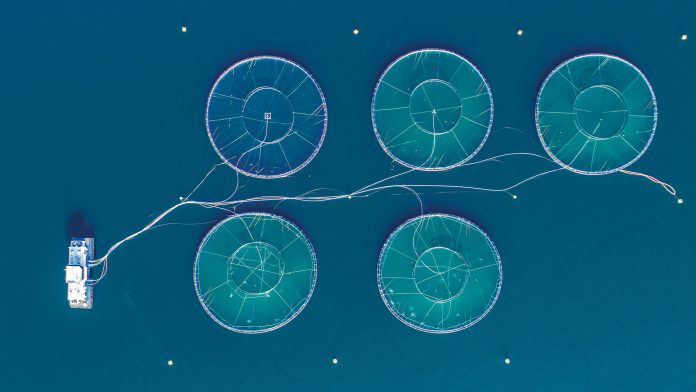 In the face of plastic pollution, global warming and overfishing, can sustainable aquaculture offer a solution to our procurement needs?

Aquaculture production, the rearing and harvesting of aquatic animals and plants, is a technique that is not hugely prevalent within Europe – however, across the world this kind of farming is becoming a more popular way to procure food. As overfishing sets itself apart as a major problem regarding the sustainability of our food, and as global warming and the plastic in our oceans causes dramatic consequences for fish populations – different methods of food procurement must now be harnessed in order to ensure we do not end up with shortages across the globe.

As the population of people on the planet increases so will the demand for food – including fish. However, fishing is not necessarily sustainable and so different methods of procuring fish and other food stuffs will have to come to the forefront of food production in coming years.

To find out what aquaculture can bring to the blue economy and how fishing policy can contribute to the sustainability of fishing industries, Innovation News Network spoke to Kathryn Stack of the Federation of European Aquaculture Producers (FEAP).

What are the issues facing aquaculture with regard to sustainability? How can we achieve greater sustainability across all levels?

Aquaculture production in Europe has effectively stagnated over the past years while production elsewhere across the globe is booming. The high standards demanded by customers must be maintained whilst retaining the flexibility to grow.

Regulation must be workable and have realistic objectives. We cannot have a one size fits all approach given that we have very different operations across Europe with different concerns and conditions; what works in one country or in one operation may not work for another. Regulation is essential but it cannot hinder progress before it has even begun.

The issues of animal health and welfare are very much part of the current conversation surrounding aquaculture. Health and welfare are hugely important for the consumer but also for the producer. Naturally, it is in the interests of the producer that their fish are healthy and well. However, what works for a large producer who has the economies of scale to invest in this area does not work for the smaller producer. For our EU members, access to European Maritime and Fisheries Funds (EMFF) should facilitate this transition, but what we are seeing is a huge difficulty in accessing these funds which is preventing producers from meeting the requirements set out by the authorities.

What can sustainable fishing operations bring to the blue economy? Why is it so important to encourage sustainable aquaculture?

The current 7.4 billion people in the world is expected to increase to over 9.8 billion by 2050. This implies an equivalent increase in the demands on water, energy and other needs, including fishery products. A simple calculation shows that the world will have to increase fish production by around 1.5 million tonnes per year from now to 2050 in order to guarantee the current level of fishery product consumption worldwide. This amount of fish will not come from fishing because, as Food and Agriculture Organization (FAO) has been informing us for years, fishing has now reached the maximum sustainable limits.

The only available option to fill the gap between production and consumption is to further develop the sustainable aquaculture sector. This solution is something that the EU has strongly believed in and supported for years. If the EU sector is not able to grow faster in the next few years, we may not be able to consume the levels of seafood that we enjoy today.

How can technology and systems be used to improve sustainability? Is technology used for monitoring and collecting data, or for the practice itself?

Technology is key to driving the aquaculture sector and comes in many forms. Digitalisation will bring new revenue streams and increase production. Improved feeding systems will not only reduce costs but will have a positive impact on the environment. Biotechnology will allow for improved treatments of diseases. More investment in machinery will lower the costs for the smaller producers – for example new slaughtering techniques to improve the welfare of the fish, improving the feed conversion ratio or monitoring biomass to reduce mortality rates. However, it is important to remember that the big investments in these areas are by the larger enterprises. Policy-makers should bear this in mind when implementing regulations on the producer. Likewise, sometimes it is not only about the cost of investment but the fact that the technology may not even exist for certain smaller operations of the species they farm.

We are currently witnessing further exploration into the possibility of offshore farming which could radically change the future direction of sustainable aquaculture and many are even operational. Norway has recently installed a 100m pen in the open sea after having worked closely with engineers from the offshore oil and gas sector. If we consider that oil platforms are prevalent in our seas, either active or inactive, the structures are already in place and ready to be used.

There is real potential here for offshore to be another tool in the toolbox. However, we need to remember that there must be a mix of operations for aquaculture to be truly diversified and sustainable. Freshwater is a very important sector of aquaculture, representing not just a big part of production but also playing an important role in maintaining the environment. Aquaculture will always operate in freshwater, marine and on land and no one system is better than the other. They all play a role.

How beneficial do you think the Common Fisheries Policy is in regulating and policing sustainable aquaculture? What more can be done at the EU-level to achieve widespread sustainability?

Aquaculture, while legally under the Common Fisheries Policy, falls under a larger regulatory framework. There are EU rules surrounding health and hygiene, medicines, welfare, feed, environment and labelling, but many rules are also applied at the national or local levels. For example, the licencing of fish farms and approval of potential sites for farms takes place at the local level; access to funding from the EMFF takes place at the national or regional level and water quality takes place at all three levels.

This apparent disconnect creates a somewhat unharmonised system where some Member States are developing quicker than others and also, a system where the onus is on each of the 28 Member States to really invest – acknowledging aquaculture as a key player in future food security. The Member States should further support the development of producer and interbranch organisations in order to really facilitate regulatory initiatives between producers.

What does the future landscape look like for sustainable aquaculture in the EU?

FEAP has recently celebrated its 50th birthday so the organisation has really taken time to look back on how far it has come. But it is equally, if not more important to now look at where we want to go. FEAP represents the voice of the aquaculture sector in Brussels and has not only built up a good working relationship with the European institutions but has been able to find internal consensus on many issues affecting the different operations across Europe. Our voice is much stronger when we come together as a sector, so it is important to maintain this momentum.

It is also important to communicate our work as producers – not only to decision-makers and stakeholders, but to the wider audience as well. Aquaculture provides the solution to the limited stocks of the extractive industry of fisheries.

A big issue we need to address at the European level is the issue of the level playing field with regard to third-country imports and we must help the EU better understand all our concerns. Our European producers must follow hundreds of rules in the EU and third countries do not face the same level of scrutiny. We cannot compete with non-European producers who are not obliged to follow the same rules and who also benefit enormously from our adhering to them. Sustainable aquaculture in the EU can have a great future if only because it represents the only solution to meeting the EU’s internal seafood demand.