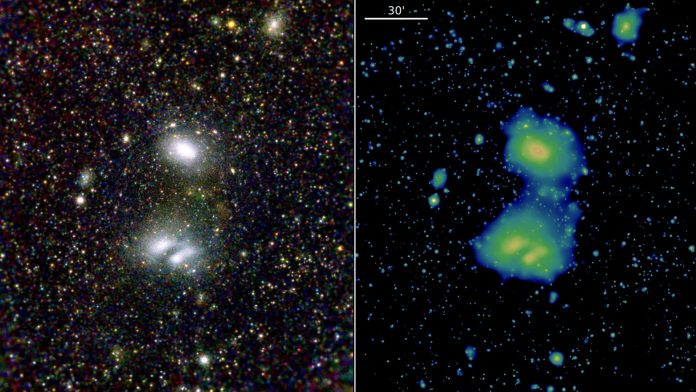 Argelander Institute for Astronomy contribute to the imminent revolution in our understanding of cosmology, galaxy clusters, and supermassive black holes.

AT the Argelander Institute for Astronomy, the ‘Dark Energy Team’ study cosmology, galaxy clusters, and supermassive black holes over a range of wavelengths including X-ray, optical, and radio data. For instance, they perform X-ray satellite observations of large samples of galaxy clusters.

Galaxy clusters, the largest and most massive clearly defined structures we know, are strong X-ray emitters. Space-based X-ray telescopes provide the most detailed view of the ~100 million Kelvin gas in clusters. The team use their observations to study physical processes, such as cluster collisions or the interaction of cluster gas with outbursts of central supermassive black holes, and also to constrain the amount of dark matter in the Universe as well as the nature of dark energy. They are involved in major upcoming X-ray missions that will revolutionise our understanding of the hot and energetic Universe.

Innovation News Network speaks to Group Head, Thomas Reiprich, about some of the team’s latest developments and findings.

Can we begin with you giving us an introduction to the Athena X-ray observatory?

Athena is ESA’s next large X-ray observatory to be launched around 2031. X-rays are emitted from regions of space that are hot and wild; Athena will revolutionise the study of this hot and energetic Universe. For instance, it will reveal the properties of supermassive black holes and galaxy groups and clusters in the young Universe.

What are galaxy clusters, and how can X-ray telescopes be used to get a more detailed view of them?

Galaxy clusters are the biggest objects in the Universe. They are a million billion times more massive than our Sun, and almost 90% of their mass is in the form of dark matter. They consist of hundreds to thousands of galaxies, yet, the mass of all stars in all cluster galaxies together makes up only about 10% of the mass of normal matter. All the remaining normal matter has been heated up to 100 million degrees (hotter than the centre of our Sun), for example by cosmic collisions and subsequent mergers of smaller galaxy groups. This hot gas is not limited to individual galaxies but traces the gravitational potential induced by the overwhelming dark matter. As a result, it traces the galaxy cluster as a whole. This hot gas is invisible to optical telescopes but with X-ray telescopes we detect and characterise its energetic emission.

Can you tell us about the SRG/eROSITA X-ray telescope? What were the first targets it observed?

The eROSITA X-ray telescope on board the Russian-German SRG mission will revolutionise the field of X-ray sky surveys. The primary science driver is the study of dark energy by discovering about 100 thousand galaxy clusters; currently we know only a few thousand X-ray clusters. SRG was launched from Baikonur on July 13 2019. On October 22 2019, the ‘First Light’ images from eROSITA were presented to the public, and they look really fantastic. eROSITA scanned across an interacting galaxy cluster system, uncovering an X-ray bridge of hot gas connecting the individual clusters and, on larger scale, clumps of matter being pulled from the surroundings by the enormous gravitational attraction of the cluster system (see figures). Already these very first images are scientifically quite exciting and the work to exploit them in detail is in full speed within the eROSITA team.

What would you say has been the most interesting and/or surprising discovery/finding of your career so far, and how did you come across this?

One great thing about science is that as soon as one starts scrutinising anything in detail, one realises how much is unknown. It’s not hard at all to find unsolved problems and unknowns, they’re all over the place, and they can be tackled when investing time and effort. However, for me personally, the most interesting discoveries are the unexpected ones. For example, one tries to make a more precise measurement of some quantity that has already been studied before and then finds that the measurement deviates from the expectations, maybe even from previous measurements. Also this happens more frequently than one might think. For instance, when we determined the mean matter content of the Universe and the matter fluctuations using a sample of about 60 galaxy clusters many years ago, we found their combination to be unexpectedly low. This riddle is still with us today, with much better measurements, and may even point to some important missing physics or cosmology piece.

Can you tell us about some of your upcoming projects?

In the eROSITA team, we are preparing for very precise measurements of the matter content and fluctuations, using 100 thousand galaxy clusters. We hope this will also shed light on the nature of dark energy. A crucial ingredient for bringing to bear this huge statistical power is an accurate total mass determination of these galaxy clusters and we are working towards this goal.

Thousands of undiscovered ancient lakes may have supported water on Mars

New research from HKU suggests that thousands of Undiscovered ancient lakes may have supported water on Mars.
Read more

Astronomers say they have found ‘smoking gun’ evidence of a new small planet located within a protoplanetary disk.
Read more

Missing moon may have caused Saturn’s rings and tilt

A new study performed by MIT astronomers suggests that an ancient, missing moon may have caused Saturn’s rings and the planet’s tilt.
Read more

A study has uncovered the enigmatic source of diamonds from outer space known as lonsdaleite, an extremely rare, hexagonal form of diamond.
Read more